#StopRush turns on itself, devolves into name calling, accusations

#StopRush turns on itself, devolves into name calling, accusations

There are times it’s good just to be a spectator.

I’m not going to try to sort this out, I’ll just note that the “Stop Rush” movement has turned on one of its most prized Twitter activists, or that activist has turned on it, depending who you believe.

I don’t care to believe any of them, I’ll just alert you to the theatrics.

Twitter account @FarLeftOfRight was one of the most active accounts sending out anti-Limbaugh tweets to advertisers, apparently controlling several accounts to send out identical tweets simultaneously (image from 4-19-2012): 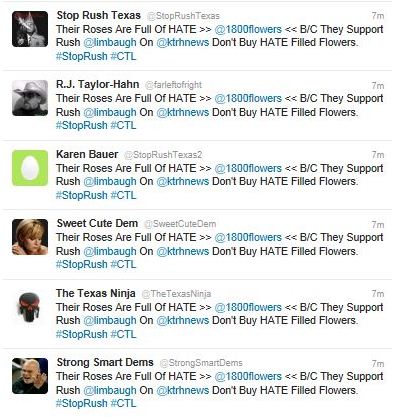 Matt Osborne was another key player in the Stop Rush movement.  He wrote a hit piece on me (no linky), and now is involved in an online fight with @FarLeftOfRIght, with some highly inflammatory accusations in a lengthy blog post, as well as some even more inflammatory accusations in the notes to a YouTube video.  Osborne also is trying to convince people to unfollow: 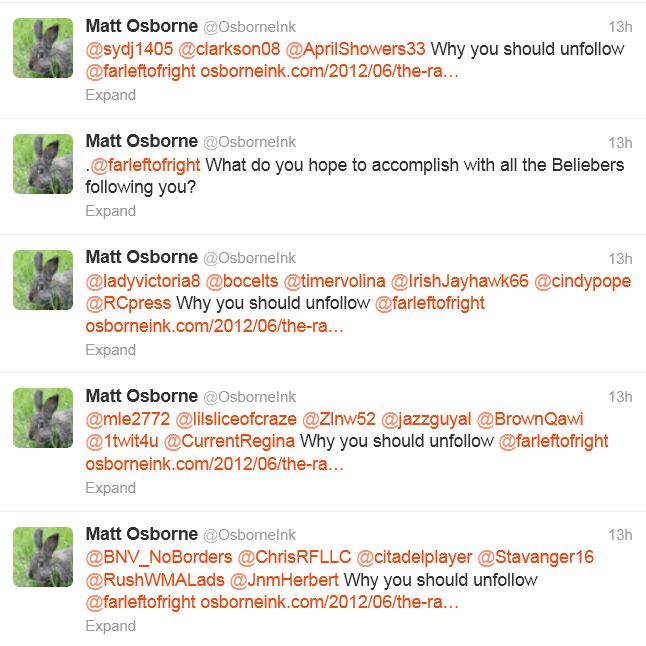 Who’s right and who’s wrong?  I’m not about to spend the time sorting it out.

It’s just worth noting that the Stop Rush movement is eating its own.  A fitting end.

“It’s just worth noting that the Stop Rush movement is eating its own.”

Part of the natural order with snakes, spiders, and rats under stress.

#OWS, #StopRush, #WIRecall, #Fauxcahontas… what are our plans for dealing with the looming threat of Peak Popcorn™ come November?

Yeah, they are naasty. @Shoq is one of the worst. Check out my Twitter – Twitpic feeds; I’ve been hammering them for a while now.

And this reminds me of cuttlefish.

Our tent gets bigger. Their tent gets smaller, small-minded bigots that they are.

Every turkey has his Thanksgiving Day.

Every pig has his Christmas.

Every Robespierre meets his guillotine.

Every grave gets its last scoop of dirt.

Every elderberry bottle has its Passover finish.

Every bathing Marat meets his Corday.

Like wow. Had thought it mostly a waste of time dithering with Rush, but apparently it’s more fatal than that.

Every troll has his Tay Bridge…

And every loo has its water. Or something…

Every pseudo-intellectual has his (or her) Bill Maher.

You know what I’m talking about… right?

This comes from a Spanish proverb with many Latin American variations. “A cada cerdo le llega su nochebuena.” Google it.

Of course, bad people (and wine) (sometimes) get what’s coming to them.

Why did you misunderstand my understanding?

Quick! Send them both some handguns and ammunition.

No don’t do that. It’s not as if they can shoot straight. Better to just give them shillelaghs and let them have at each other.

Just be sure to get it posted on YouTube. I think they call it Bum Fights or some such.

A post pointing at the hyperbolic Left cannibalizing itself with name-calling results in a thread indulging hyperbole and name-calling.

There is no satire, anymore.

Five years plus three equals an unconscionable amount of time for you to stalk, rotten cherry-pick, and even make up stuff about someone to wreak ruin a la Alinsky and “creative destruction” (your citations, not mine.)

Have no idea what is in your head. I was foolish enough to believe and trust you on-line, only to be mocked and attacked for years now. You’ve called it revenge for my not being your GF in HS, decades ago.

Fine. Hope you and your little group have enjoyed yourselves with the extensive damage done to me and my daughter. I’ve limped on, after you succeeded in finally and brutally teaching me not to love or trust you ever again.

Am getting remarried in a couple of months to someone else from HS. Funny that.

Rags, do you have any idea what she’s talking about?