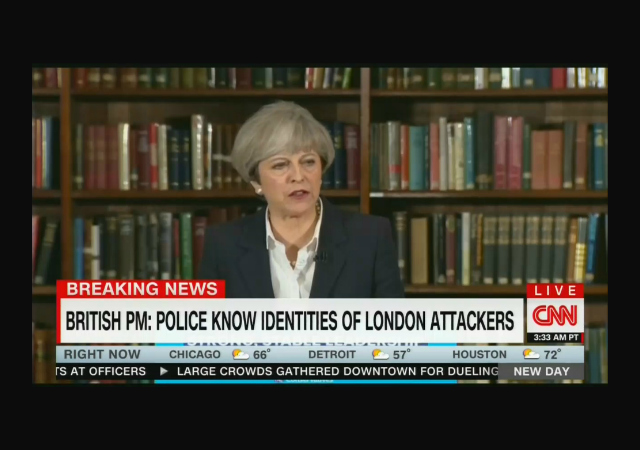 Theresa May: We Could Not Have “Predicted” or “Envisaged” Latest Terrorist Attacks

Posted by Mark Finkelstein on June 05, 2017 62 Comments
British PM Theresa May, in an address to the nation, stated that it wasn't possible to have "predicted" or "envisaged" the latest terrorist attacks in Manchester and London. Here's her statement, as broadcast on CNN this morning:

"We could never have predicted the tragic turn which events would take. We could never have imagined the appalling depravity which led a cowardly and callous killer to target innocent men, women, and children, in the way that we saw in Manchester two weeks ago. Nor could we have envisaged the brutal attack that was carried out on the streets of London Saturday evening."

Mr Trump made sure to show Mrs May the bust of Winston Churchill which he returned to the the office. Standing alongside Mrs May, Mr Trump pointed to the bust and said: "This is the original. It's a great honour to have Winston Churchill back." A smiling Mrs May responded: "Thank you, we were very pleased that you accepted it back." At one point Mr Trump had a large lamp moved to give the cameras a better view.

“Freedom of speech is a fundamental British value."...

Posted by Fuzzy Slippers on August 27, 2016 8 Comments
Despite concerns that Prime Minister Theresa May will not uphold the June 23rd Brexit vote, it doesn't look like she is willing to let a three-ring circus develop in which protesters tout bogus climate change links to Brexit or equally bogus claims of economic doom. The Telegraph is reporting that she will invoke Article 50—the mechanism outlined in the Lisbon Treaty for leaving the European Union—without a vote in the Commons, thus denying the "Remain" supporters the opportunity to block or delay Brexit. The Telegraph reports:

Theresa May will not hold a parliamentary vote on Brexit before opening negotiations to formally trigger Britain's withdrawal from the European Union, The Telegraph has learned. Opponents of Brexit claim that because the EU referendum result is advisory it must be approved by a vote in the Commons before Article 50 - the formal mechanism to leave the EU - is triggered. However, in a move which will cheer Eurosceptics, The Telegraph has learned that Mrs May will invoke Article 50 without a vote in Parliament

Posted by Mary Chastain on July 22, 2016 5 Comments
It looks like British Prime Minister Theresa May has become the next Margaret Thatcher as she dominated her first Prime Minister's Questions (PMQs). She said:

You refer to me as the second woman Prime Minister, in my years here in this House I've long heard the Labour Party asking what the Conservative Party does for women - well, just keep making us Prime Minister.