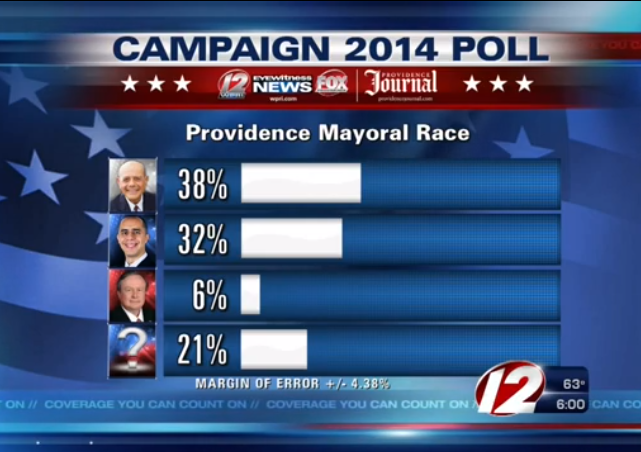 Posted by William A. Jacobson on September 26, 2014 4 Comments
Oh man. Good times could be just around the corner in the Capital city of my former home State of Rhode Island and [if you don't know by now how it ends, you obviously haven't been paying attention]. Remember, I said it: Buddy Cianci running for Mayor of Providence again, and he can win:

In his first act as Mayor of Providence, Buddy resigned in 1984 after being convicted of assaulting his wife’s alleged paramour with a fire log and lit cigarette. (Seriously.) Buddy had a comeback but in 2002 was convicted of running a criminal enterprise, namely, Providence City Hall. Cianci was found not guilty of 26 specific criminal charges. The only charge on which he was convicted was RICO conspiracy.... He can win. He absolutely can win. And that would not be a bad thing for Providence, which has been in a funk since Buddy went to the Big House.

That prediction appears to be coming true, as a Providence Journal / News 12 poll shows Buddy in the lead running as an Independent:
Read More 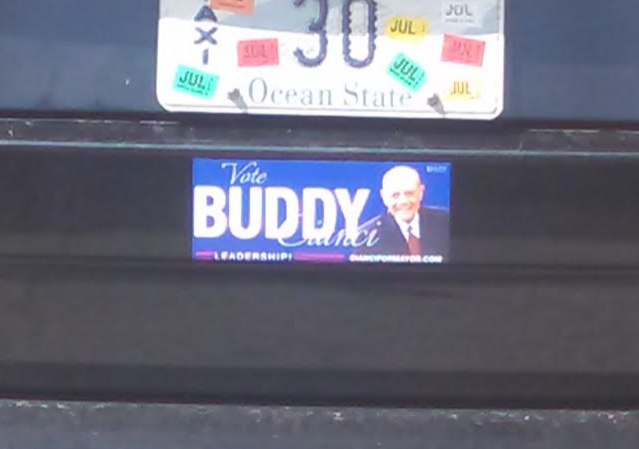 Posted by William A. Jacobson on September 09, 2014 8 Comments
I saw this bumper sticker over Labor Day weekend in downtown Providence, in my former home State of Rhode Island and Providence Plantations. My wife had seen one on a different car a couple of days earlier. Former Mayor Vincent "Buddy" Cianci has been covered here before regarding his conviction under the Racketeer Influenced  and Corrupt Organizations Act. In his first act as Mayor of Providence, Buddy resigned in 1984 after being convicted of assaulting his wife's alleged paramour with a fire log and lit cigarette.  (Seriously.) Buddy had a comeback but in 2002 was convicted of running a criminal enterprise, namely, Providence City Hall. Cianci was found not guilty of 26 specific criminal charges. The only charge on which he was convicted was RICO conspiracy. Buddy has been out of federal prison for several years, and has a very successful radio show.  He is still adored by many, regardless of his legal problems.  He is a natural retail politician. Politics is in Buddy's soul, and he's running for Mayor again as an Independent:
Read More 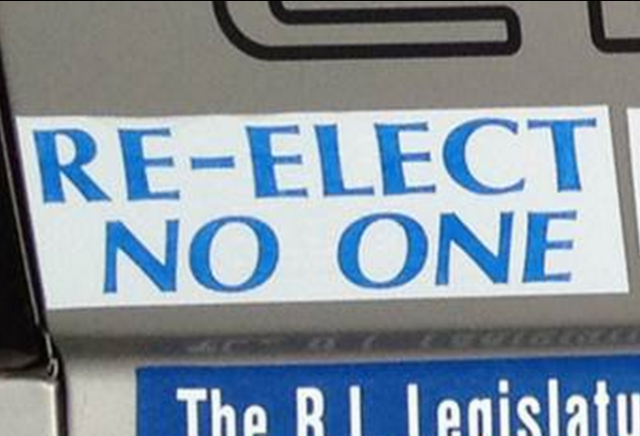 Posted by William A. Jacobson on August 09, 2014 6 Comments
From Tony at Redneck Republic in my former home State of Rhode Island and [do you know the rest of the State's name?]:

This is the Tailgate of a Chevy 4X4. I took the Pic just a few hours ago Riverside Rhode Island. Started jawin’ with the owner, another riled Redneck with plenty to say bout Government. 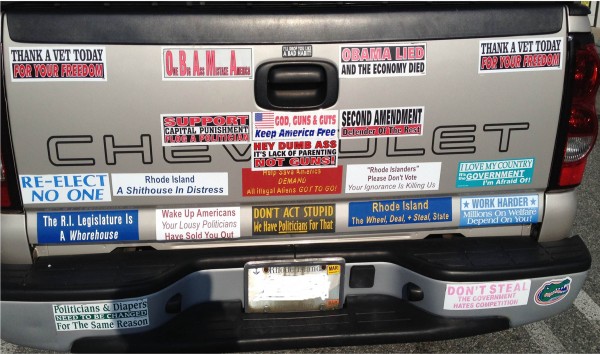 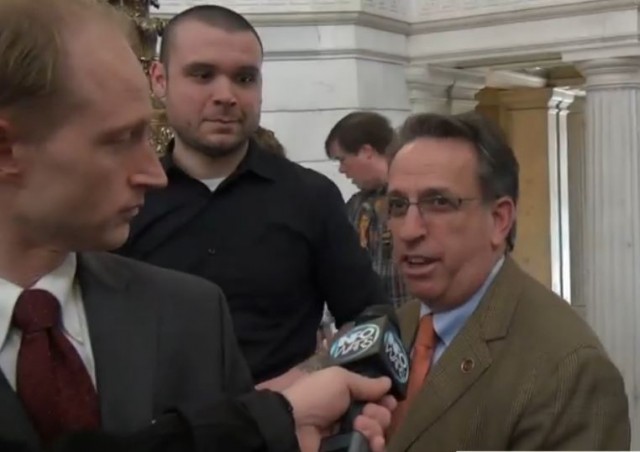 Posted by William A. Jacobson on March 25, 2014 40 Comments
Oh, how I miss my formerly home State of Rhode Island and Providence Plantations. A State run by the best and the brightest -- and the indicted and the investigated and the Democrats and the Unions. Just a few days ago the feds and State Police raided the office and home of the Democratic Speaker of the House of Representatives -- who has since resigned as Speaker. Among other things, there is a huge legislative push for more gun control legislation, as reported by ABC6:

Some Rhode Island lawmakers...are again taking aim at gun control. No fewer that nine bills are now being considered - from banning assault style weapons; to boosting sales tax on ammunition; and, limiting gun clips to no more than ten rounds. "People do have the right to own a gun. I believe in that. But I think there's also a new type of responsibility that has to come with controlling a gun and the guns that go out into the street," said State Rep. Joe Almeida (D) Providence, who sponsored three of the bills. Gun owner's rights advocates are already firing back. "We're in an election year and there is an element of this that is obviously election year antics," said State Rep. Mike Chippendale (R) Foster.

The arrogance of the politically powerful is demonstrated in this response by Democratic State Senator Josh Miller and an unidentified compatriot (added -- apparently a photographer accompanying Miller) to a question regarding the pending legislation. Miller describes himself as "[o]ne of the true "left of center" Democrats of the R.I. State Senate." The questioner, Dan Bidondi, has a radio show and is affilated with Alex Jones' InfoWars. Here's the video:
Read More 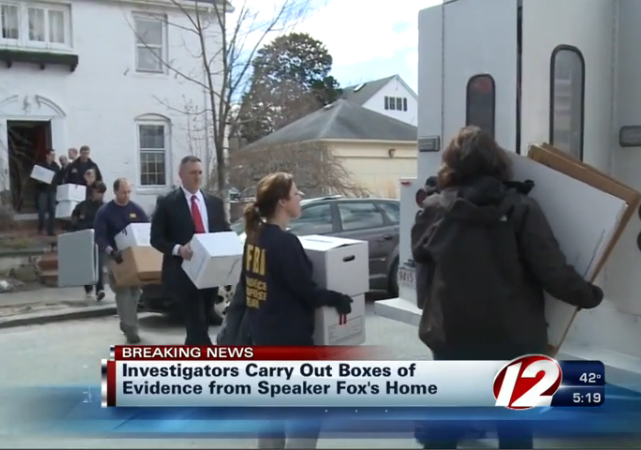 Posted by William A. Jacobson on March 22, 2014 32 Comments
The most powerful politician in my former home State of Rhode Island and Providence Plantations is not the Governor. It's the Speaker of the House. And Mr. Speaker, Gordon Fox, is stepping down as Speaker after the feds and state police raided his office and home yesterday. Projo reports:

On the day after state and federal investigators raided his State House office and home, House Speaker Gordon D. Fox has announced his intention to resign as speaker. He issued this statement:

“The Rhode Island House of Representatives is an institution that I deeply respect and serving my constituents has been a major part of my life for the past 22 years. I will not let yesterday’s events distract my colleagues from addressing the challenges facing Rhode Island.” “Because of the respect I have for all members of the House of Representatives, I am resigning as Speaker. The process of governing must continue and the transition of leadership must be conducted in an orderly manner.” 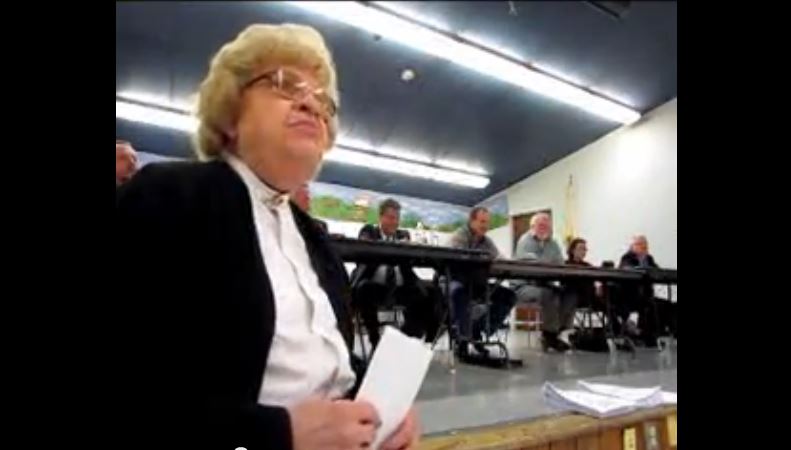 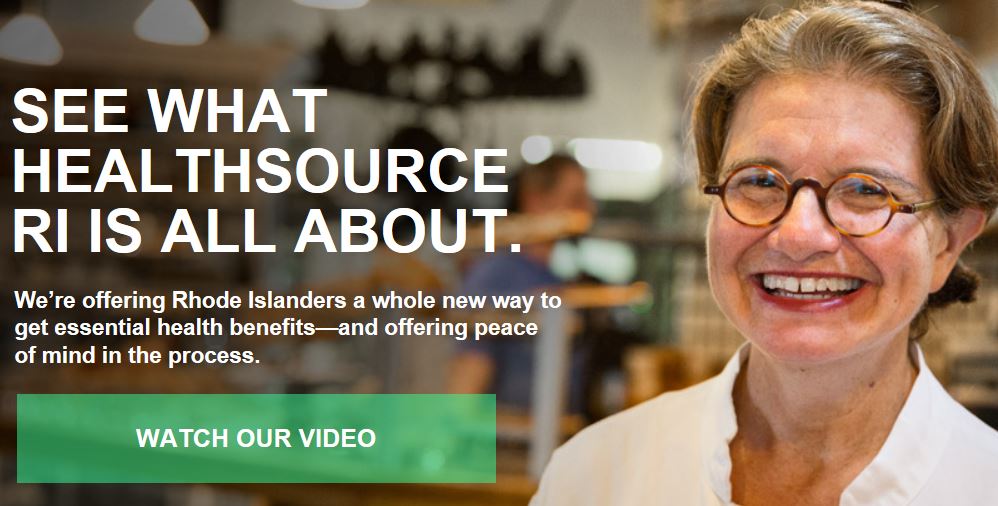 One thing you have to remember about Obamacare is that much of the financial pain, such as steep penalties, is back ended so that by the time people wake up to reality, the law has been operating for years and it's too late. Here's yet another...

No longer of Rhode Island and Providence Plantations

My home State of Rhode Island and Providence Plantations has provided much material for Legal Insurrection over the years, including the dispute as to the name itself. Splitting the year between Ithaca and Rhode Island provided me with the distinction of having Patrick Kennedy and Maurice...

Maybe we can sell the Superman Building to Detroit...

Father-daughter dances, currently banned in Cranston, Rhode Island after the ACLU  and a single mother threatened to sue under the state anti-discrimination law, are one step closer to reinstatement. The Rhode Island Senate has approved language amending the law to allow single-sex events if comparable events are...

There was a lock down of the University of Rhode Island campus in Kingston today after reports of a possible gunman on campus. Lockdown lifted at URI Kingston campus; police say no evidence of shooter The Providence Journal had live coverage including a Twitter map showing locked-down students tweeting...

Rhode Island has the highest unemployment rate in the country, it's crushed by unsustainable public sector salaries and pensions which are protected by union control of the legislature and politicians at every level, it is one of only two states losing population and may lose one...

Currently, the Ocean State is "the most anti-free-market, anti-family, and anti-jobs state in the entire country."...

Pray for the water pipes of Rhode Island

Much of the State of Rhode Island and Providence Plantations is without power as the result of the Snowzilla/Snowmaggedon/Blizzapocalypse of 2013. Including my house. Pray for our water pipes. Update 2-10-2013 9 a.m. -- They're still dripping.  One of the few times a drip is a good thing. and...

Like I told you, in Rhode Island unions are the state

I have pointed out before how In RI, Public Sector Unions Are The State and how behind almost every Democratic politician there stands a union. So the latest news is not surprising.  Via ProJo, Laborers' union again gives two R.I. Senate leaders six-figure compensation: Annual reports showing the...

From The Providence Journal: "IPlead ThePiff" posed on his Facebook page with marijuana, money, a delivery guarantee -- and guns. "I don't talk," he wrote on one photo. "I let my guns sing and if a ...

BREAKING!!!!!!! The straight party line vote in my home State of Rhode Island and Providence Plantations is an important tool of Democratic Party control -- just check one box at the top and you're done.  That box almost always will be Democratic in the most Democratic state...

My home State of Rhode Island and Providence Plantations is under the foot of the unions and the Democratic politicians they control. This tiny beautiful state is politically pathetic, with a voting death grip on big goverment. It's a death spiral, as witnessed by the...