RI State Rep. Patricia Morgan: Keep Critical Race Theory Out Of Schools, “it is a step backwards for our country”

RI State Rep. Patricia Morgan: Keep Critical Race Theory Out Of Schools, “it is a step backwards for our country”

Introducing her proposed legislation: “Leave those children alone. Stop subjecting them to neo-racism and race shaming. It’s destructive…. We would never accept race shaming if it was directed towards black school children. We should not accept it when it’s directed at white school children. And that is what is happening in our schools.” 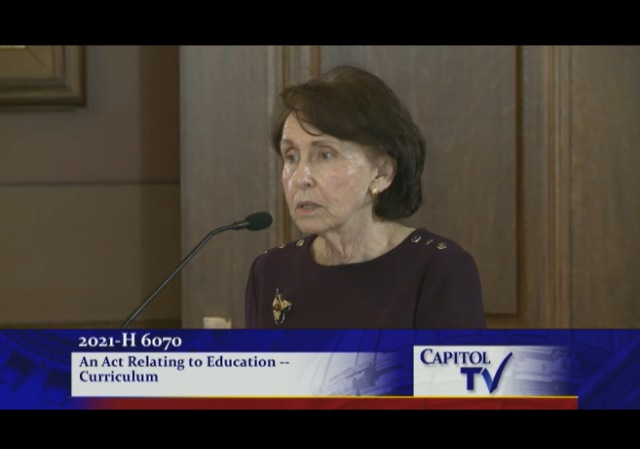 Rhode Island House Representative Patricia Morgan filed a proposed bill that would prohibit the teaching in public schools or by entities that receive public fundings of concepts, like Critical Race Theory, that demonize or attempt to shame people based on race.

You can read the proposed bill here.

My own feeling is that race shaming and demonization should not be publicly funded. This is a subset of the principle that schools and other entities that receive public funding must comply with state anti-discrimination laws and regulations in order to get that funding. But the language of such proposed legislation has to be narrowly crafted.

There were questions raised to some of the wording and scope. Rep. Morgan would have been amenable to reasonable amendments, but because Rep. Morgan is a Republican in a House and state completely dominated by Democrats, however, there was little chance of even a perfectly drafted bill being passed and signed by the Democrat Governor. Yet she raised important issues that are rarely talked about publicly in Rhode Island.

The Rhode Island House Education Committee held a hearing on the proposed bill on March 31, 2021.

Rep. Morgan planned on calling several nationally recognized experts in the field to give robust presentations, including Wenyuan Wu, James Lindsay, and Ian Rowe. But all speakers from all sides were limited to one minute because almost 150 people signed up to speak in opposition to the bill. As was revealed on the full video, it became clear that some of the surge of sign ups was the result of one or more high school teachers encouraging students to object as a school assignment. The Chair of the Committee commented on this.

You can (and should) watch the full video here (this bill discussion starts at 1:30:00) and over 300 public written comments here (it’s bill H6070). The comments and testimony from teachers are very troubling, and an example of how deeply CRT has penetrated the educational system at the teacher level.

You also can view Rep. Morgan’s appearance this morning on Fox and Friends here.

Rep. Morgan gave an impassioned explanation of the reasons for the proposed bill, and why CRT should not be part of our educational system. It’s worth a watch and a read (auto-generated transcript below). You can stand and cheer at the end.

Representative Morgan, welcome. Take as much time as you need to explain the bill.

My bill seeks to ban a destructive and divisive ideology that is termed, “Critical Race Theory,” from our schools and from any entities that do business with the state of Rhode Island and receive government money.

He said that he looked to a day when people would not be judged by the color of their skin, but by the content of their character. That was the goal. And I embraced it and have tried to live my life that way. And I think America embraced it. We not only held America accountable to our founding documents, the Declaration of Independence, the First Amendment, the 14th Amendment, but we strengthened it with the Civil Rights Act of 1964. We fought segregation, and now it’s coming back. Critical Race Theory is the opposite of Martin Luther King’s goal for our country.

The goal of CRT is to find racism in every part of American society. It seeks to impose a new segregation on us. We’re no longer to be judged as individuals, but instead as members of a group, and those groups are determined by the color of our skin. And we are given the titles of “oppressor” and “oppressed,” “perpetrator” and “victim.” It just is so anti-American values that it alarms me, and it frightens me for our children. One of the things that I think is most insidious about it is it looks at unequal outcomes. You know, I was a special education teacher, and you can’t give people the same outcomes. There’s so much in the course of our lives that make the outcomes of our lives come out differently.

The proponents of CRT look at unequal outcomes and say that they happen because of racism. And it’s insidious because it negates meritocracy, the idea that, if you work hard, and you put effort in and that you persevere, if you make good decisions, that you will succeed, that you will get your little piece of the American Dream. I think the fact that it negates meritocracy is depressing because what it says is the only thing that matters is the color of your skin. That your character doesn’t matter, that your effort doesn’t matter. And that the only way for one person to rise is for them to tear down another.

I have been challenged by a member of the news media who said, “Well, look at Providence schools, what a mess they are! You can’t say that racism doesn’t exist in Providence schools. Compare them to Barrington. You can’t say that Providence doesn’t have racism.” What Providence has is mismanagement. And a lot of it. What Providence has is a lot of bad educational leaders who have allowed the schools to not meet the challenges and not deliver good educations to their students. I actually looked up and Providence spends a thousand dollars more than the average for the state on education. We give Providence all the resources that they need. The per-pupil costs are higher than the average. It was mismanagement there and not racism. But CRT would have you believe that everything is racism.

It’s just not true. I’ve also been asked, “Does this mean we can’t teach history?” Of course not. I was taught history. I know about the Civil War. I know about all of the bad things that America has done as it’s been growing. [In] America more than any other country, we’re hard on ourselves for the feelings of our past, but we learned from them. One of the wonderful things about America is it always strives to do better.

When children are exposed to neo-racism and race shaming, it is a step backwards for our country. It brings new segregation. A school child in Warwick doesn’t have any control over what happens nationally, or even in Providence. Their skin color has even less to do with what’s happening in Providence. Leave those children alone. Stop subjecting them to neo-racism and race shaming. It’s destructive. And it makes other problems worse. It threatens the cohesiveness of our American culture.

The answer to racism is not more racism. The answer is not a new kind of racism, a new kind of segregation. Race shaming is not the answer. The answer is the goal that was set down by Martin Luther King seventy years ago. And that is that we don’t [ever] judge people by the color of their skin, but instead know them as individuals and accept them by the content of their character.

We should be wary of anyone who exercises liberal license to indulge and normalize diversity dogma, not limited to racism.

Good for her. Our Constitution did not, does not, discriminate by race, sex, class, etc. The principles are right and worth conserving.

Wow, maybe the RINOs should have done something when they actually had control instead of forcing Trump to issue an executive order that got wiped away instantly.

Meanwhile Bitch McConnell is now out there whining that the Democrats are spending too much after he used the $600 ‘covid relief’ as an excuse to go absolutely hog-wild with crony paybacks.

Critical Race crap is here to stay whether you like it or not. The Democrats will never voluntarily remove it and the RINOs don’t have the balls to stop it.

I’m proud to see that something good can still come out of Nazareth.

Her opponent trying to use Barrington schools as a comparison was ludicrous. I grew up in Barrington. I met exactly one black person in my life before going to HS in Providence, and she was the hire cook of a rich doctor in Bristol. Democrats in our circle would arrange to chum with her to be able to say that they had a black friend and so definitely couldn’t be racist.

Quoting Phil Ochs, “Some of out best Negroes are our friends!”

An early episode of Family Guy had the guys meeting for golf at the “Barrington Country Club” (i.e. in real life, the RI Country Club in Barrington) and having all the upper crust golfers who walked by the group point at Cleveland and say, “Oh, look, Wendell, it’s a Negro!” So I ain’t makin’ it up, Seth was right on the money.

Nope. I am not laying down and accepting the transformation to South Africa.

If you want to give up that is your choice.

I will stand and work with those who want to cooperate and respect each other. Yes, it is 2 steps backward, 1 forward right now. We can change that.

I have a hard time understanding why it’s so hard for people to point out that outright racism is bad.

In the words of Ibram X. Kendi:

When you start believing garbage like this, you’re so morally adrift that you don’t even recognize “outright racism” when you see it.

“One of the things that I think is most insidious about it is it looks at unequal outcomes. You know, I was a special education teacher, and you can’t give people the same outcomes. There’s so much in the course of our lives that make the outcomes of our lives come out differently.”

So correct. Yet CRT says, through intimidation, there is one thing only to determine outcome. Truth over facts. The single cause theory is over simplistic. Middle school stuff pushed by hustlers. The proponents can make it sound smart, but it’s more accurate to call it destructive, and them frauds.

Multiculturalism has failed miserably everywhere it’s been tried. Just wait for the day when the millions of Hispanic Catholics who are coming to this country are shocked to discover the Biden Administration labels them as white supremacists

Kudos to my friends in Warwick for electing a no-nonsense common sense Representative.

Rep. Morgan is certainly right, but nothing short of a public uprising will stop this. The Democrats want it to help them destroy the culture and impose Marxist rule, and the Republicans are too stupid and cowardly to stop it. Politicians won’t do the right thing without being forced to.

It’s refreshing to know not all the elected representatives in Prof. J’s home state have drank the kool-aide!