Spent 30 minutes espousing a grand theory of right-wing conspiracy, the same one he used against Brett Kavanaugh and Neomi Rao, while not asking Amy Coney Barrett a single question. 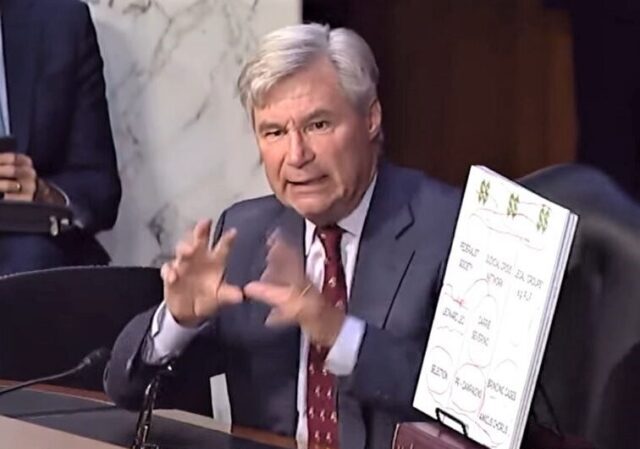 Rhode Island Senator Sheldon Whitehouse is nutter. A conspiracy nutter. It’s his personality, and it preceded the nomination of Amy Coney Barrett.

For Whitehouse, there are always “dark” right-wing forces lurking and manipulating behind the scenes. In 2010, he compared his Republican Senate colleagues to Nazis for opposing Obamacare. Dana Milbank of WaPo noted at the time:

Whitehouse’s performance in going after Brett Kavanaugh earned a lot of laughs as Whitehouse obsessed over yearbook entries about barfing and farting.

Whitehouse was a laughingstock. There’s something about his personality that is incapable of knowing when people are laughing at him, not with him.

But Whitehouse is no joke. He’s a nasty piece of work who tried to intimidate the Supreme Court by threatening to restructure the court, something condemned by right and left, Republican Senators: Sheldon Whitehouse (D-RI) Brief “openly threatened” Supreme Court “with political retribution”

He’s a conspiracy nutter, and the focus of his conspiracy theories is the Federalist Society. He obsessed over it during the Kavanaugh hearings.

.@SenWhitehouse blasts the role of the Federalist Society in White House judicial selection during the Bush era and Trump era. Highlights right wing donors and how those donors connect to #DarkMoney money backing his current bid for the Supreme Court. pic.twitter.com/rhMi2MofGa

Watch Sen. Whitehouse pull out the receipts on just how much dark money is supporting Brett Kavanaugh pic.twitter.com/3LFKAfeYlN

“Neomi Rao is another judicial nominee from the Donald Trump/Federalist Society special interest machine.  Her ideology was birthed in the petri dish of the Republican corporate donor class that believes it is above government regulation and disdains accountability to juries and the judicial process.  She has led a campaign as Trump’s regulatory czar to deliver huge benefits to corporations at the expense of public protections that safeguard families, workers, and our environment.  The Roberts Court has already demonstrated its fealty to the donor class with its string of 73 partisan decisions in their favor.  I hope Ms. Rao does not fit this pattern; her record to date suggests she will.”

But all of Whitehouse’s conspiracy theories amount to nothing more than: Republican donors support conservative judicial nominations in compliance with the law. What he leaves out is that liberal donors do the same thing, maybe on a larger scale, funding groups like Demand Justice to attack Republican nominees. But Sheldon Whitehouse is shocked, just shocked, that Republicans do it.

That was on full display today during the hearings for Amy Coney Barrett. Whitehouse didn’t ask a single question of Barrett. Instead, he spent a half hour with charts and posters supposedly showing the grand conspiracy. But again, it amounted to nothing more than Republicans spend money to support conservative nominees — much if not almost all of the money being spent to counter attacks from left wing groups funded by unknown liberal donors.

Whitehouse: "This, more and more, looks like it's not three schemes — but it's one scheme. With the same funders selecting judges, funding campaigns for the judges, & then showing up in court in these orchestrated amicus flotillas to tell the judges what to do." pic.twitter.com/iBqVKAJQYn

Ted Cruz did a massive takedown of Whitehouse.

Senator Whitehouse opened up a can of worms. Senator Ted Cruz then spilled that can all over Whitehouse's head. pic.twitter.com/JJmQUAwREo

Not only is the dark money theory nonsense, it’s hypocritical. Whitehouse himself partakes of “dark money” donations:

As the Wall Street Journal noted in more than a half-dozen editorials, Whitehouse has long been a star in the dark-money puppet theater. Sometimes, he plays Geppetto, sometimes Pinocchio, but he’s a major player either way. The Journal has noted a whole series of friend-of-the-court briefs filed in Whitehouse’s name but which were funded, or for which legal work was done, by either top campaign donors or suspected top donors to Whitehouse. The same paper also raised questions, never fully answered, about a particular example of when “the senator intervened for a [specific] company after campaign cash flowed.”

Among the dark money outfits about which the Journal wanted Whitehouse to disclose his ties were ones called Arabella Advisors, the Sixteen Thirty Fund, and Demand Justice. A watchdog group called Influence Watch keeps close tabs on those left-wing outfits. It reports that Arabella is an umbrella group that doesn’t disclose its donors, nor do the subsidiary groups, and they also keep secret their “salaries, vendors, budgets, expense breakdown, fundraising, or grants to other nonprofits.” In 2018, it spent $600 million on political causes. The Sixteen Thirty Fund, in turn, was founded with seed money from the corrupt, now-defunct, left-wing organization ACORN.

"Where is all the money in this campaign cycle? Where is the finance community and big tech putting all their money? On the right…No. All of it's going to the left." pic.twitter.com/b66UoiNVQ6

This guy was hoping “boofing” was code for “gang-rape.” Complete idiot.

I’m going to go out on a limb and speculate that he’s a bit of a bed-wetter too.

Dark forces put that stain there!

It’s too horrible to really consider who is occupying the highest positions in our country.

All we have left is hope in PDJT.

Then then there’s this bastard:

Of course ACB is doing well in the hearings! As a mother of seven kids she has experience answering stupid questions from immature minds.*

* – shamelessly stolen from another web site 😉

I sentence him to death by stuffie. Which is not as sodomitic as it sounds.

“Why do you think I can tell you anything about dark money? It’s not like I’m running a Senate campaign or anything. I was nominated. It cost me nothing.”

He’s like members of The Squad, or Spartacus. He has his seat as long as he wants it.

And says all these nutzoid things while sitting on his head.
.

A friend observed that what was more disturbing than Whitehouse being such an idjit, was that the people of Rhode Island are apparently so uncaring that they would elect such an idjit.

It’s possible that as a mere Rubber Stamp Senator™, this idjit is less troublesome to the people of Rhode Island than if he had been less ambitious and was still their Attorney General.

That’s why after leaving RI in 1999, I would never go back. I love Narragansett Bay, Block Island, Colt State Park, the Great Swamp, the Norman Bird Sanctuary, and a dozen other places. But the people are small-minded wipers of other people’s bottoms, and the people they elect demonstrate the accuracy of my assessment.

I lived on Aquidneck Island most of my life. Left there in 2009 – for good. My wife and I realized that there was no hope for the place — like many “Blue” areas it’s in slow motion collapse. Somewhat like a combination of California in that it has natural beauty, and Cook County, Illinois in that it has a generations’ long history of tawdry corruption — and seems proud of it.

And brain dead voters — which is why you get the likes of Patrick Kennedy (when I was there); Sheldon Whitehouse; Jack Reed and David Ciccilline (a gay mob lawyer — no you can’t make this stuff up).

My wife and I agree that our only regret is that we didn’t leave decades sooner.

Ben Sasse cracked out a good line when, obviously referring to Whitehouse, commented to ACB about all the “Beautiful Mind” stuff being said. That was exactly what Whitehouse sounded like. Unfortunately for Whitehouse, he does not have any compensating genius like John Nash did.

That was than just a good line. It nailed the nature of the problem: brilliant construction of argument by a mad man. Whitehouse adorns his observations by linking strings of cultural references such as Billie Holliday’s “Strange Fruit” (which was about black lynchings) as if to persuade with intellect and sophistication rather than letting the facts speak for themselves.

The reason he is impervious to the fact that he is a laughing stock is that, like John Nash, he is a mad man. This is his reality. He has found his career obsession and is going to ride that hobby horse to the bitter end.

If the Dems are diversified in anything, it’s in their diversity of mental illnesses.

Don’t call others out for having their hand in the cookie jar when your is in there.

Don’t be too critical of Whitehouse. It’s like going to a standup comedy show with free tickets.
.

Whatever Sheldon Whitless is accusing the Republicans of doing you can bet the Dims are doing it 10 times worse. Cruz and Carlson just torched this guy yesterday, and he deserved ever bit of it.

This is interesting, but so what? The article clearly says that Clinton outraised Trump in 2016 and still lost. The blue state coastal elitists can put their money where they want. Where the electorate put their votes is what matters.
.

Sheldon Whitehouse is an azzhole just by getting out bed.

Nice job Rhode Island, your Senator is a fool.