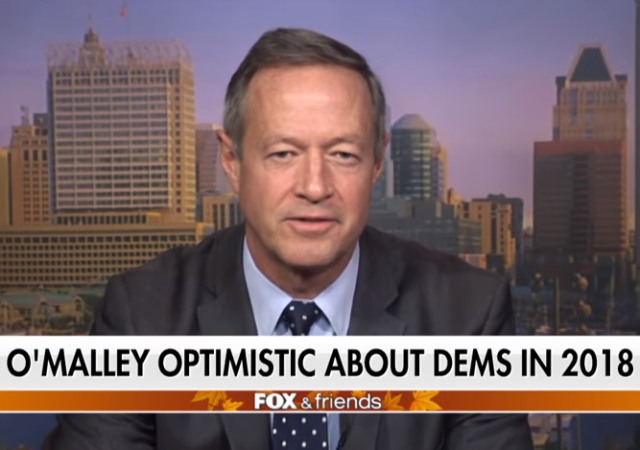 Posted by Mike LaChance on November 26, 2017 9 Comments
2016 Democrat also-ran Governor Martin O'Malley is feeling good about the Democratic Party's future. He thinks the party is coming back to life like a scorched landscape after a forest fire. It's not a bad analogy. He also lays some of the blame on Obama, which is correct.
Read More 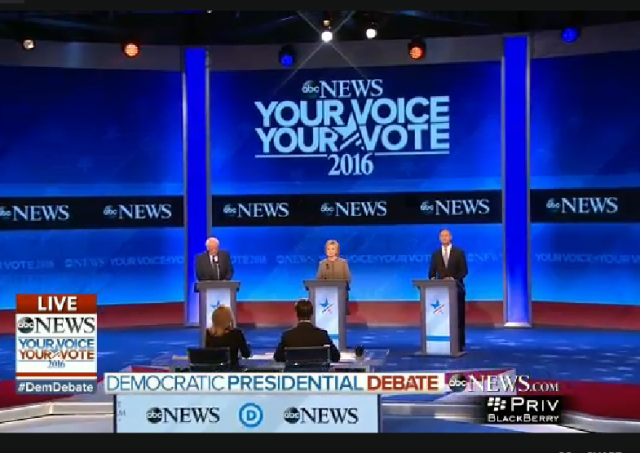 Posted by Kemberlee Kaye on January 17, 2016 11 Comments
Welcome to our live coverage of the NBC/YouTube Democratic presidential primary debate. 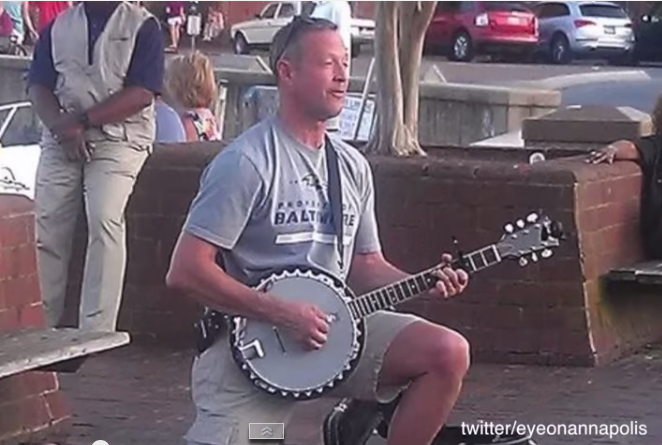 Posted by Fuzzy Slippers on January 01, 2016 10 Comments
In the wake of news that only one person showed up at a Martin O'Malley event in Iowa, news that he has failed to make the ballot in Ohio is probably unwelcome for the floundering campaign. The Hill reports:

Democratic presidential candidate Martin O'Malley failed to qualify for the ballot in Ohio. A spokesman for the Ohio secretary of state confirmed to The Hill on Thursday that O'Malley did not get the necessary 1,000 signatures to appear on the March 15 ballot. O'Malley's campaign submitted 1,175 signatures, but only 772 were found to be valid, according to the secretary's office. "While this news is disappointing, we are exploring all of our options," Haley Morris, a spokeswoman for O'Malley, said in a statement. Morris said that O'Malley will "campaign vigorously" in the Buckeye State and noted that he is on the ballot in 18 other states. O'Malley, a former Maryland governor, has failed to gain traction for his 2016 Democratic bid, placing well behind former secretary of State Hillary Clinton and Sen. Bernie Sanders (I-Vt.) in recent polls.

For his part, however, O'Malley is not giving up on his campaign just yet and has opened a new campaign HQ in Waterloo [insert obvious one-liners here].
Read More 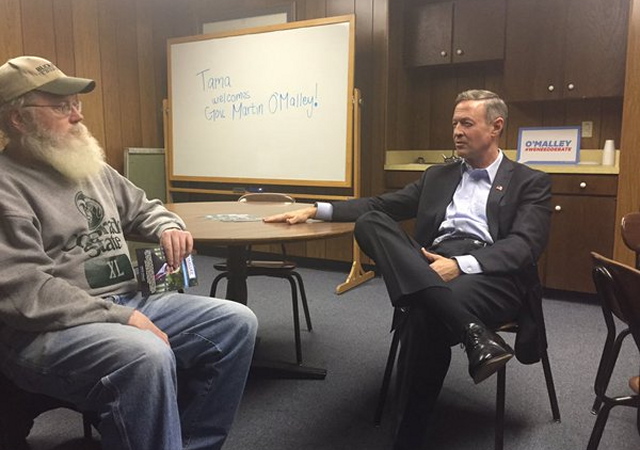 Posted by Mike LaChance on December 30, 2015 4 Comments
Democrat presidential candidate Martin O'Malley held a campaign event in Iowa Monday and one single person showed up. In O'Malley's defense, it was snowing in Iowa but still... one guy? Here's the worst part, the guy left uncommitted. Nick Gass reported at Politico:

One person shows up to O'Malley event in Iowa, remains uncommitted Amid a vicious winter storm on Monday that forced some presidential campaigns to cancel their scheduled stops in Iowa, only Martin O'Malley decided to press on. And one man at his last event, the only person to show up, in fact, "was glad to see me," the former Maryland governor said. But he still would not commit to caucus for O'Malley.

Posted by Amy Miller on September 10, 2015 12 Comments
Democrats are unhappy with the way their party officials are handling this election cycle---and the party doesn't mind one bit. Democratic National Committee Chair Debbie Wasserman Schultz has come under fire repeatedly for the way she's managing her flock of potential presidential candidates. In addition to sanctioning just six official debates, DWS has limited the potential for rogue forums by creating a new rule: if a Democrat chooses to participate in a non-sanctioned debate, they'll be banned from future sanctioned ones. During a media breakfast hosted by the Christian Science Monitor, she doubled down on the new rules:

“We’re not changing the process. We’re having six debates,” said Wasserman Schultz, who has been under fire from several Democratic presidential candidates over the debates. “The candidates will be uninvited from subsequent debates if they accept an invitation to anything outside of the six sanctioned debates.” 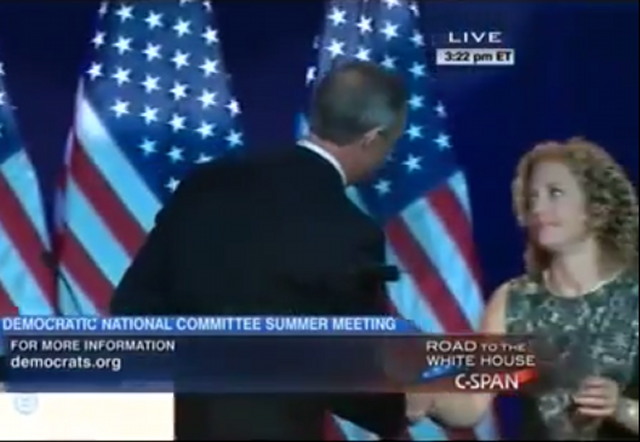 Posted by Mike LaChance on August 29, 2015 5 Comments
Martin O'Malley's complaints about the lack of Democratic debates are getting louder and it's beginning to put a strain on his party. DNC chair Debbie Wasserman Schultz was not happy about his speech at a recent event. Bradford Richardson of The Hill:

O’Malley challenges DNC over 'rigged' debate schedule Former Maryland Gov. Martin O’Malley thinks the Democratic Party’s decision to limit the number of primary debates is tantamount to rigging the nomination process. “Four debates and only four debates — we are told, not asked — before voters in our earliest states make their decision,” the presidential candidate said at the Democratic National Committee (DNC) Summer Meeting on Friday. “This sort of rigged process has never been attempted before,” he added. “One debate in Iowa. That’s it. One debate in New Hampshire. That’s all we can afford.” After O'Malley's speech wrapped up, observers noted palpable tension as he greeted DNC Chair, Rep. Debbie Wasserman Schultz.

Watch for the icy look she gives O'Malley in this video:
Read More 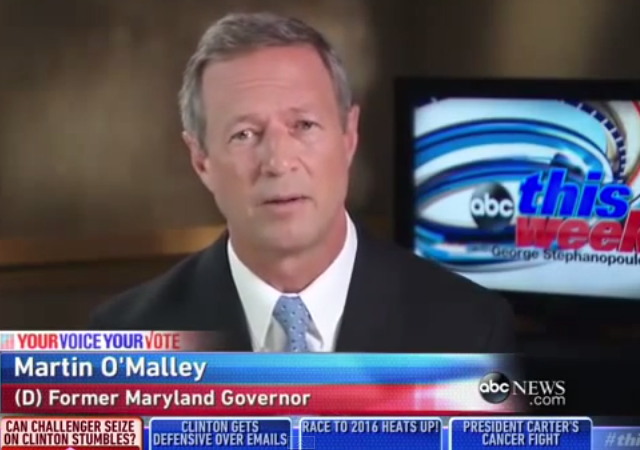 Posted by Mike LaChance on August 26, 2015 10 Comments
Martin O'Malley is angry at his own party for the lack of Democratic debates, and who could blame him? He's so starved for media attention that he's taken to bashing Donald Trump. O'Malley makes a valid point---what's the DNC so afraid of? David Sherfinski of the Washington Times reported:

Martin O’Malley rips DNC presidential debate schedule Former Maryland Gov. Martin O'Malley on Tuesday ripped the Democratic National Committee over its presidential debate schedule, saying Democrats aren’t going to stand for the “meddling” and “limiting of debate” the DNC is trying to pull. “There are people throughout Iowa and New Hampshire who are outraged that the Democratic party is trying to act in such an un-Democratic way,” Mr. O'Malley said on MSNBC’s “The Rundown with José Díaz-Balart.” “So I think you will see more debates. I plan to go to as many debates as I possible can.” Earlier this month, the DNC released a schedule of six presidential primary debates. The first, an Oct. 13 debate in Nevada, is followed by debates in the other early-voting states of Iowa, New Hampshire, and South Carolina. 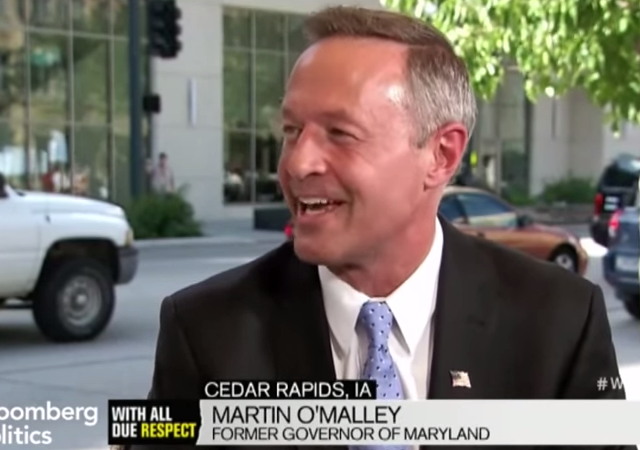 Posted by Mike LaChance on July 22, 2015 30 Comments
Mark Halperin of Bloomberg Politics recently interviewed 2016 Democratic Party presidential candidate Martin O'Malley. Their discussion covered a wide range of topics, but when talk turned to foreign policy, O'Malley suggested that climate change was behind the rise of ISIS. Transcript and video via Real Clear Politics:

Martin O'Malley: Climate Change Created ISIS MARTIN O'MALLEY: One of the things that preceded the failure of the nation state of Syria and the rise of ISIS, was the effect of climate change and the mega-drought that affected that nation, wiped out farmers, drove people to cities, created a humanitarian crisis that created the symptoms — or rather, the conditions — of extreme poverty that has now led to the rise of ISIS and this extreme violence.

The interview is approximately six minutes long. To hear the segment on ISIS and climate change, skip to the 3:40 mark:
Read More 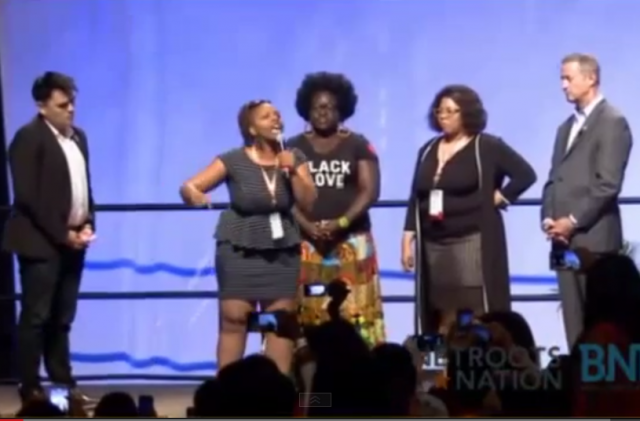 Posted by William A. Jacobson on July 18, 2015 28 Comments
One of the big secrets of the Democratic Party is the deep racial tension between the mostly white elite progressive leaders and activists "of color." We examined this in detail in 2011, Dem Base Fractures Into Twitter War And Charges Of Racism Against Professional Left. In that post, we documented the Twitter war between black activists and Joan Walsh of Salon.com and Jane Hamsher of Firedoglake: 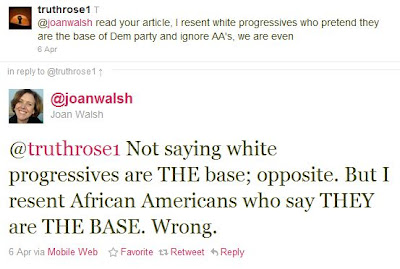 Those tensions have simmered for the past several years, and grown in the past year as the #BlackLivesMatters movement insisted that its voice was not being heard even within progressive circles.
Read More 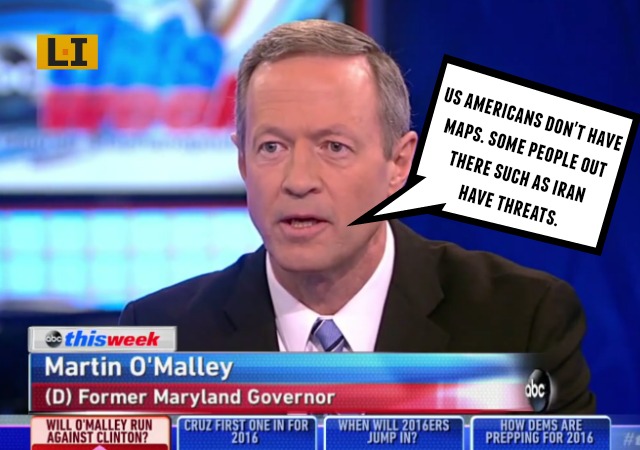 Is O’Malley the Democratic party’s next best hope?

Posted by Kemberlee Kaye on March 30, 2015 16 Comments
Hillary's email delete-o-rama and foreign funding issues aren't going away as quickly as the Clinton's had hoped. Left without anyone on the bench, the Democratic party is scrambling at the eleventh hour to cobble together a contingency plan. Then, out of (relative) obscurity emerged the most generic, milquetoast, cisgendered candidate conceivable -- former Maryland governor, Martin O'Malley. Yesterday, O'Malley sat down with George Stephanopolous. Platitude upon platitude, common sense this and common sense that, a quick jab at Hillary and an excruciating answer to an incredibly elementary foreign policy question, and that's what you get with O'Malley. Prior to his Perry-esque oops moment, O'Malley not so subtly upped his game by saying it's time for "new leadership and new perspective" when Stephanopolous mentioned the Governor's previous support of Mrs. Clinton. "Let's be honest here. The presidency of the United States is not a crown to be passed between two families." Zing! O'Malley struggled to name the single greatest national security threat to the United States. "The number one responsibility for the president is to protect the people of the United States of America. Would that there were only one threat. There are always threats," said O'Malley, obviously trying to buy himself some time. Stephanopolous persisted, and cringeworthiness reminiscent of Miss South Carolina's answer in the Miss Teen U.S.A. pageant, ensued. "The greatest danger that we face right now on a continuing basis in terms of man made threats is um... nuclear Iran and related to that, extremist violence. I don't think you can separate the two."
Read More 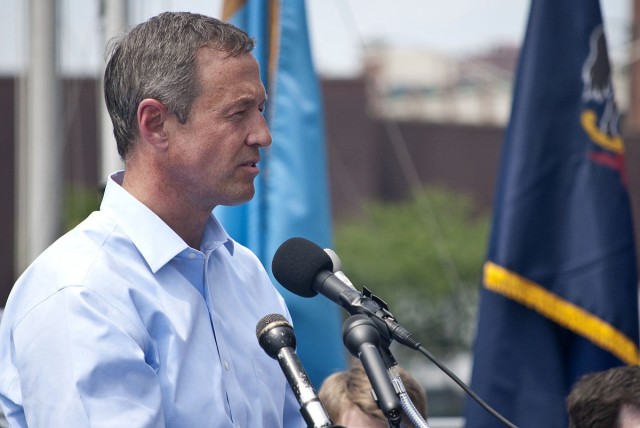 Posted by William A. Jacobson on March 01, 2015 20 Comments
Martin O'Mally [damn - I spelled his name wrong] (quick, look him up on Wikipedia, and let me know who he is) is spoken about in certain circles as a possible challenger to Billary. The New York Times reports that Marty (is it okay to call him that?) is jabbing at Billary, Martin O’Malley, in Veiled Jab at Hillary Clinton, Derides Politics of ‘Triangulation’:

Martin O’Malley, the former Maryland governor who is likely to seek the Democratic nomination for president in 2016, took a veiled shot at a potential rival, Hillary Rodham Clinton, in a speech in South Carolina on Saturday, criticizing the politics of “triangulation” that have historically been associated with the Clintons. “The most fundamental power of our party and our country is the power of our moral principles,” Mr. O’Malley said, according to a transcript of his remarks provided by an aide. In words that echoed those of Senator Barack Obama when he battled Mrs. Clinton in 2007 for the Democratic nomination, Mr. O’Malley added: “Triangulation is not a strategy that will move America forward. History celebrates profiles in courage, not profiles in convenience.” Mr. O’Malley’s comments came at the Democratic Party’s John Spratt Issues Conference in Myrtle Beach, and South Carolina is a crucial early primary state that Mrs. Clinton lost to Mr. Obama. Mr. O’Malley has in the past declined to contrast himself with Mrs. Clinton.... The remarks from Mr. O’Malley, who is viewed as facing an uphill battle, signaled a new phase both of his own efforts, after a year of saying he was not in “compare-contrast” mode with Mrs. Clinton, and of the early 2016 campaign.

He is My Governor, he wants to be Your President...