“One of the bullets was found 30 feet from where my daughters were doing their homework.” 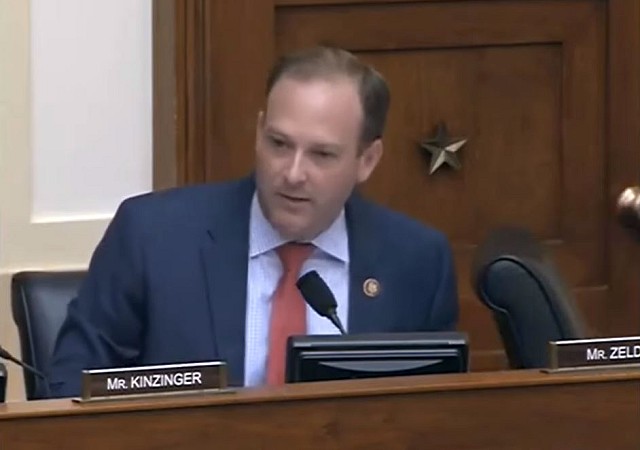 New York Rep. Lee Zeldin, the Republican gubernatorial candidate, said two people were shot outside his Long Island home as his daughters did their homework inside. From The New York Post:

“My daughters Mikayla and Arianna were doing homework on the first floor,” said Zeldin, who was not at the house in Shirley at the time. “They heard the shots. Boom! They went upstairs and locked themselves in the bathroom.

“They’re freaked out,” the congressman said of his 16-year-old girls. “One of the bullets was found 30 feet from where my daughters were doing their homework.”

The authorities classified “the shooting as gang-related and were still looking for the gunman or gunmen.”

A victim “jumped over the congressman’s fence trying to escape getting shot.” He knocked over a “Zeldin for Governor.” Another victim was shot in the chest. A bullet “grazed” another victim.

Sources told The New York Post the shooting had nothing to do with Zeldin.

On July 21, a man attacked Zeldin with a self-defense cat keychain at a campaign stop. The man supposedly told Zeldin, “You’re done.”

Zeldin is almost even with incumbent Democrat Gov. Kathy Hochul.

Zeldin opined about the violence and crime wreaking havoc in the area and New York City:

He said his front porch, where he had been interviewed by The Post just a day prior, “is now part of the crime scene.

“The local police have cordoned off the area,” he said.

A law enforcement source said there was blood all over the property.

“Crime is out of control,” Zeldin said in a statement. “Like so many New Yorkers, crime literally made its way to our front doorstep.

Zeldin said he and his wife, Diana, had just left the house to attend a Columbus Day Parade in the Morris Park neighborhood in The Bronx.

It just came out that the teenagers are part of a gang and are well known to police. They’d been hanging out at a recording studio that attracts gangs.

There are complaints that teaching classical music, even at places like Oberlin, is racist.

And, my reply to people who say things like that is “shut up”.

Fixed that for you.

I bet that recording studio is used for foul rap. In the seventies I built a recording studio for a black friend. That was back when blacks were producing some fine music. Singing was a natural talent for them. Black churches are worth attending for their singing, it is amazing.

*Maybe*. BUT given the shenanigans, and “politics by other means” we’ve seen, why do we believe the authoritah?

Just a gang thing. Not political. Nothing to see here. OK, history of gang actual violence in that neighborhood, on that block, involving that particular porch?

Second time this guy got touched by violence since he started getting political traction. Of course: “Get in their faces.” isn’t incitement. So, just some rando.

STOP MAKING THE CONSPIRACY NUTS LOOK RIGHT. TINFOIL HAT IS NOT A GOOD LOOK FOR ME; IT MAKES ME LOOK FAT.

It was a clear threat.

Wanna bet Hochul is a liar?

Anybody willing to take the other side of that bet?

You progressive fascists are amazing! You accuse your enemies, without any evidence, of lying when you ignore the proof that your Dear Leaders lie over and over.

Obama promised Ukraine that we would help defend them from Russia, but he did nothing when they attacked. Obama promised over and over that we would be able to keep our insurance if we wanted. At the same time he and Grubber were writing the regulations that forced insurance companies to break his promise. Finally, when his lie became obvious he had the gall to laugh and claim that we were too stupid to realize he was lying.

I lived in NYC and then the Hudson Valley for many years. I live in a red state now but in ten days I will be traveling to upstate New York to knock on doors for Zeldin.

Given that it happened on the doorstep of the Rep candidate for Governor there are many questions here that merely saying “gang-related” don’t answer.

Who exactly were they?
Why were they at that specific location?
Who shot them?
Why did they shoot them?
Etc.

Tie up his communications, mobility and resources. Hey it’s a crime scene.

Old game. Turns out once the issue was over, the investigation into Gaetz was quietly dropped. Of course what they were investigating — no charges — was luridly page one.

BTW, we been hearing much about Randy Andy lately?

Which gang? The Rat street Dems.

Democrats proving Zeldin’s point for him.

Oh, they do that. Not that it matters.

NY State voters are idiots. Or they’re interested in something other than what they say they are. The SAFE Act ain’t about SAFE — that’s the cover they use to slime anyone who questions their grab.

They put in stuff that doesn’t work as it sets up the excuse to do more.

/Same as it ever was.

Around / about stumping for The NYSAFE Act, one of The Hereditary Proconsul’s crew caught a stray from a gang exchange. RA goes to that neighborhood or like it on the regular — um, no. Other people have to live with the gun play their policies abet. I think the political operation just got lucky with a press event designed to catch gunfire on the audio. No harm. Staff’s bodies are in Randy Andy’s service, after all.

AIR, it turned out that the shooter was banned, the handgun banned, shooting or carrying in that area banned — trifecta of what those bannings are worth: less than nothing in keeping honest folk, or Cuomo Familia, from getting shot.

Now, here we are: gangs firefights on a Gov candidate’s porch.

Aaaaand, last week ROC’s Pravda on the Genesee reported a series of — um — assisted retirements, among two weed gang franchises. *After* “legalization” people would still rather do it on the D-L, including the cost of gun play. *After* “legalization”, illegal operation remains so lucrative that coastal gangs are fighting over the territory.

So how’s that SAFE act working out? How about the weed legalization? Gun free zones? (Enterprise zones, that Buffalo Billion — the one before the new stadium, etc.)

Meanwhile, their recent SAFE-II mandates signs on retailers *who permit customers to carry on premises.* I suppose that’ll help the goblins know who to trash during the next round of “mostly peaceful” protests.