Suspect in Attack on GOP NY Gubernatorial Candidate Rep. Lee Zeldin Released on His Own Recognizance

Suspect in Attack on GOP NY Gubernatorial Candidate Rep. Lee Zeldin Released on His Own Recognizance 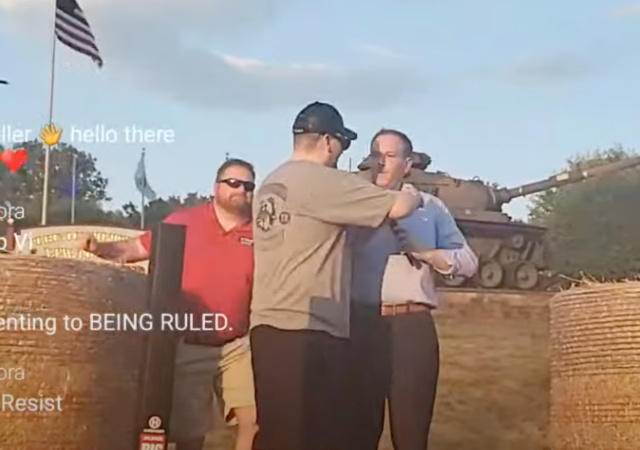 The attack took place in Fairport:

Zeldin was giving a campaign speech at the VFW on Macedon Center Road in Fairport when a man got on stage, started yelling, wrestled with the congressman and pulled out a sharp object, according to witnesses.

The Metropolitan Republican Club tweeted a picture purporting to show the object the man pulled, reportedly metal knuckles with knives shaped like cats ears. It can also be seen in a photo tweeted by Zeldin, who said the man told him, “You’re done.”

Zeldin’s campaign said the attacker was taken into custody and the congressman continued his speech.

The suspect, David G. Jakubonis, was released on his own recognizance after being charged with second-degree attempted assault, which is a felony. The Monroe County sheriff’s office wrote:

Perinton, NY (July 21, 2022) – On July 21, 2022 at approximately 8:00 p.m., Representative Lee Zeldin was on stage giving a campaign speech at the Veterans of Foreign Wars Post 8495 at 300 Macedon Center Road, in the Town of Perinton. A male from the crowd climbed up on the stage and approached Zeldin. The male had a weapon in his hand, swung it towards Zeldin’s neck, and told him, “You’re done.” Members of the audience and Rep. Zeldin’s campaign restrained the male until deputies arrived and took him into custody. There were no injuries. The suspect is identified as David G. Jakubonis, 43 y/o, of Fairport.

Jakubonis is charged with:
Attempted Assault in the Second Degree (E-Felony)

Jakubonis was arraigned in Perinton Town Court and released on his own recognizance.

Zeldin knew the release would happen.

His words as he tried to stab me a few hours ago were “you’re done”, but several attendees, including @EspositoforNY, quickly jumped into action & tackled the guy.

Law enforcement was on the scene within minutes.

The attacker will likely be instantly released under NY’s laws. pic.twitter.com/wZEyIyrjFe

Released on your own recognizance (ROR) means “a written promise signed by the defendant promising that they will show up for future court appearances and not engage in illegal activity while out on an ROR.”

Usually, a person can request a ROR for “non-violent and less-serious misdemeanor cases.”

Jakubonis is charged with a felony. Weird!

The Qualified Offenses include violent and serious crimes and felonies.

However, even if the crime falls under Qualified Offenses, you don’t automatically receive bail (emphasis theirs):

Despite the above Qualifying Offenses, if you are accused of one of these crimes and arraigned on a felony complaint or indictment, the court must nonetheless release you unless there is a specific and individualized analysis and conclusion that you are is a risk of flight to avoid prosecution. Assuming this determination is made, courts are required to adhere to the least restrictive guideline to ensuring the alleged offender – you – return to court. CPL 510.10(1). Keep in mind that if an offense is a qualified one for the purpose of bail or remand, a judge may, barring a provision preventing such, still set a non-monetary condition of release or release you on your own recognizance. CPL 510.10(4). Your criminal lawyer should aggressively pursue the same. Even where there is a financial requirement, ie., “monetary bail”, judges must examine your specific and individual financial circumstances and your ability to post bail without posing an undue hardship, as well your ability to obtain a secured, unsecured or partial secured bond. CPL 510.30(1)(f).

Plus, Jakubonis is charged with attempted assault in the second degree, which is an E-Felony:

A class E felony in New York is the lowest felony charge available and usually associated with serious crimes that did not warrant a higher felony charge. When, for example, a DWI or DUI case results in harm being done to a person or structure, a felony could be applied. In this instance it is usually a class E felony in New York. Class “E” felonies can also be theft, assault, forcible touching, or aggravated harassment. A class E felony NY sentence might be 2-5 years in jail, depending upon the circumstances of the case.

However, the charge is not considered a violent E-felony. But it still seems like a non-violent E-felony qualifies under Qualified Offenses since it’s still a felony.

Check out Kathy Hochul’s tweets calling out her dogs on Zeldin before the attack.

Meanwhile people were baited into walking into the Capitol and rot in horrible conditions.

Everything in the news these days hurtz to read it.

Republican candidates need to have armed guards protecting them against Democrats.

I believe I hear the feint sound of bugles in the distance as the politicians in NY sound an alarm. A politician being attacked who luckily tends off the armed assailant. Then the assailant being granted RoR….

That’s not quite what the political/establishment class had in mind with their bail reform mania. I expect that pure self interest may generate some adjustment to the bail reform laws. If not this could get out of hand.

It is already out of hand.

“a written promise signed by the defendant promising that they will show up for future court appearances and not engage in illegal activity while out on an ROR.”

Did they also get him to pinky swear?

From the perspective of d/prog politicians isn’t yet out of hand, after all this was a r political candidate being attacked. The future might bring other weirdos onto the scene who are less particular about which politicians they target….

I’m surprised they didn’t give him a gift certificate and a lifetime supply of mail in ballots.

They are happy when their enemies are attacked. They wish they could have joined in, but the conservatives would be problems for them.

Makes me wonder if the charges/bail would have been “adjusted” if Zeldin had been a Democrat?You know,a threat to our “democracy” and all that.

You wonder? Even Stevie Wonder wouldn’t wonder about that.

Zeldin is still a Member of Congress. Isn’t the assault of an MOC a federal crime? Where is the FBI?

Today’s FBI doesn’t care about stuff like that. They have school boards to police.

Republican Member of Congress so it doesn’t count as far as the FBI is considered. The FBI has been coopted by the Democrat party.

Well, if he had actually been successful he would have been given $50 bail.

Does anyone think this kind of thing will stop or even be resolved peacefully?

Clearly this is a rhetorical question but I’ll answer anyway.

No. No one thinks that.

Wow. Someone tries to kill a candidate for governor and he’s let out on bail within a couple hours?

Zeldin should run that as a commercial.

Oh and this attacker was terrible. If you’re going to be scum and do something like this you need to go all out. If he got any slower with those knuckles (it wasn’t a knife) Zeldin could have finished his speech.

Remember when the freak bum-rushed Dave Chapelle on stage a few months ago?

His crew beat the living shit out of that asshole.

When people pull shit like this, they need to be curb-stomped, viciously.

I bet if this happened to Biden the attacker would be dead. Why didn’t the congressman’s guard shoot before he got close?

Zeldin has poor skills. A weak side palm strike to the offenders jaw was in order. Remember folks: mindset, skillset, toolset. You need all three. A counter strike should have been instinct in that situation.

No, He was in the military and did the right thing by gripping the man’s wrist

Control of the wrist is the first step. The palm strike to the exposed jaw is the second and should have been delivered instantly. The dude was talking which means a good palm/heel strike to the lower jaw would have broken that jaw. I don’t know what he did in the military, but it was not hand fighting skills.

Above assumes Zeldin is right side dominant.

Also, that dude should have been wrecked being taken into custody. Like the guy who tried to stab Chappelle. His arm will never work properly again. Busting these idiots up when you have the chance is the only justice you are ever going to get.

“Suspect” and “Alleged”…. there are times when those words are so worthless as this was witnessed by so many.

The Left is now fully above the law as is common in dictatorships. The real criminal organization is the Democrat Party…

“Kitty knuckles” are illegal in New York, yet I don’t see any charges against him for illegal possession.

Wasn’t his stoke aimed at the juggler vein on his neck? That’s attempted murder.

Of course it was attempted murder, he even told Zeldin “You’re done!”

No, no, no. It was “attempted assault.” Not even “actual assault.” Because the Marxist DA says so.

He was a Democrat operative trying to kill a Republican candidate. As such, no laws apply to anything he does.

There are several charges that could have been applied here:

None of which was done. Either the arresting officers didn’t write these up or the local DA decided not to charge. Wonder why?

I remember this ANTIFA thug in Berkeley, CA who snuck up on conservatives and hit them on the head with a heavy u shaped bicycle lock. He pled guilty to a misdemeanor and got probation!

Even if criminal charges aren’t filed, couldn’t a civil suit be brought by Zeldin? Financially ruin the attacker. Take everything from him by civil suit. Garnish his wages for a decade. If he wants to run with the Dems, let him live in one of their tent cities near the freeway over pass.

The man put an edged weapon to another man’s throat. Given that, plus the foreknowledge that this dangerous nut would soon be free, they should have shot him.

One of the videos of this shows a woman (who I’m guessing is Zeldin’s running mate) hitting Mr. Jocobin hard several times while he is on the ground. The before and after shots show him quite “dishevlled” in the latter.

That would be Alison Esposito, Zeldin’s running mate, who just retired from the NYPD

“Attempted Assault in the Second Degree”

How is this merely ‘attempted’? The pictures clearly show him committing assault with a deadly weapon with the clear intent of causing serious injury. “You’re done”.

The fact that he didn’t manage to inflict much damage in the process doesn’t prevent it from being assault.

I hope there is a drop blood on it, but the Feds probably cleaned it up by now.

Attempted murder and release in no time on his own recognizance?

What better example of why Americans outht to be able to carry a gun; this guy should have been shot.