“These are the facts. On January 6th … a Capitol Police Officer [Brian Sicknick] was bludgeoned to death,” Rep. Mondaire Jones (D-N.Y.) said during a House Judiciary Committee meeting earlier this week. 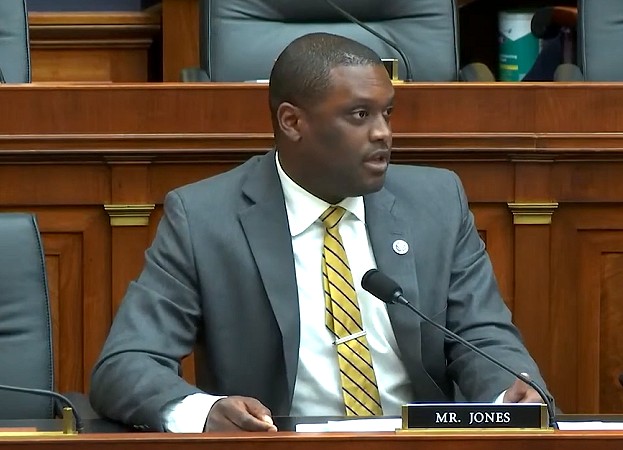 There are few things Democrats enjoy more than giving self-righteous speeches decrying the supposed awfulness of their political opposition and their opinions on the issues while at the same time feigning moral outrage whenever that opposition has the nerve to dispute their claims with actual facts.

Nearly this exact scenario played out during a House Judiciary Committee meeting earlier this week when Rep. Mondaire Jones (D-N.Y.) proceeded to give his highly embellished version of the so-called “facts” about the events of Jan. 6, 2021, stating a couple of key whoppers, one of which caught the attention of Rep. Dan Bishop (R-N.C.) who proceeded to question him with a brief assist by their colleague Rep. Chip Roy (R-Texas).

“These are the facts,” Jones stated early on in what he no doubt thought was his best serious voice before saying without evidence that former President Donald Trump “directed” his supporters to breach the Capitol building.

To date, no evidence whatsoever has been presented at any forum – not during the January 6th Committee show trials nor elsewhere – that Trump had anything whatsoever to do with the planning or orchestrating of the Capitol riot, must less “direct” those who attended his “Stop the Steal” rally to attack the Capitol.

But Jones saved his bigger whopper moments later when he told those on the committee that “a Capitol Police Officer [Brian Sicknick] was bludgeoned to death.”

Though he didn’t mention Sicknick’s name at the time, Bishop chimed in and asked him for clarification because no one was “bludgeoned to death” on Jan. 6th:

“Did you say a police officer was bludgeoned to death by the crowd at the Jan. 6 riots?” Bishop asked Jones.

Jones replied that he had in fact said “a police officer was bludgeoned to death,” but that he “did not say at the hands of who.”

“Who are you referring to, if you don’t mind saying?” Bishop pressed.

It was then that Jones knew he’d been caught in a lie, so he tried to switch gears.

“I can get that information for you in a few minutes,” Jones told him, to which Bishop said in response that “I just want to make sure…” before Jones cut him off in a bid to try to save face:

“Are you denying that at least one Capitol police officer was murdered in the midst of what happened on Jan. 6?” Jones shot back.

“Yeah, I think I am denying it,” Bishop replied. “I understood there were reports early on that Sicknick was struck with a fire extinguisher and that was subsequently debunked as false. He died of natural causes that were not connected to the event. Are we talking about the same person, Sicknick, or are we talking about somebody else?”

It was then Roy interjected to try and correctly point out that the Washington, D.C. chief medical examiner’s report stated that Sicknick died the next day of a stroke due to natural causes. Still, an obviously agitated Jones again interrupted, first by childishly throwing off the fact that both Roy and Bishop were attorneys and how Bishop allegedly “speaks often about how brilliant of an attorney he is” before launching into the use of legal terms to play word games over how Sicknick died:

“You know, we’re talking about ‘but for’ causation of Officer Sicknick’s death,” he said. “And so I would hope you would at least concede at a minimum that Mr. Sicknick died as a result of what happened on Jan. 6 and I’m disappointed if you suggest otherwise sir.”

But Bishop pressed on with the question about whether or not Jones and his colleagues believed Sicknick was “bludgeoned to death,” which irritated Jones, who disgustingly referred to Bishop’s pointing out that Sicknick did not get “bludgeoned to death” nor die during the Capitol riot as a “minute point” in the scheme of things:

“Look, I don’t think that’s correct either but was he bludgeoned to death?” Bishop went on.

“My understanding is that was debunked and Mr. Roy just read the medical examiner’s information. Do you guys contend he was bludgeoned to death?”

“I contend that 138 Capitol and DC police officers were injured and that multiple Capitol police officers died as a direct result of what happened on Jan. 6 and I hope that you… I hope you see how one would question the sincerity of such a minute point in the midst of the gravity of everything else,” Jones asserted.

Watch the full exchange below:

This was embarrassing, and if Jones had any shame whatsoever, he’d apologize and concede the point.

But like other Democrats, including House Speaker Nancy Pelosi up to President Joe Biden, the false narratives they’ve repeatedly painted about who died that day must carry on because in the absence of having “smoking gun”-type evidence on Trump, the next best thing they think they have is to falsely accuse the Trump supporters who stormed the Capitol of “murder” as a way to smear the near-75 million people who voted for Donald Trump in 2020.

As for Jones, well, not only did Bishop shut him down during the Committee meeting, but New York Democrats in the newly-drawn 10th Congressional District shut him down last month by making Daniel Goldman the primary winner in a crowded field. So clearly, Jones is lashing out on his way out the door, perhaps hoping his next assignment will be hosting his own show alongside the rest of the woke leftists at MSNBC.

Frustrating. How much more of an opportunity do you need? Stop being polite and just make them famous by nailing them when they repeat their lies.

Yes put a dagger in it

Thankfully his last day in Congress will be Jan-2-2023. His district was redrawn out from under him, so he tried to run for my district. He might have succeeded, but the “Progressive” vote was split between him and another equally-woke candidate, so Dan Goldman, the Schumer machine candidate, and relative to the other two a “moderate”, prevailed. I couldn’t bring myself to vote for him, preferring to waste my vote on a DINO by the name of Brian Robinson, but of the realistic choices Goldman was probably the least bad. If we had ranked choice in this primary I would have put him second.

When a person or organization can say or do nearly anything without fear of criticism or even questions, truth and trust suffer greatly. The US media, a wholly owned subsidiary of the Democrat Party, along with Social Media outlets lean so far left as to almost fall over.

What’s that old saying about repeating a lie often enough and it will be taken for the truth?

That Congressional Black Caucus is a real powerhouse of intellect, huh?

The charges of white privilege and systemic racism that are tearing the country apart float free of reality. Two known facts, long since documented beyond reasonable doubt, need to be brought into the open and incorporated into the way we think about public policy: American whites, blacks, Hispanics, and Asians have different violent crime rates and different means and distributions of cognitive ability. The allegations of racism in policing, college admissions, segregation in housing, and hiring and promotions in the workplace ignore the ways in which the problems that prompt the allegations of systemic racism are driven by these two realities.

What good can come of bringing them into the open? America’s most precious ideal is what used to be known as the American Creed: People are not to be judged by where they came from, what social class they come from, or by race, color, or creed. They must be judged as individuals. The prevailing Progressive ideology repudiates that ideal, demanding instead that the state should judge people by their race, social origins, religion, sex, and sexual orientation.

Seems to me that Bishop was trying to ascertain whether Rep. Jones was ignorant of the fact that the only people who died violently during the J-6 protest were two women who posed no serious threat to anybody who were killed by the Capitol Police, or whether he was just willfully flat-ass lying.

“Listen, I’m a politician, which means I’m a cheat and a liar, and when I’m not kissing babies, I’m stealing their lollipops.” –Jeffrey Pelt — The Hunt For Red October

Modaire? Wasn’t that a failed Chevrolet model from the 1960s?

No. It was a highly successful singing group associated with the Glen Miller band.

It’s “Mondaire,” not “Modaire.” It was a 1970s Jamaican refrigerator company.

Four people died during the 1/6 riot: An unarmed woman climbing through a window was shot without any warning or attempt to subdue her by crowd control measures, another unarmed woman was caught on video being beaten on the ground by DC police, and two unarmed men had heart attacks. All went through the DC Medical Examiner office for autopsies, and were promptly cremated despite the wishes of their families. From what I understand, both of the heart attack victims were also hit by flash-bang grenades thrown by the Capitol police, but the ME seems to have left out any record of the woman’s beating or the men’s concussion injuries, and of course they’ve been cremated, so any questions are just conspiracy theories. Right?

A typically mendacious Dumb-o-crat fabulist. Facts must be ignored and subordinated to the Dumb-o-crat Narrative (TM).

“… that multiple Capitol police officers died as a direct result of what happened on Jan. 6…”

And the poor bastards were both pregnant, too. Try to keep up.

Julie Kelly wrote many congressman on the Left said police were killed on Jan 6.
Only 2 people were murdered on Jan 6 at the Capital
Ashli Babbitt
Roseanne Boyland

“This was embarrassing, and if Jones had any shame whatsoever, he’d apologize and concede the point.”

Hearing an apology from a Democrat is one of the things on my bucket list.
But I’m still waiting for a seat to open on my local parole board.

They’ll never apologize. They’ll never admit they were wrong. Their clapping seals will never abandon their handlers, no matter how wrong, how often.

They aren’t selling truth, understanding, or effectiveness. They’re selling the frisson of “better than those people” to people with little reason to feel good about themselves on their own account.

You can take away their payoff by confronting them on their nonsense. While you’ll never convince their true believers, you can enlighten folks who are looking to get something done. And you can make the operatives and apparatchiks change their calculations. Maybe going along isn’t free.