“A mob of insurrectionists stormed the Capitol, the very citadel of democracy.” 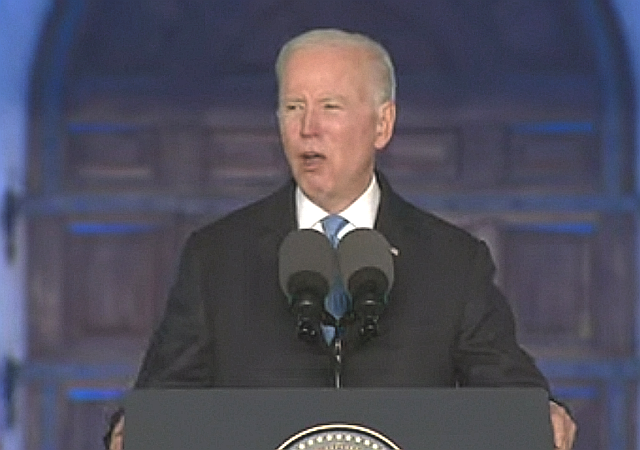 Joe Biden just lies and lies, and the media doesn’t even challenge him.

The president spoke about the January 6th protests during his commencement speech at the University of Delaware.

A mob of insurrectionists stormed the Capitol, the very citadel of democracy. Imagine what you’d be thinking today if you had heard this morning before you got here that a group of a thousand people broke down the doors of the parliament of Great Britain, killed two police officers, smashed and ransacked the office of members of the British Parliament or any other, what would you think? What would you think?

The old man is really pushing hard for trouble.

The pResident (or the people pulling his strings) have been pushing for a revolution (Civil War II) ever since his inauguration.

They are not the brightest bulbs, if they were they would realise that cconsertatives are generally betrter armed and more proficient with weapons and that while a civil war would be awful for all concerned, it will be worse for them.

Um they have more firepower than us if the government stays intact.

A lot of good that did for our forces in Afghanistan, or for the British during the Revolutionary War.

Even excluding his dementia, Biden is a pathological liar. He is incapable of telling the truth about anything.

Well … Trump was incapable of telling the truth about anything as well. Just sayin’ …

Her is some truth for you, Biden is a hollow shell of his fprmer crookedness, now just a puppet. His legacy are a crooked wife and five children, which includes at least two crooked sons. The family is the Biden Syndicate.

Trump’s mistake was not realizing how bad the swamp is. Today he is much better informed about the scope of the problem. Biden’s and Clinton’s personify just how bad the problem is.

It goes with that insipid crooked smile.

Is it just me, or does Biden always look like he is getting an onstage enema?

That’s not a response to PODken’s completely correct point. Biden and Trump are both congenital liars, just like Hillary Clinton.

I was personally told that you have a micropenis, and I’m betting it’s true.

Actually, any exaggeration or mild mistake was counted as a “lie” by our proud Fifth Columnist press and most of the things he said came true with the selection of Biden.

Yes, the “lie counter” thing was carried to a ridiculous extent. But it remains the case that Trump has absolutely no sense of the distinction between truth and lies, and says whatever suits him at any moment with no regard at all for whether it happens to be true. Just like Biden, and just like Clinton.

“Even excluding his dementia, Biden is a pathological liar.”

Yeah, but put them together and you have a real firecracker.