Democrats and the media need for the Capitol riot to look worse than it actually was because of narratives and whatnot. 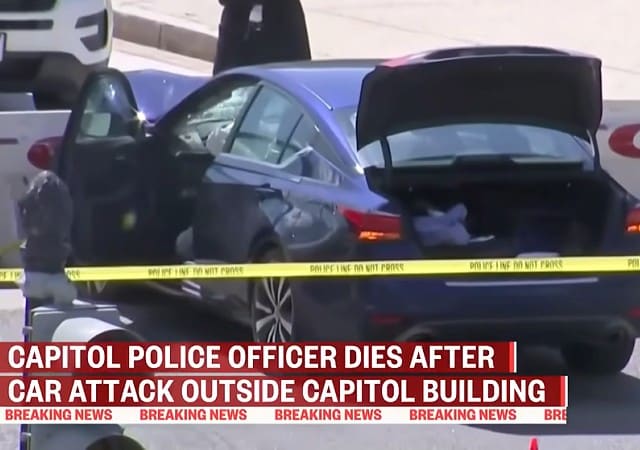 One of the most persistently infuriating things about the media’s coverage and the left’s commentary about the January 6, 2021 Capitol riot is their repeated references to how “numerous people died” during the attack.

For instance, there was this October 24, 2021 tweet from Rep. Alexandria Ocasio-Cortez, who falsely claimed there were “almost 10 dead” from the “terrorist attack”:

Any member of Congress who helped plot a terrorist attack on our nation’s capitol must be expelled.

This was a terror attack. 138 injured, almost 10 dead. Those responsible remain a danger to our democracy, our country, and human life in the vicinity of our Capitol and beyond. https://t.co/D0qLlaFjTh

In reality, there was only one death that day related to the actual violence: 35-year-old Ashli Babbitt, an Air Force veteran and Trump supporter who was killed by Capitol Police officer Lt. Michael Byrd as she tried to climb through a glass-paneled door after parts of it had been shattered by an alleged rioter identified as Zachary Jordan Alam.

The three other deaths that day were Trump supporters Kevin Greeson, 55, and Benjamin Phillips, 50, who per the D.C. medical examiner died from natural causes (heart attacks). Roseanne Boyland, 34, died from a drug overdose. Capitol Police Officer Brian Sicknick died the next day, and per the medical examiner, Sicknick “suffered two strokes and died of natural causes.”

In the days and months after the Capitol breach, four police officers committed suicide. That’s how AOC and other Democrats, as well as members of the mainstream media, have come up with their “Capitol riot death toll.”

But on Thursday, the one-year anniversary of the Capitol riot, a number of Democrats including President Joe Biden, House Speaker Nancy Pelosi, and Ohio Rep. Tim Ryan (who is running for Senate) wrongly added another death to the list: Capitol Police Officer Billy Evans.

Evans was murdered in a deliberate vehicular attack on April 2, 2021 by Noah Green, self-proclaimed black nationalist and follower of the Nation of Islam. Another officer was injured in the attack but fortunately that officer survived.

Here’s what Biden said during his Thursday speech about Sicknick and Evans. Note the wording, which gives listeners and viewers the impression that Evans was killed during the Capitol riot:

We must never forget the officers we lost on January 6 or in the aftermath that followed. They made the ultimate sacrifice in defense of our democracy. pic.twitter.com/NUeBvTx7nv

Here’s what Pelosi said on the floor of the U.S. House. Note how she wrongly suggested that the officers she mentioned during her speech died “that day” and her wording on how Evans died “of a later assault.” Pelosi gives no details on the assault that took Evans’s life, purposely giving off the impression that it was related to the Capitol riot:

Ryan did similarly, except he included the names of two other Met Police police officers who committed suicide (Gunther Hashida and Kyle DeFreytag):

As we remember the events of one year ago today, let us pause to pray for those who lost their lives in the days and weeks after January 6th.

Massachusetts Gov. Charlie Baker, one of those rare Republicans who managed to get elected at a statewide level in a deep blue state, joined in on the action by falsely proclaiming Evans, a native of North Adams, MA, “lost his life that day”:

Read my full statement on today’s somber anniversary below: pic.twitter.com/814oVs1Fn5

Instead of deleting his tweet after being called out on his falsehood, Baker later posted an updated one that still invoked Evans’s name as it related to the Capitol riot, saying he was one of the officers who “lost his life in protecting the Capitol last year,” which still gives the impression that he was killed during the Capitol riot:

It’s bad enough that these politicians (and reporters) keep lying about what happened on January 6th, 2021, but it’s even worse when they add a man to the list whose death—while tragic—was completely unconnected to the Capitol riot in any way.

All of this is, of course, deliberate, because Democrats and the media need for the Capitol riot to look worse than it actually was because of narratives and whatnot.

If your position / argument is strong, you do not need to lie….

“It’s bad enough that these politicians (and reporters) keep lying about what happened on January 6th,”

But all they ever have are lies, so what else do you expect them to do?

That’s one story. Here’s another:

[January 6 detainee Jacob] Lang says he was saving lives from police brutality. He said he attempted to pull the body of Rosanne Boyland out of a Capitol tunnel after “police beat her on the ground and pushed a massive swarm of people on top of her.” Boyland died that day.

Another man present that day, Phillip Anderson, filed an affidavit with the court saying that Lang saved his life. Anderson said police were using “excessive force” against him and he could not breathe. He said he heard Lang warning the crowd, including officers, that people were being crushed. “Jake proceeded to save my life by pulling me out of the pile of people. If Jake was not present to help me, I would have died on January 6, 2021, and it would have been because of the actions that the police took,” Anderson, who is black, wrote.

“This story could actually be the opposite of kneeling on George Floyd,” [Lang] said. “An unarmed black man [Anderson] almost died at the hands of police brutality on the steps of the Capitol and he was saved by a white Jewish Trump supporter. Where’s that headline?”

Under reporting protestor deaths and reporting fictional police officer deaths.
Change the facts to fit the narrative and the Media all fall in line.

Because they know they can get away with it.

Most of the GOP never aggressively and persistently challenges the propaganda and lies when the target is Trump. Because they hate and fear Trump, and his supporters, as much as the Dems do.

One woman aborted with prejudice. Another suffered progressive viability when the Capitol Hill/MPDC attacked the people and forced a riot (disorder). Pelosi, Ryan, Biden, Cortez et al spun a handmade tale and Capitol Hill officers may have self-aborted to calm the cognitive dissonance.

Rather than wring hands and clutch our pearls about the outrageousness of it all, bust ’em instead.

“… but it’s even worse when they add a man to the list whose death—while tragic—was completely unconnected to the Capitol riot in any way.”

And was aimed at Pres. Trump by allies of BLM and Antifa.

A further examination revealed that all of these people died of covid.

And he blows a mean cornucopia!

For the left, it’s always all about the numbers that how you instill panic. It doesn’t matter if you fudge them or not. Not like the Kool-Aid crowd will question them.

The ones that are smart enough to notice will delight and participate in the deceit because they can get away with it.

I rather enjoyed the memorial ceremony, where AOL laid a wreath on her own grave.

AOC was beside herself with anger for her unjustified murder.