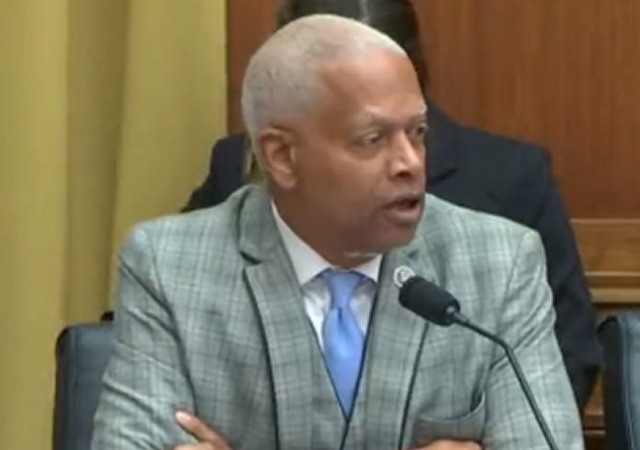 Rep. Hank Johnson (D-GA) compared parents speaking at school board meetings to January 6th this week. You may remember Johnson as the moron who thought the island of Guam might tip over if there were too many people standing on it.

I sincerely hope Johnson and other Democrats keep talking like this. Nothing will red-pill parents faster than this.

Georgia Democrat Rep. Hank Johnson claimed “MAGA Republicans” descended on school board meetings in a similar manner to the Jan. 6 Capitol riot during a committee hearing.

On Wednesday, the House Committee of the Judiciary met to discuss H. Res. 1238 which requested President Biden “provide certain documents to the House of Representatives relating to the October 4, 2021 memorandum issued by the Attorney General entitled Partnership Among Federal, State, Local, Tribal, and Territorial Law Enforcement to Address Threats Against School Administrators, Board Members, Teachers, and Staff.”…

“January 6, 2021, will never be forgotten, an infamous day in American history. MAGA Republicans descended upon the Capitol, engaged in an insurrection. They occupied the Capitol. Five people were killed, hundreds injured, including hundreds of Capitol Hill police officers attacked and bludgeoned. It was a day that we’ll never forget,” the lawmaker said. “And people on the local level at affected school board meetings they won’t forget the MAGA Republicans descending on their school board meetings after January 6, like January 6, disrupting meetings. It was a coordinated attack happening across the country. Americans won’t forget about it. School board members, teachers, administrators, subjected to violence, threats of violence, harassment, intimidation.”

He also denied any connections between the federal government and the NSBA in condemning parents protesting against school board members.

“And in response to that, the National School Boards Association sent a letter to the Biden Administration seeking federal help. Things had gotten so far out of hand. And by the way, there is not one scintilla of evidence, either direct or indirect, that there was any coordination between the Biden Administration and the National School Boards Association that caused that letter to be sent seeking federal assistance,” Johnson said.

Johnson is absolutely lying about what happened with the National School Boards Association.

Like I said, this will red-pill a lot of parents.

This is the exact opposite way of restoring parents’ trust. https://t.co/a039gUUCmx

Here are Johnson’s infamous comments about Guam tipping over.

At what point will a democrat unironically start quoting Mao Zedong? Or propose a final solution to the conservative question?

My guess is they do it in private conversations all of the time.

Idiot Johnson bloviates about “a coordinated attack?” Wait, like the coordinated attacks and predations visited by the vile Dumb-o-crats’ goose-stepping, brownshirted, terrorist-insurrectionist thugs in “Anti-fa” and “Black Lives Matter upon the U.S., when they spent the bulk of year 2020 destroying neighborhoods and businesses, occupying cities, attacking law enforcement officers, murdering innocents and desecrating synagogues — all with the overt support, encouragement and enabling of Dumb-o-crat leadership?

Sorry that was suppose to be an up vote

When teachers don’t teach kids that “tornado” is NOT spelled “Tornato” we have a problem.
Aiken 1 school district…right by the bomb plant.
https://youtu.be/tSyTX6fjwjY

I would liken him to something but I can’t post it here.

The 1/6 protesters were mostly peaceful demonstrators. They weren’t armed, didn’t kill anyone, didn’t start any fires, throw pallets of bricks. ANTIFA and BLM killed dozens of people, had placed pallets of bricks that they threw at police and destroy $7 billion worth of property mostly b you arson. Yet the progressive fascists are persecuting the 1/6 protesters and protecting the Brownshirts, BLM and ANTIFA.

Well, duh. I quoted the headline and then expressed my disgust with Hank Johnson for saying it.

Yes Dims, please keep shouting this message from the rooftops for at least the next 7 weeks or so.

But dang, SMH, the stupidity. People actually vote for this guy?

He mirrors his constituency ….which is sad but true.

Before him, they voted for Cynthia McKinney.

The man is a fool. His words remove any doubt.
.

Plus (and the photo is proof!) his mother dresses him funny.

Laugh all you want at Hank Johnson. He deserves the ridicule.

That’s not the reason the alarm bells are going off. Rather, he’s a reflection of the voters who sent him to DC.

Summation of most of our problems: TOO MUCH GOVERNMENT.

How many of his voters even know what he says. If he has a quota district, his voters vote black. Not content.

How very accurately racist of you to note their racism!

Keep in mind that this moron was worried about Guam capsizing if we put too many people on the island. I don’t think his opinion of anything is worth a squirt of spit.

How sick and depraved are the voters in his district?

Remember, he was considered strongly preferable to Cynthia McKinney, the notorious black Jew-hater, that he ousted.

Yes, a riot forced by a congressional denial of security, a rug extended and summarily pulled, an unarmed women aborted in a prone position, and probable Whitmer event.

I liken Johnson and his fellow travelers to Bolsheviks trying to silence, persecute, arrest, prosecute, and imprison wrongthinking ‘counter revolutionaries’.

The parents that spoke up were angry about crimes committed against their children. There was even a rape covered up, not to mention nasty, racist teaching, child abuse with masks, and sexual grooming. Those parents had a responsibility to take action, and the ugly way they were treated would provoke anger in any self-respecting person.

One of the dumbest men on the planet.

There is no future but Idiocracy, and Mike Judge is its prophet.

I am very curious on what enrollment numbers will be this year in Wa.

EVERY alternative option to public school in our area is both FULL and waitlisted.

Media so far is “uninterested” and blaming COVID.

Virtually every new mom my wife talks to in these programs is that was the BLM and gender garbage that drove them out. In Wa the gender stuff was over the top for Pride month in June so those numbers haven’t landed yet.

Wait for it- it will.

They’re both trying to save the republic.

Not even close to t his dumbest comment. Ask Him about Guam.

“The Johnson” really believes in what he is saying, so someone is feeding him this crap and he is just a parrot

“The Johnson” is lying though his teeth.

Either way, he is a “Johnson” and an idiot. Glad to see government welfare works.

It’s not about damage, decorum, or danger: it’s about the proles acting up disturbing the overlords.

“It ain’t the same” is literally true, to them. Damage to the livestock — us — is just a cost of doing some particular righteous business. Our Betters(tm) ignore a couple years’ cities in flames, then react to a guy in buffalo horns with indefinite detentions, country-wide investigations beholden to the legislature not the law, thousands of military investing the capital for a few months, and Star Chambers on TV — the series.

It’s who’s ox is gored. People in govt long ago abandoned being our agents in governing ourselves for our own advantage; they are ruling us for theirs. They get testy when any of we ruled have an opinion. Who do we think we are?

What we have here, in Mr. Hank Johnson, is an everyday run-of-the-mill goddamned genius.

If too many parents go to a school board meeting, the school could capsize resulting injury or loss of life.

Is Hank invested in the Companies that sell CRT to schools??

Judging by the way they are trying to hang “MAGA Republicans” around regular people’s necks, we should have an analogous response.

How about Communist Democrats? I know it sounds redundant, but sometimes, you have to reinforce the idea.

Hank you put enough of those parents protesting at school board meetings on Guam and by jingus! Guam is likely to capsize and tip right over. Good thing you warned us about that in the past.