These mayors think their cities have it bad. Imagine what the small border towns deal with on a daily basis. 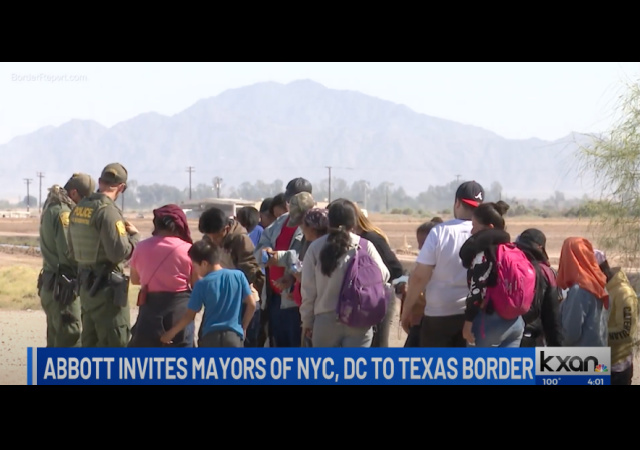 Abbott welcomed Adams and Bowser’s “recent interest” in the border crisis since the Biden administration has shown no interest in solving the problem.

“As Governor, I invite you to visit our border region to see firsthand the dire situation that only grows more urgent with each passing day, and to meet with the local officials, who like yourselves, realize this matter deserves immediate federal action,” wrote Abbott. “I also ask you to join me in requesting President Biden secure the border and put an end to this disastrous crisis.”

Both mayors have complained about the numerous illegal immigrants arriving in their cities.

Abbott and Arizona Gov. Doug Ducey bus illegal immigrants to DC because Bowser made it a sanctuary state.

Adams tried to blame Abbott and Ducey, but the feds have a habit of sending illegal immigrants to New York state in the middle of the night. The governors only bus the illegals to DC.

Bowser used strong language against Abbott and Ducey when she asked for help from the National Guard. She opined about the “humanitarian crisis” in DC while slamming the “abhorrent operations” from Texas and Arizona.

Abbott set the record straight with Adams and Bowser, including a reminder that he has tried many times to get help from the federal government:

“Unfortunately, President Biden and his ‘Border Czar’ Vice President Harris have refused to see this crisis for themselves—remaining willfully ignorant of the crisis that they have created,” continued Abbott.

America only saw 389,000 gotaways all of the 2021 Fiscal Year. Gotaways are illegal immigrants people see crossing the border but are never caught.

Illegal immigrant gotaways have already hit more than half a million in 2022 fiscal year, which ends on October 1.

I see two black mayors complaining about hispanics. Is that racist? Were they just giving virtue signaling lip service to the idea of sanctuary cities?

I doubt race has anything to do with it. I think they honestly had no idea what is going on in border towns, because they never cared to inform themselves. So they thought all the talk of a “crisis” at the border was just a Republican talking point, until they got a tiny taste of it themselves. And they still don’t get it. They don’t understand that what they’re getting is a tiny fraction of the real problem, because it’s only those who volunteer to get on a bus, and there are only so many buses. Maybe if they went and spoke to the mayors of a few border towns, they might become better informed; even if it didn’t change their positions or policies, at least they’d know what it was they were talking about. They’d be lying rather than ignorant.

Given the current state of competitive victim hood, and history I would not be surprised. In Lost Angeles – black vs Hispanic violence for control of neighborhoods is a real bloody thing.

They’re unprincipled and corrupt, not stupid. Never assume they’re stupid. They know exactly what the impact of unchecked illegal crossing is, they just expected to be protected from it by Uncle Joe, who’s using it to punish conservative states and communities. Kudos to Abbot for his marvelous solution to spread the pain to those who are inflicting it.

Of course it is. Especially if you backtrack a few years and see where President DJT was labelled as a racist because he wanted to build a wall and get control of the border. There is no difference for these current hypocrites. Except that DJT was enforcing US law and these mayors are actively pushing policies that are contra to US law.

They will continue to complain. It takes a pretty decent person to learn that they were on the wrong side, and after getting additional information on the subject, choose to change their tune. It may even involve some introspection and apologizing. I don’t see these mayors doing that. They have based their whole political career on a flawed political theme and no amount of factual information will cause a change, they are wedded to a flawed ideology and they are determined to continue to “dance with the guy who brung ’em” even if it means going down with the ship.

IMO, both should seriously consider this. It would immediately set them apart from the other d/prog simply by going. If they then condemned the scale of the impact on border communities and called for federal assistance to these communities in addition to all other communities that would be huge.

They don’t have to take an close the border position, just focusing on the impacts of large numbers of additional people on scarce public resources. That could potentially position them for higher office as if not a ‘maverick’ then as thoughtful, independent thinkers on this issue.

Bowser has zero interest in being apart from the prog machine, and Adams doesn’t look to be better since taking office.

The thing about machine politics is one has to wait their turn to be considered for selection by the party bosses. Taking an independent position that basically says ‘the Feds need to send per person funding to impacted communities whether at the border or in the interior due to increased costs and strain on public resources and services’ wouldn’t be controversial.

They could still keep the whole ‘nation of immigrants’ and ‘diversity is our strength’ shtick. What d/prog doesn’t like handing out other people’s money? Heck many r like riding the federal taxpayer gravy train; ‘my service on the Armed Services Cmte got our local base additional personal and the local defense contractor more orders’.

DC because Bowser made it a sanctuary state
I realize it’s shorthand, but Washington DC is not a state. It is a federal district and a city.

And I fully back sending the illegal aliens all to where the DC denizens live. But let’s put a big wall around that spot, first. Think Escape From New York….

If you have to ask, you can’t afford it.

Isn’t the whole state of California a sanctuary for illegal aliens? Send them to California too…. And any other illegal sanctuary. They want them, let them have illegals.

Why? This was much more effective at making the point. Californians seem to have a resistance to caring whether or not their once great state turns into a 3rd world shithole.

Why bus illegals to California when California is growing their own supply faster than you possibly could?

Most of our illegals arrive by bus, plane and boat. We should send them all back to their home states and countries.

New Jersey is a sanctuary state too. I live here, and I think they should be sent here too. Let the governor deal with what he caused.

“Texas has spent over $3 billion in the past 18 months to curtail the devastation felt by our communities large and small,” says Abbott.

We flush about $2 billion down the toilet every year on medical, education and jails for illegals here in Texas. But what they pay in taxes, their low labor cost, and fealty to the government, is why our elites will ever care. The people in charge benefit way too much to stop it.

It’s not about cheap labor for the leftists, it’s about future votes. Just keep in mind that California once produced Ronald Reagan. You think they would vote for him today? Since the left objects to the term “illegal alien” I’ll start calling them “unregistered Democrats”.

It’s about creating a new voting block, for when they manage to c=grant them all amnesty and the federal vote.

I can’t figure out what “temn” is a typo for.

Gotaways are illegal immigrants people see crossing the border but are never caught.

It’s a big border and observers are few; observers who think it’s worth the effort to call the Border Patrol are even fewer.

I don’t think my temn will ever end.

No matter, no one else should be held responsible for your temn poverty.

Texas should count them as residents for the next census. Then Texas could control the House!

They are counted. They always have been, because the constitution says they have to be.

But there aren’t that many of them, they don’t all stay in Texas, and the next census is 8 years away.

1/2 is politically congruent (“=”) People of Color, People of Brown, or Alien-American

That ” diversity is our strength” sure goes away when the rubber hits the road.

a country without borders is not a country

The USA’s borders were completely open until the 1860s or so. Does that mean it was not a country?

[catastrophic] [anthropogenic] immigration reform (CAIR) did not start with BidenCAIRs, but it has progressed with collateral damage on both sides of the bridge and throughout.

Trump should visit the construction sites where Biden is finishing the border.