Report: Illegal Immigrant ‘Gotaways’ Hit More Than Half a Million This Fiscal Year

Report: Illegal Immigrant ‘Gotaways’ Hit More Than Half a Million This Fiscal Year 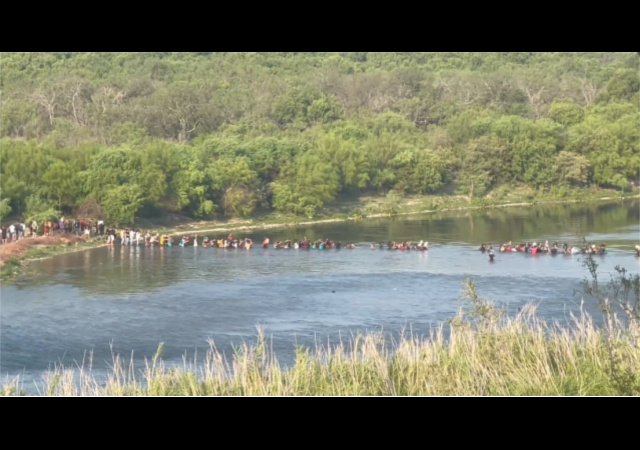 Sources within the Department of Homeland Security told Bill Melugin at Fox News that illegal immigrant “gotaways” have already hit over half a million this fiscal year.

Gotaways are illegal immigrants people see crossing the border but are never caught.

Backing this up— My DHS sources also confirm more than 500,000 gotaways since October.

A “gotaway” is someone seen on a camera or in a bailout/pursuit and never apprehended. https://t.co/uooxiiizpZ

Rep. Tony Gonzales (R-TX) told Trey Gowdy the border is “the furthest thing from secure” after a visit:

“It’s the furthest thing from secure. I represent 42% of the southern border. There’s certainly no one in my district who thinks it’s secure,” Gonzales said.

He recalled weeks prior in June that a tractor-trailer in Texas revealed a human smuggling operation that had over 50 migrants die after the truck was abandoned.

Although the situation appeared dire, Gonzales described meeting with Mayorkas to discuss ways to improve the migrant crisis.

“About three weeks ago, Secretary Mayorkas came to my office in D.C., we sat, and we spoke about a few things. I asked him for one thing in particular: to help with this crisis. That’s repatriation of flights out of Del Rio, Texas. Those are essentially flights for folks that do not qualify asylum which are about 95% of migrants coming over. They get put on a plane, and instead of getting sent to another I.C.E. detention in the United States, they get sent back to their country of origin. It’s the only way this goes away,” he explained.

Reporter: President Biden how can you say we are not in a recession?

Biden: The Proof is in the number of illegals crossing the border. They would not be coming here if we were in a recession.

Reporter: So illegals are the canary in the coal mine, so to speak?

Biden: Correct. When they quit coming I will announce we are in a recession and immediately take action to do something about it.

Reporter: What action will you take?

Biden: I will step down and turn it over to Kamala.

What ever happened to defend the country from enemies both foreign and domestic?

ThIS. IS. AN. INVASION

What an indefensible and appalling farce, courtesy of the vile Dumb-o-crats. There isn’t another country on Earth that conducts its immigration enforcement and border security with such total laxity and ineptitude as does the U.S.

not so – The UK, France, Holland, Germany are overrun with illegals from Africa & Islamic countries.

You people are racists! These beaners are just coming here to rape, rob, and murder those Americans are too lazy to.

Need to locate at least 10,000 Obamigrants into Ilhan, “The BruthaHumpa’s” , faith tradition district