Adams blamed AZ, TX, and the feds. But AZ and TX governors said they’re sending illegal immigrants only to D.C. 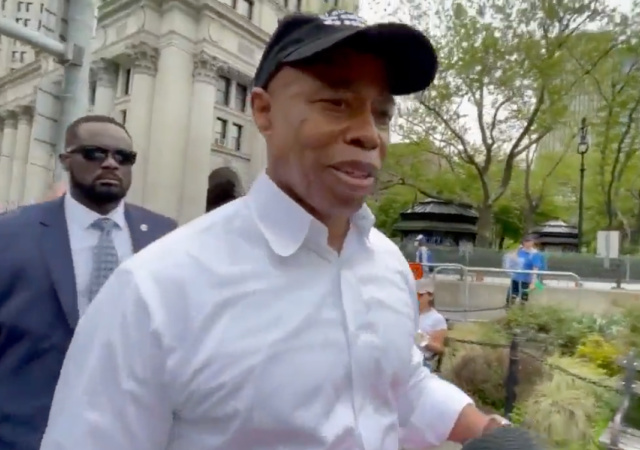 But as opposed to D.C., the problem in New York City is exacerbated by its “right to shelter” mandate, which means any homeless asylum seeker who comes to town, by any means, has to be put in a bed somewhere.

“Currently, New York City is experiencing a marked increase in the number of asylum seekers who are arriving from Latin America and other regions. In some instances, families are arriving on buses sent by the Texas and Arizona governments, while in other cases, it appears that individuals are being sent by the federal government,” Adams said in a statement, adding that more than 2,800 asylum seekers had entered the shelter system in recent weeks.

Adams insisted without federal assistance, the city “may struggle to provide basic services.” Here is his full statement:

“New York has been and will always be a city of immigrants that welcomes newcomers with open arms. This value has made our city a beacon of freedom for people around the world and the economic and cultural powerhouse that it is. These very same humanitarian values apply to those who are experiencing homelessness. In New York City, we have both a moral – and legal – obligation to house anyone who is experiencing homelessness for any reason. Currently, New York City is experiencing a marked increase in the number of asylum seekers who are arriving from Latin America and other regions. In some instances, families are arriving on buses sent by the Texas and Arizona governments, while in other cases, it appears that individuals are being sent by the federal government. In order to both meet the legal mandate as a right-to-shelter city and provide high-quality shelter and services for those who enter our system, New York City needs additional federal resources immediately. If we do not get these urgently needed resources, we may struggle to provide the proper level of support our clients deserve, while also facing challenges as we serve both a rapidly growing shelter population and new clients who are seeking asylum. We are calling on the federal government to partner with New York City as we help asylum seekers navigate this process, and to provide financial and technical resources. By law, asylum seekers have a right to be in the United States while they seek humanitarian protection. In New York City, we are responsible for the provision of services and infrastructure for newly arrived asylum seekers and currently residing populations alike. We’ve been in discussions with our federal partners on this matter and look forward to a quick resolution.”

Except there’s one problem. NBC New York reported the governors of Texas and Arizona said: “they were in fact sending asylum seekers to Washington – but not to New York City.”

Mayor Adams needs to get his facts straight and pay closer attention to what’s really occurring because our nation’s security depends on it. The State of Arizona is providing voluntary transportation for asylum seekers only to Washington, D.C., not NY. 1/ https://t.co/LiVVJo7Esi pic.twitter.com/AejYUEn3DG

We know the federal government has flown illegal immigrants to New York since August 2021. Then-Press Secretary Jen Psaki confirmed the administration put underage migrants on the planes. The New York Post report also shows adult men were on the plane.

A source told The New York Post the illegal immigrants arrived at the Westchester County Airport and then get on buses to places including the Bronx, Brooklyn, and Queens. Those are boroughs in New York City.

The New York City Department of Homeless Services confirmed “there are 28,885 individuals classed as a member of ‘family with children’ in the shelter system as of Sunday.” The stat is 12% higher than it had in March and “12% higher than this time last year.”

Residents at the Bellevue men’s shelter in Manhattan have “seen scares of Hispanic migrants arrive at the facility since last month.” One man said a total of 200 arrived during that time frame:

“At lunchtime, some would pull up. At dinner time, you see six or seven come in together. A bus takes them back and forth to somewhere else.”

Another resident said, “They come every day since I’ve been here.”

“I said, ‘Where you coming from, amigo?’ They say Venezuela,” he said. “They really don’t speak English that much.”

Jeffrey Harris, 56, said he shared a room with three migrants, adding, “I can’t understand them. It’s just ‘How you doing?’ That’s it.”

“If we can’t take care of the homeless here, how can we take immigrants?” he fumed. “They get all the resources in the world, but the ones who are here and homeless seem like they are forgotten about.”

A resident who gave his name as Dereick P. and said he was a 70-year-old Vietnam War veteran, called the situation “a sad state of affairs.”

“I slept in jungles. I’ve slept in foxholes. But I won’t sleep on the streets in the United States of America,” he said.

Now that cities like NYC & DC are seeing a small sample of what tiny TX & AZ border towns deal with daily, perhaps they’ll get some perspective on what it was like for Del Rio, TX, a population of 35,000, to have over 15,000 Haitians arrive in their city at once last September. https://t.co/MEw5T20dny

Here’s an idea… how about the Feds DO THEIR FUCKING JOBS and PREVENT the flow of illegal aliens into the country?

Sorry mayor, you’ll have to bus your new voters to D.C. for them to get those subsidies.

Just to see if I am tracking here, NYC has a generous welfare system part of which is their self declared policy as a ‘right to shelter City’. Now that the push/pull dynamic is causing an influx of people, assisted by the Biden Admin’s policy of midnight flights of the 200K monthly number of people who illegally cross our National borders away from the already overwhelmed border communities, the Mayor of NYC wants Federal dollars?

Did he and Mayor Bowser of DC advocate for additional Federal assistance to be deployed to the border communities in TX and AZ who have been struggling with the problems created by open borders for years? Given their relative silence on this issue until their own ox was being gored it seems a tad hypocritical on their part.

When you harbor fugitives, don’t be surprised when more fugitives show up.

NY doesn’t dare refuse them, but other communities, such as those in Texas, should greet the buses with armed deputies and tell them to keep moving along.

At least President Trump’s stay in Mexico policy had them somewhere where they could be understood.

Bang up job you are doing there, Kamala! (was that a poor choice of words?)

If it actually involved banging, it would be the only thing that whore has ever been qualified for.

Well, one of a few things. Ross Perot’s comment about the giant sucking sound coming from the border has new relevance these days, now that she’s the ‘border czarina’ or whatever the hell stupid position Pudding Head supposedly gave her.

Yeah, only the flow is northward rather than southward.

Interesting how these cities are “free and safe” for all illegals and now they do not want them. NYC wanted to let illegals to vote but the NY SOTUS said that only citizens could vote.

NYC is a sanctuary city. Illegals welcomed with open arms. Why the sudden change of heart? Oh, that’s because liberal sentiments cost nothing, but liberal problems do…

Yeah, they’re really generous when they think they’re only spending other people’s money.

Typical NIMBY. Doesn’t mind if illegal aliens come, but bitches about it once they start showing up on his doorstep.

Put up or shut up, jackass.

Warm up the buses, border states. Make sure the heaters work.

“Adams blamed AZ, TX, and the feds. But AZ and TX governors said they’re sending illegal immigrants only to D.C.”

Burn! Take it up with your “buddy” Brandon, it’s entirely his fault.

“the problem in New York City is exacerbated by its “right to shelter” mandate, which means any homeless asylum seeker who comes to town, by any means, has to be put in a bed somewhere… Adams insisted without federal assistance, the city “may struggle to provide basic services.”

Wow. Who knew there was an actual PRICE to pay for virtue signaling?!
“Our club passed a law to gibs people free stuff, but we can’t afford it, so we want your club to pay for it.”
Take agency and repeal your stupid law, you assholes.

You’d think they’d be celebrating this. They love it when those waves of human trash stay near the border.

There are not enough tacos in Texas to feed all the illegals. And in no time at all, word gets around and they want to be tasting some bagels and pastrami.

And groping some of that government tail.

If New Yorkers prefer representatives who offer more generous support for immigrants than the federal government , they have to pay for the extra support.

Adams doesn’t care how many Americans he offends, nor do New Yorkers.

Biden will help them, but it will just help doom America faster.

Adams doesn’t care or lacks the intelligence to know it.

Which is it, Mayor Adams?