You *literally* asked for this. 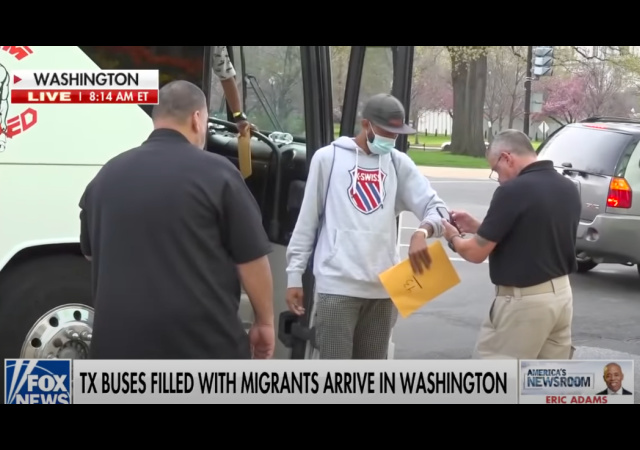 You reap what you sow. You wanted to be a sanctuary city, so here you go!

Texas Gov. Greg Abbott and Arizona Gov. Doug Ducey promised to send illegal immigrants to D.C. after the people overwhelmed the small border towns. Places like D.C. pushed to treat the rush of illegal immigrants as a human rights issue.

D.C. Mayor Muriel Bowser has sent almost $1 million to open borders groups to help illegal immigrants. Plus, she made it loud, and clear D.C. is a sanctuary city!

DC is a Sanctuary City per Mayor Bowser on Monday, November 14, 2016. Now, she can make good on that statement. pic.twitter.com/NehnLgq0yH

Ten days ago, D.C. Mayor Muriel Bowser complained about Texas and Arizona sending illegal immigrants to her city because the homeless shelters are filling up and, well, there are too many of them.

Today Bowser revealed she asked Biden and Defense Secretary Austin to activate the National Guard “to help prevent a prolonged humanitarian crisis in the nation’s capital.” She wants them to use the D.C. Armory as a processing center.

Neither Biden nor Austin has given Bowser an answer.

The letter also cracks me up because Bowser continues with her “it’s them, not me” attitude even though she has said over and over that D.C. is a sanctuary city.

Some great lines in the two letters:

“But the Governors or Texas and Arizona are making a political statement to the federal government, and instead, their actions are having direct impacts on city and regional resources in ways that are unsustainable.”

“The migrant crisis facing our city and our country through cruel political gamesmanship from the Governors of Texas and Arizona must be dealt with at a federal level.”

“Instead of rolling up their sleeves and working with the Biden/Harris administration on a real solution, Governors Abbott and Ducey have decided to use desperate people to score political points.”

But neither the local nor the federal government are willing to step up, volunteers say, and migrants are having to go to area homeless shelters or are even being deserted at Union Station, as donations dwindle and fatigue sets in. D.C. Mayor Muriel Bowser has cast this as a federal problem with a federal solution — a characterization that angers volunteers because they say that means Bowser, who’s called D.C. a sanctuary city, proves to be no different than Texas Gov. Greg Abbott or Arizona Gov. Doug Ducey who are trying to offload migrants on the Biden administration.

“Washingtonians, as people, are here, present, but their government is not here,” says Isaias Guerrero, a volunteer with the Migrant Solidarity Mutual Aid Network, a grassroots network led by Black and brown femmes and immigrants that represents over 20 local social justice groups.

“We don’t see anybody from Mayor Bowser’s office here. We don’t see anybody from the Office of Latino Affairs here to say ‘Welcome, how can we support you’ even if it’s with like waters,” he continues. “People just want to wash their hands because this is seen as a hot potato. But what it should be seen as is an opportunity for us to actually create a model of being welcoming.”

What could DC do?

Post editorial board said DC could apply for the same FEMA grant that the nonprofit co-leading the migrant response applied for and create its own set up. At a meeting last Friday, a FEMA rep encouraged local nonprofits and governments to do that too. pic.twitter.com/6HW30JUMcT

How many times have Ducey and Abbott asked for help at the federal level? Isn’t Harris the border czar? Oh, wait.

Arizona has called on the Biden admin since April 2021 to declare a national emergency and deploy the powers of the federal government. No response. So we deployed the National Guard on our own, with state resources. https://t.co/wZldlhuKmY

WE are laughing our A$$E$ OFF

Another example of our warped modern culture in that of seeking outside validation of choices (I am a good and virtuous person because I support X) while rejecting any accountability for those choices. Every decision made has positive and negative aspects, when the negatives outweigh the positive a prudent person or govt chooses something else.

The d/prog hate accountability. It interferes with their utopian ideals. As my favorite Drill SGT was fond of telling us ‘it’s time for consequences and repercussions’.

Virtue signaling is cheap
Until actual payment comes due.
Way past time you learned that, Bowser, you sanctimonious little weasel.

Yep, the revenge of reality.

This is the same silly bint that refused NG aid offered by President Trump for the J6 “insurrection,” but calls for it now, when she is getting exactly what she asked for by making DC a sanctuary city.

You asked for it, now you have it. Chew each bite of crow 32 times.

Here’s an idea… how about the National Guard shuts down the border and solves the alien-invasion problem for ALL the states and cities?

And then, once the border is truly secure, we can FINISH THE WALL.

Which is why Mayor Browser is likely to be ignored by the Biden Admin. First the Biden Admin doesn’t want to stop it, second if they respond in DC they lend credence to potential Art IV claims from TX or AZ. The Biden Admin wants no part of helping make the case directly or indirectly that an ‘invasion’ exists.

No, you’re missing the subtext. This is a statement that reads between the lines: “Hey, send us more money for our slush funds and drag some of these people out into red states or we’ll make a public fuss.”

I am fond of the expression, “Those who tout diversity do not want to live next door to their opinions.”

Mayor Bowser’s lack of compassion and lust for power has marked her as a truly horrible and inferior human being. She has been silent in the face of all the pain, suffering and death on the border because it was part of her party’s scheme to obtain and keep power. She still doesn’t mention the pain, suffering and death among the immigrants but loudly complains that the border governors’ desperate efforts at the broken border are making her life difficult. Both the Mayor and her voters should be judged pieces of Schiff in light of their actions and character. Disgusting.

Maybe it’s the news that so many of them plan to vote Republican that is hitting home. The “replacements” may end up replacing the “wrong” people.

But it will be ten years before DC Republicans (assuming there are any left) figure that out and begin to offer candidates on the city ballot. The Gomers already made that mistake next door in Virginia, and lost the whole damn state for a disastrous term.

Easy way to bring this to head would be to start bringing in about 5 to 10 k Ukrainians from Poland etc to NYC Dc Balto Philly Chi etc every day.
Be funniest thing in world to see Black/libby mayors dealing with blond ultra white white boys girls. Explaining how racist it is to bring in to us people who can hit ground running.

I ran out of patience for arguing with liberals a long time ago. Nowadays I like to dismiss them with “may you be blessed to live in the world of your own making”.

There are so many illegal aliens, Carlson is right. Send them to Martha’s vineyard, Hollywood, you name it.

And keep them coming, just like Del Rio has to deal with EVERY DAY, and all the border towns.

Make the left as miserable as they have made us.

Suck it up, Bow-Wow. You’ve got far more resources than border towns in the USA. It’s time for you to pay “your fair share”.

I ran across this today in another context but it could be applied to Mayor Bowser:

“Winston Churchill was a magnanimous man of exemplary character, yet Stanley Baldwin tested his limits. He held Baldwin responsible for Britain’s lack of preparedness to go to war with Germany when the crisis inevitably came, as Richard Langworth recounts. During the blitz, when informed that a German bomb had fallen on Baldwin’s house, Churchill quipped, “What base ingratitude“.”

I have to admit that one of my first thoughts upon seeing this post by Ms. Chastain was that it was a wonderful way to convince members of the National Guard to get out as soon as they could, and to discourage new enlistees. The NG members know that they will be the scapegoats for anything that does not match the Leftist ideals of the moment.

National Guard members are still taking pain meds for their sore backs from sleeping on the floor in a DC garage while illegals were put up in hotels.

So DC is a sanctuary city, except when it has to provide sanctuary to illegals. Typical Leftist mentality: always virtue signaling without thinking they will ever need to be virtuous.

So Mayor Bow Wow talks the talk; but when it comes time to walk the walk—well she didn’t really mean the talk. What a maroon!

And that is different from every single Democrat how? 😉

Will the Sundowner Puppeteers come to the rescue?

The national Guard should get some yellow paint and paint a giant Welcome sign in the street. It’s a Sanctuary city.

“BROWN LIVES MATTER,” in front of the District Building.

Why does it need to be the National Guard? Surely social workers would be better for a task like this. The D.C. bureaucracy no doubt has a plethora of such folks. Or maybe the glorious SJWs in Antifa could take it on; they’re civil rights heroes, right?

Nah, let the DC taxpayers shoulder the same burden the taxpayers in border States have had to forever.

Oh, and increase the flow of busses at least tenfold.

Can someone provide buses for illegals to take to downtown SF? They can watch movies espousing the wonders of SF’s welfare and services for illegals.

“For your own safety, please watch your step when exiting the bus.
And for the reminder of your time in San Francisco.”

“Stay away from the natives and don’t touch anything”

They want “federal help”. That’s our money, taxpayer money. All the aid agencies getting billions of dollars in grants and payments are friends, family, donors and people with connections. This is just another money laundering scheme. Another way to get OUR money into THEIR pockets. Just like homeless in California. I think that was their business model, they took it nationwide. At first I thought it was about importing a huge block of voters. It’s all about the money.