“Mosby, a Democrat, directed her office to stop prosecuting offenses such as drug possession, prostitution, urinating in public, and more….” 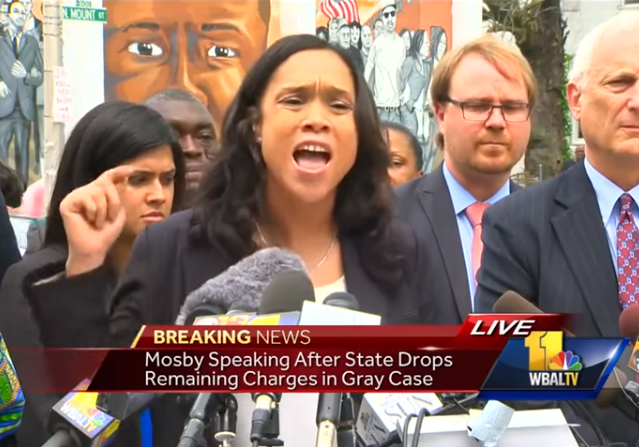 When Soros-backed socialist son of convicted terrorists Chesa Boudin was recalled as San Francisco DA, the writing was on the wall. “Decarceration” is a disaster for everyone . . . except criminals.

Now another Soros-backed “decarceration” state’s attorney has lost her reelection bid.  It’s not clear if the multiple crimes for which Marilyn Mosby has been charged are the impetus for Baltimore’s voters deciding it’s time to move on or if it’s the shocking crime rates in the city as a result of her radical anti-law and order agenda.  Maybe both.

Mosby rose to national attention in the wake of the Freddie Gray riots and for her hyper-politicized botching of the prosecution in those cases.

Baltimore State’s Attorney Marilyn Mosby lost her reelection bid to defense attorney Ivan Bates in the Democratic primary after she was indicted by a grand jury on federal charges alleging that she used coronavirus hardship as a reason to take money out of her city retirement account.

Mosby, a Democrat, directed her office to stop prosecuting offenses such as drug possession, prostitution, urinating in public, and more during the coronavirus pandemic in an attempt to stop the virus from spreading in jails and prisons.

Her own alleged corruption along with multiple and various criminal indictments against her had to have played a part in her defeat.

Mosby was indicted in January on charges of perjury and making false mortgage applications, both relating to vacation home purchases in Florida.

Court documents state that Mosby allegedly lied when citing coronavirus hardship as a reason to make withdrawals from her city retirement account and allegedly certified that she met at least one qualification for distribution under the CARES Act and “affirm[ed] under penalties for perjury the statements and acknowledgments made in this request.”

Federal prosecutors allege Mosby then used the money for down payments on two separate vacation homes in Florida.

. . . . Prosecutors also alleged that Mosby lied on two mortgage applications, failing to disclose that she had unpaid federal taxes from previous years in addition to the IRS placing a $45,022 lien against all property that Mosby and her husband owned.

Mosby is also accused of lying in order to get a lower interest rate on the mortgage for her Kissimmee, Florida, vacation home by claiming it was a second home. Prosecutors allege that prior to claiming the “second home rider,” Mosby entered an agreement with a vacation home management company that gave the company control over renting out the property.

Her attorney told Fox News that Mosby is innocent and just a victim of racism.

Mosby’s attorney, A. Scott Bolden, initially told FOX 45 in a statement that his client did nothing wrong.

“Marilyn Mosby is innocent, has been innocent, and we look forward to defending her in the court of law, and presenting evidence of her innocence to a jury of her peers. We will fight these charges vigorously, and I remain confident that once all the evidence is presented, that she will prevail against these bogus charges—charges that are rooted in personal, political and racial animus five months from her election,” Bolden said.

That’s unlikely to fly given the reported evidence and charges. Baltimore will have a new state’s attorney, but it’s almost certainly going be Ivan Bates, another Democrat, so who knows how that plays out.

I wiped my eyes, but was fresh out of tears.

Now that is great news!

Two down and dozens more to go. We need to be going after the AG’s too. Like Governor Hair Gel’s appointee Robert Bonta in CA.

Now how about finally trying her for her crimes and put her in jail where she belongs?

I agree, but, you’re asking a lot.

“ Her attorney told Fox News that Mosby is innocent and just a victim of racism.”

You can bet that being black, female, and Leftist will protect her from the statutory violations. A deal has almost assuredly been cut already that will involve no penalty for her or her husband. In a country with multiple versions of the “rule of law” the Nomenklatura and their tools are immune.

Racism. It’s like coffee. Or beer. Or red wind. Or global warming.

There’s nothing it can’t do. It’s a freaking miracle drug.

So when can some one prosecute Soros for all the pain and misery he has created in America? He deserves to spend his twilight years in a 6×12 cage for all the suffering he has financed and pressed upon America.

He hasn’t broken any laws.

So just lynch the fiend.

Ivan Bates is probably just slightly less of a degenerate criminal than Mosby, but give him time.

But how do you know whether they are black, or a woman?

I have an undergraduate degree with a heavy emphasis in biology. I’m sort of an agnostic when it comes to race. But if someone is or isn’t a woman, I didn’t need a degree to make me an expert. I figured that out before high school.

Diversity [dogma] breeds adversity. There may be hope yet.

Freddy’s dead. Mosby’s just about gone. Even Baltimore gets lucky, one in awhile.

Yes, that was in my mind, as well.

One of my favorite soundtracks, RIP Curtis.

There are many Mosby imitators who have had no contact with Soros. Like Mosby, these will yell ‘racism’ too. Yell until it is so common place that nobody even listens any more.

I’m surprised she lasted this long. She is incompetent, corrupt, and ignorant, and has been since 2013. She should have been gone a long time ago. The damage she’s done to Baltimore is incalculable.

Won’t make a difference. Baltimore is too far gone to be saved. It’s Detroit on the Chesapeake.

They’re always good at doing the “angry finger-point at a podium” move. Chief Lizzie and Comrade Bernie are pros.

It wasn’t just Marilyn’s ethical lapses that did her in, nor her Federal indictment, nor her malicious, political prosecution of the police, nor her juking her conviction stats and not even her non-prosecution of minor crimes in the name of equity; all of this are the norm for Baltimore’s elected officials. The final straw is that Marilyn was forced to publish her prosecution stats on major crime including illegal gun prosecutions (which was her priority to reduce violent crime) and it finally became clear that she is just plain incompetent.

As of today, for 2022 there are 1885 illegal gun possession arrests, 187 trials and 176 convictions on a slam-dunk prosecution. So 90% of illegal carry arrests were dismissed and a whopping 9% true conviction rate instead of the contrived 94% conviction rate which ignores dismissals.

Murder prosecutions are just as bad for 2022. Total of 60 trials with 48 convictions and 12 not guilty verdicts out of 70 arrests.. That’s a whopping 68% not the touted 80% on her dashboard.

It became clear to the electorate that Marilyn ran the Baltimore State’s Attorney’s office into the ground and the revolving door of arrests/release spiked the crime rates and reduced their quality of life.

Even so, Marilyn garnered 30% of the primary vote. Baltimore’s single-party system and identity politics keeps producing the same result so don’t expect any turn-around in the long term.

The other thing that has rightfully hurt Mosby is that prosecutors have been leaving her office in astounding numbers.

When people in your own office who deal with you on a day to day basis not only won’t support you, but have come out and spoken how horrible she is as a leader, prosecutor and human being, on top of everything else, she had no chance.

As for garnering 30%, some exit polls indicated that people voted for her because she was the incumbent and they didn’t know much about the other candidates.

Sort of “the devil that you know is better than the one you do not know.”

Wow! 12 “not guilty” verdicts out of 60 murder trials? That 20% losing rate is an extra-strength level of incompetence. Could she not figure out how to plea bargain marginal cases to get a conviction on a lesser charge?

Plea bargaining was one of the things she was doing and she would release stats showing that her office had “won” the cases.

The problem was that she was bargaining murders down to simple assault. Robbery with a weapon was being bargained down to things like shoplifting.

The Baltimore Sun did an analysis of the cases and found that most of the “convictions” Mosby claimed did not serve time for major crimes.