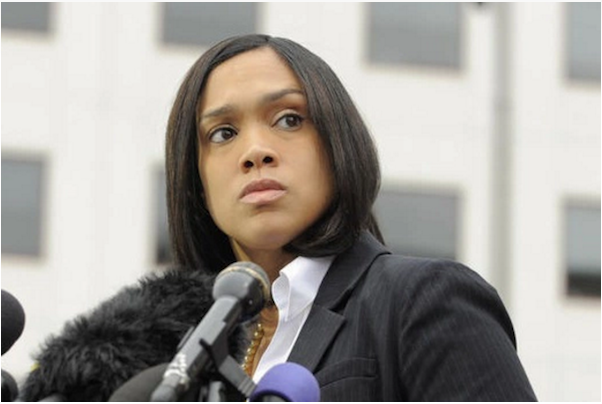 On May 26 we posted that two of the six police officers charged in the death of Freddie Gray—Sergeant Alicia White and Officer William Porter—had filed defamation and invasion of privacy charges against Maryland State’s Attorney Marilyn Mosby and Major Samuel Cogen of the Baltimore City Sheriff’s Office . It was Cogen who swore out criminal charges against the officers, presumably at Mosby’s request.

We followed this up with a post on June 8 noting that the two officers had amended their complaint to include allegations of malicious prosecution, false arrest, and violation of the Maryland declaration of rights, article 24 and 26. At the same time, we noted that a third officer, Lieutenant Brian Rice, had filed a civil suit against Mosby on similar grounds.

Today we learned that another two officers, Officers Garrett Miller and Edward Nero, have jointly filed similar charges against Mosby. In total, now, five of the six officers charged by Mosby in Gray’s death are suing her and Cogen for various forms of misconduct.

According to reporting by the Atlanta Black Star, Officers Garrett Miller and Edward Nero have now filed suit against Mosby and Cogen for defamation, violation of their constitutional rights, false arrest, and false imprisonment. Nero was acquitted last week in his trial of manslaughter and other related charges.

Both officers claim that the men:

[W]ere falsely charged as a direct result of an improperly motivated investigation, false charges and false statement made by Defendants Mosby and Cogen …

The suit is being heard before Federal US District Court Judge Marvin Garbis.

Not a lawyer, but can they also sue the prosecution for withholding evidence beneficial to the defense?
http://abcnews.go.com/US/judge-finds-prosecutors-withheld-evidence-freddie-gray-officer/story?id=39725459

Normally, these two would have fairly extensive immunity from suit. But maybe not here. The problem for them is how nakedly political these prosecutions are. If they had stopped with just indicting the driver, then maybe they might have been ok. But he was Black, and they needed White scalps, so all 6 were charged, with most of the charges blatantly lacking probable cause. The Terry Stop was legal, because Grey ran upon seeing the cops. And the arrest was legal, because the knife was in plain sight and was illegal under the Baltimore ordinance cited in the arrest paperwork. If the situation were reversed, and Grey were on trial, the judge wouldn’t have blinked in regards to the legality of the arrest – likely he deals with much more questionable arrests every day. I have little doubt that Mosby grossly misrepresented the evidence to the Grand Jury – such as forgetting to mention that while the knife was not illegal under MD law, Grey was cited under the Baltimore ordinance. Reasonably good faith is assumed when granting people like these two immunity in order to perform their duties. But there was no good faith there. The six officers were arrested and put on trial for purely political reasons – to quell race riots and help Mosby’s husband politically, neither of which is a legally justifiable reason to arrest these cops and put them on trial.

The base civil claim is probably 42 USC 1983 deprivation of their civil rights. Normally a prosecutor’s failure to disclose potentially exculpatory evidence would only maybe get their hands slapped. But here, it might be cumulative with the rest of the civil rights violations. It maybe is part of a pattern, which is why I might try to get it added. Except that it was one of Mosby’s minions who did this, and it may be hard to tie it to her.

Is it safe for me to conclude that this is not going according to the SJW Chief’s plan?

This whole sordid tale should be made into a comedy (think ‘Its’ a Mad, Mad, Mad World) staring Marilyn Mosby and her Keystone Kops with cameo appearances by Al Sharpton, Jesse Jackson, Hillary Klinton (and her fake accents) and al-Chicagi in the Buster Keaton role.

Mosby looks exactly like Mussolini in that pic- and her actions are the same.

Garbis is a Bush appointee. Cause for optimism?

Are they unions supporting these guys at all? I’d hope- if they were good for anything, they’d be central here.

IIRC the unions are providing the defense in the criminal cases.

Boy, they better! That was about the only thing I saw the police union I belonged to did of any value. That and the annual BBQ.

There should be blue flu every weekend until she resigns. Every single Friday and Saturday night they can barely cover the city jail much less the streets. They’ll have brass serving paper lunches into the holding cells because they can’t find enough deputies to watch mainline.