Ten years ago today Andrew Breitbart died. I just can’t stop thinking about what might have been.

I remember that day

We should focus on how much good he did in standing up against the left-wing smear machine, which now will be celebrating for sure.

I wrote this personal note later in the day:

On March 1, 2012, Andrew Breitbart died. Each year we remember him, and try to focus on various aspects of his life and legacy.

Andrew saw the challenge facing our society more clearly than most:

He saw the corrupt media for what it was long before others awakened to the threat they pose:

The attacks on Andrew by the cabal of left wing media and activists will sound very familiar in that false narratives were completely invented, with malicious racial framing. Not that I could change the narrative, but I repeatedly rebutted the false allegation that Andrew released a misleading video of Shirley Sherrod:

Faced with the Sherrod smear, Andrew taught us a lesson that became useful during the 2020-2021 cancel culture purges. “Apologize, for what?” became most associated with him, and it was phrase he tweeted the day of his death: 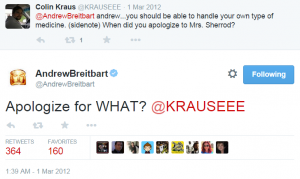 And from James O’Keefe and Project Veritas:

We have our own special connection. Mary Chastain knew Andrew and used to work at Breitbart.com. 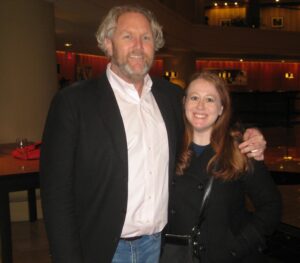 Our Editor Emerita Mandy Nagy was particularly close to Andrew: 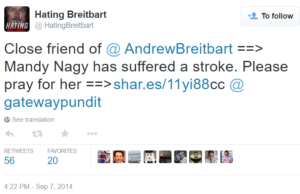 It may not be healthy to dwell on what might have been.

Sorry, right now I just can’t stop thinking about what might have been.

“There are few people who are irreplaceable, but Andrew may have been one of those few.”

I can’t believe it’s been ten years. His passing was a great loss. Thank you Professor, for the reminder.

Yet Nazinan and slime all Schumer are always be and kicking

I do think Andrew was poisoned, just my 2 cents

I never found Rush to be irreplaceable.

Andrew Breitbart, though, was a horse of a different color. He got James O’Keefe and Kurt Schlichter and God knows who else, exposure or started in reporting/writing.

His family and friends said he had a heart condition. I don’t understand why he didn’t live as long as Dick Cheney who had a bad heart….

I know about the heart condition, I still think he was poisoned. You don’t turn funny colors when your heart gives out.

A combination of cyanosis and pallor can change your color in to a series of hues during cardiogenic shock.

He gave me courage, especially watching him in Madison when the left, by the thousands overtook the State Capital

Jan 6 protesters would not be in prison right now if he were alive I believe.
He wouldn’t let us cower…

Thank you, Professor, for the reminder. Your humanity shines through, as does your seriousness about fighting leftist poison.

I remember weeping when I heard he had died. My own reaction surprised me. I was just overcome with the utter loss of Andrew Breitbart no longer being on the earth.

Breitbart and Limbaugh pioneered news and commentary for conservatives

He and his influence continue to leave a void. Even his website has run somewhat astray at times without him.

One thing I noticed: within two weeks of his death, the site became cluttered with glitter-blink ads; the comments section went from quite interesting to below the level of Gateway Pundit, and the general clutter and unsightliness of the site made it hard on the eyes.

Until the death of Rush, defenders of freedom and the Constitution in our country, had suffered no greater loss.

Andrew was a warrior who has been sorely missed.

Andrew woke up America to take back and give voice to how we could all take back what the left was destroying. Ironic that the reference used today which describes the progressive left is the term “Woke”. Perhaps as a reminder that the left can never go back to where they held the narrative unchallenged. We miss him and are thankful for the time he had and what he had to share. The ability to visit L.I. and all the contributing writers here each day with Prof. J. leading the way is a testament to Andrew’s legacy of founding Breitbart.