Saw this over at Instapundit (emphasis mine):

Althouse links to this post at Slate.com, The Citizen Journalist, which contains the following (emphasis mine):

… Breitbart went on Real Time With Bill Maher and stood up for himself and Rush to the politically correct hometown mob of an audience, and it was an incredibly committed moment in his life. He found himself the leader of a loose band of patriotic malcontents, and right in front of him was the same opportunity that the Founding Fathers had had—to fight a revolution against the complex.

And if he happened to get an Agriculture Department official named Shirley Sherrod fired by releasing a deceptively edited video that seemed to show her making anti-white comments when in fact she was doing just the opposite—fuck it, did the other side play fair? Anyway, Old Media’s rules about truth and objectivity were dead. What mattered was getting maximum bang from a story, changing the narrative. That was why Breitbart was winning, with ample help from his media enemies, and why he must have been at least semi-sober during his college classes on moral relativism.

I debunked the claim with a frame-by-frame analysis showing that each of the elements which critics claimed were missing from the tape actually were in the tape, Repeat after me: “The Shirley Sherrod tape was not misleading”:

With Andrew Breitbart’s death this week, one of the most persistent falsehoods has resurfaced, the claim that the original tape released of Shirley Sherrod’s speech to an NAACP Chapter was misleading or defamatory in that it did not reveal that Sherrod’s discrimination against a white farmer was long ago, that she ended up helping him, and that she had since changed her view….

Whether innocent or malicious, the narrative is wrong.

I originally analyzed the alleged falsehoods when the controversy first broke in July 2010, The Original Sherrod Clip Was Not “False”.

The myth lives on because it’s a lazy, cheap way to denigrate Andrew Breitbart. 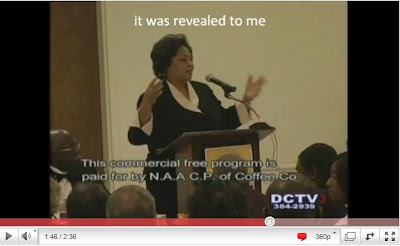 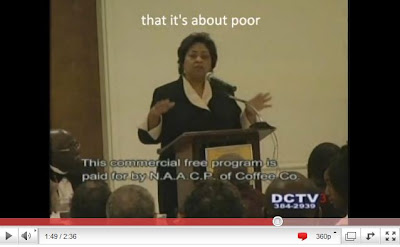 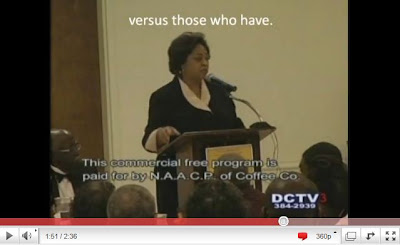 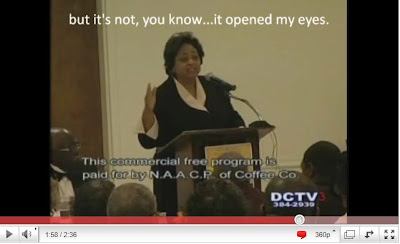 Hence, each of the key elements of the alleged falsity — the fact of the discrimination being in the past, that Sherrod did help the farmer, and that Sherrod’s tale was one of not being racist after the incident — all were disclosed in the edited video which forms the basis for the lawsuit.

And then Repeat after me again and again: “The Shirley Sherrod tape was not misleading”

Update: A reader sent along this video clip, which reminds me of something I often forget. Not only was the clip not “deceptively edited,” the point Breitbart made was not about Sherrod but about the audience reaction when she initially recited how she discriminated against a white farmer (the crowd applauded). Other people turned it into a story about Sherrod, and called her racist (the edited take contains the contrary information about her transformation, see above):

If you tell a lie enough times it becomes true.

“The myth lives on because it’s a lazy, cheap way to denigrate Andrew Breitbart.”

Well, and because the Collective lives by the lie.

AND by the hatred they nurture in themselves, which justifies this sort of casual character assassination.

I’m always fascinated….well, maybe just entertained when a scorned progressive refuses to give up their illogical or false battle. They just hate to lose any political argument. So keeping a false story alive about Breitbart appears to be the only tool left from the tools who want to dimish his effect even after his death. Clearly, it isn’t working. And clearly it doesn’t matter to some (like ‘writers’ at Slate).

Jeremy Peters of the NY Times made the same claim after Breitbart died. I challenged him about it on his blog and he had no response.

They won’t stop making the charge. “Lazy and cheap” are the Left’s stock in trade. What else can they do? The robust and intrepid potency and integrity of Breitbart’s work — his inimitable liberalness (that’s right, Left, you don’t know the meaning of the word) mortifies them. They couldn’t engage him on his arguments when he was alive; so grubby, existential grave-robbers that they are, they go after his legacy.

I went over to Slate and dropped in a link to this piece. Lefties no likey.

Read this in the LA Times from my former high school classmate, and journo-List hack extraordinaire, about Breitbart and Sherrod. Breitbart called him out on TV, and Patterico has shredded him many times. Michelle Malkin chewed him up, and Hugh Hewitt made a fool of him on the radio. But he never learns and always comes back for more:

“On the Media: Even when in error, Andrew Breitbart is on the attack. The conservative agitator didn’t bother to vet the video that damaged Shirley Sherrod’s character, yet he’s unapologetic.”

“Andrew Breitbart, the conservative agitator behind websites like Breitbart.com and BigGovernment.com, likes it this way. Stirring the pot, gobbling up chunks of cable television time, doing whatever it takes to further his political beliefs, even if it means putting one woman’s reputation through a meat grinder.

“The severely edited video posted on Breitbart’s BigGovernment.com shows Sherrod, who is black, telling an NAACP gathering in March that she had once scrimped on assistance to a white man in danger of losing his farm. Not included in the video posting was the bulk of Sherrod’s talk, in which she recognized the error of her ways a quarter of a century ago and helped the white man, saving his farm. As a result, the farm advocate and the white family formed a lasting friendship.

“Breitbart headlined the video as “proof” that “the NAACP awards racism,” when in fact it showed one woman trying to teach a lesson about the shortcomings of racial discrimination.

Conservatives including David Frum and Ann Coulter have acknowledged that the video Breitbart posted is a fraud. But Frum, a former speechwriter in the Bush White House, wrote that he has seen this act too many times to expect Breitbart to apologize for “distributing a doctored tape to defame and destroy someone.”

Indeed, anyone who has watched television in recent days has seen an unrepentant Breitbart insisting he did nothing wrong. His previous encounters with controversy reveal a similar pattern — make no concessions, savage critics, change the subject and keep attacking. Don’t bet he’s finished with Shirley Sherrod.

I saw this up close last year when I wrote about the “sting” that a couple of young videographers performed on the liberal activist group ACORN. Breitbart posted and touted the videos as proof of liberal evil. He became enraged when I urged him to release the unedited tapes so the public could see everything that happened between ACORN workers and videographers James O’Keefe and Hannah Giles.”

This is typical Rainey hackdom. As one Media Matter’s staffer said, “Jim Rainey at the LA Times took a lot of our stuff.”

Read the whole thing and weep:

And don’t miss Patterico’s smack-down of the thoroughly dishonest Rainey:

“James Rainey: Breitbart was Irresponsible for doing what I do all the time.”

As I recall it waz Obama who threw Shirley under the bus in his haste to avoid being tarred by this and later apologized for doing so. And wasn’t Breitbart attacked for exposing Pigford earlier on and most recently completely validated by the facts? Funny never saw the LEDE on that in the NytWapoMsnbcCnn and SlateKosHuffpoDU wannabe echochamber. Wonder if thats in the book?

Excellent work, Professor. There is a time for twitting and a time for context. The journalists — or is it JournoLists? — should not be permitted to escape scrutiny from withholding the latter. Close but inaccurate should be grounds for dismissal of their press rights.

And if he happened to get an Agriculture Department official named Shirley Sherrod fired by releasing a deceptively edited video that seemed to show her making anti-white comments when in fact she was doing just the opposite—fuck it, did the other side play fair? …

Isn’t this libel? Or does it supposedly not matter because he’s dead, never mind the still-living organization and everyone associated with it?

Bill O’Reilly keeps saying the tape was edited, too. Wish one of his researchers would read this page!

There is a class of Blacks (names are numerous, you know who/whom they are, pick one or all HINT: One will show his racist Black face at Zimmerman’s trial) that choose to have SLAVERY, held over the heads of all other races and ethnicities, for EFFING ever.

The highest group, elite leftists love it because they have THAT TYPE class of Blacks, STILL in slavery. For’effing’get their race lines in Africa. ‘thats not my prob’ crap!

The “color” (if one must use that term) such as Thomas Sowell, Condi Rice, Allen West, Tim Scott, Deroy Murdock, et al, are FREE from the “color” stigmatization. They see NO COLOR, therefore NO COLOR is seen, nor hinted at, in them.

There was a time, that the Irish, Germans, Dutch et al, denigrated us Sicilian/Italian’s and boldly made that known, by hangings (New Orlean’s) shootings, yada-yada UNTIL earlier persons of my ethnicity brought to the U.S. and ‘honor society’ that is.

OH, Black racists, be happy, look what happened to the Red Man, back in those days of Yore. Rounded up and placed on little pieces of worthless land. Those folks are still there, their revenge is now taking hundreds of millions of dollars, thanks to casinos.

Ever here of enterprise, Black racists? Nahhh, ‘i wants dem to pay foeveh’..

Once I was outraged that the MSM squandered the trust placed in them and abdicating their responsibility to be essential check on power as a free press. But you see the pattern enough …Rather on the falsified memo. CNN pandering to Saddams PR guy. Journolist… and you wake up and realize that if an ideal ever did exist at the J-schools and the large orgs its been long gone for years.

So thanks Prof for the reminder of how one man can make a stand and how the truth will outlast those who pervert it in their latest left-wing version of the ends justifies the means. Didnt work for Marx Lenin Hitler PolPot Mugabe Chavez and it wont work for thr NYT CNN NLMSNBC NYT WAPO or Slate wannabes either. Press on. We Are All Breitbart.

[…] long ago William Jacobson did a detailed analysis of this false claim showing clearly that there was no “deceptively edited video,” but […]

[…] long ago William Jacobson did a detailed analysis of this false claim showing clearly that there was no “deceptively edited video,” but […]