Andrew lived in a world without restraints.   He could be who he wanted to be, a luxury few bloggers have, particularly those who blog under their own name and work for others.

I’ve often wondered where to go with this blog.  I now know.

So much has changed, but not the core fight.

I’ve tried to do my small part in honoring his legacy by fighting the relentless battle to set the record straight that he did not misleadingly edit the video of Shirley Sherrod:

This is still my favorite interview of him, by Prof. Glenn Reynolds and the Instawife:

When I think of Andrew, my mind also runs to Mandy. 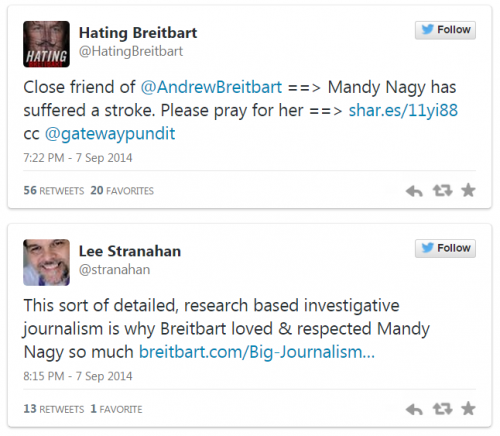 I miss them both.

I heard some of the rebroadcast of Levin’s interview with Brietbart and it reminded me of how much we lost when that courageous man died.

“Wherever you go, whether it be a college campus or the New York Times or ABC News or Venezuela or Cuba or the former Soviet Union, it’s amazing how the speech codes and the trying to shut up dissent is a defining aspect of the left because they believe so firmly in their utopian ideals that anyone who would disagree with that utopia is an enemy of the state, and they treat them as such.” Andrew Breitbart

I’m not a conspiracy theorist, but I still don’t believe the “natural causes” claim, one hundred percent. He was causing more angst and fear to the Obama/Clinton group than everyone else combined back then.

During all the scandals and evil doings over the last several years, we constantly would say “I wish Breitbart were here”.

I don’t quite buy that either, John. Although he was certainly under a great deal of pressure.

I still remember the time when name Breitbart meant something order of magnitude better than what it means today.

Oh yes, Breitbart is missed badly! To think what he would have done with the Project Veritas videos of the Dems’ dirty tricks last fall !
Too bad, that magnificent effort fizzled, rather than producing the fire storm if rightfully should have.

How crass, how blatant must Demokrats act, to be held accountable?