“While there’s been no indication yet that the activist had ties to any right-wing organizations, the shooting comes amid a rise in threats against politicians fueled by increasingly violent rhetoric coming from extremist Republicans.” 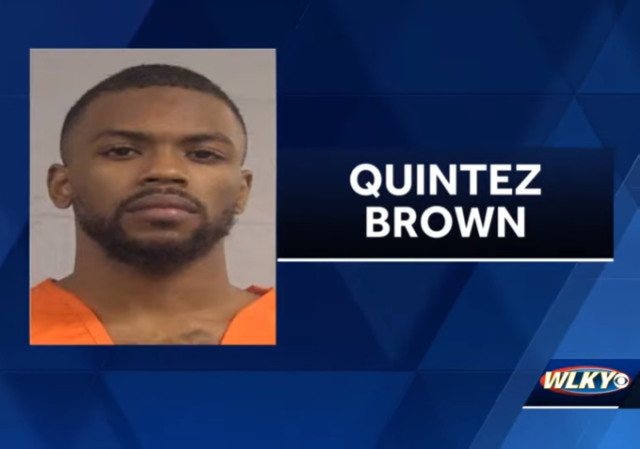 I’ve seen some crazy newspaper editorials in my time, but one that went up Wednesday by the Las Vegas Sun may just take the case for the craziest and most predictable ever.

The piece was written in response to the attempted assassination of Louisville, Ky. mayoral candidate Craig Greenberg, a Jewish Democrat who was reportedly in his office with members of his campaign team Monday morning when 21-year-old Black Lives Matter activist and gun control advocate Quintez Brown allegedly opened fire.

According to Greenberg, one of the bullets allegedly fired by Brown grazed the sweater he wore. Fortunately, no one was hurt thanks to a quick-thinking campaign staffer.

Before Monday, Brown was running as an independent candidate for the Louisville Metro Council. I think it’s safe to say that his campaign has been put on hold for the foreseeable future.

As for the Las Vegas Sun editorial board, they managed to devote about 90% of their lengthy diatribe to blaming … “violent rhetoric from extremist Republicans” for Brown’s alleged murder attempt on Greenberg. In the original piece they published, the Sun merely noted that Brown – who was named, arrested, and in police custody by the time the editorial went live – was a “political activist,” leaving out his extensive ties to the BLM movement.

Here’s how it started out:

A terrifying incident in Louisville, Ky., this week revealed the dangers of the talk coming from the right about civil war and political violence.

When they got to talking about Brown, the Sun also managed to leave out his name in addition to not noting that he was a well-known BLM activist in the Louisville area as well as a columnist for the Courier-Journal. Again, from the editorial:

The alleged shooter, a 21-year-old political activist, was arrested near the scene and later charged with attempted murder along with four counts of wanton endangerment.

While there’s been no indication yet that the activist had ties to any right-wing organizations, the shooting comes amid a rise in threats against politicians fueled by increasingly violent rhetoric coming from extremist Republicans.

The Sun then went on to reference at length a recent article from the New York Times that claimed there had been an alarming rise in violent threats made against elected officials at all levels of government since 2016, which the supposed newspaper of record of course blamed on former President Donald Trump.

The only nod the Sun gave to violent left-wing extremists like the ones we saw loot and set fire to Democrat-run cities across America for several months in the summer of 2020 during the Antifa/BLM-led riots was this throw-away line about how “most” threats supposedly come from the right:

Not all of these threats are coming from the right, but the Times found that most were.

And despite their tepid acknowledgment about left-wing violence, the Sun proclaimed that “the GOP has largely fueled this problem” and suggested that “it holds the lion’s share of the responsibility for addressing it.”

At some point late Wednesday afternoon, perhaps in response to being called out for leaving out facts about the alleged shooter that are inconvenient to their narratives about “violent right-wing rhetoric” fueling political violence, the Sun made some revisions to their piece but still managed to spend the bulk of it blaming the GOP.

For those who are curious, here’s how they rewrote the part where they initially falsely reported on how it was not yet known if the “political activist” had ties to the right:

While it’s been reported that the activist was involved in the Black Lives Matter and gun-safety movements and there has been no indication yet that he had ties to any right-wing organizations, the shooting comes amid a rise in threats against politicians fueled by increasingly violent rhetoric coming from extremist Republicans.

“… there has been no indication yet that he had ties to any right-wing organizations” though he’s a prominent BLM activist and a proponent of gun control? You’ve got to be kidding me with this garbage spin from the Sun.

While some might be willing to give the Sun the benefit of the doubt for leaving out key information from their original editorial about the shooting, I won’t. For starters, information about Brown was easily accessible via a simple Google search.

Plus, as we saw throughout 2020 and 2021, the mainstream media (and their allies in the Democrat party) routinely goes out of their way to whitewash and sugarcoat violence from the left, with some – like CNN’s Don Lemon – even trying to justify it by saying that it was for a good cause or whatever.

Even today, we see high-profile media figures attempting to downplay the extensive and record-breaking property damage (not to mention the violent assaults and murders) caused by the BLM riots. Take, for instance, this hot take from New York Times columnist Paul Krugman:

I know that the indoctrinated won’t believe this; no amount of evidence will convince them that downtown NYC wasn’t burned down by BLM mobs. But the rest of us should be clear about what did and didn’t happen 4/

Just straight-up gaslighting. And yes, it’s absolutely (and frighteningly) deliberate that they want to make people forget the violent and deadly BLM riots of 2020 didn’t happen.

Maybe “the Vegas Gaslight” needs to do some homework since the degenerate cut his teeth on anti-gun propaganda. Proof again liberals have no intention of debate.

Perhaps the LV Sun is simply shifting its business model to compete with the Babylon Bee?

“I know that the indoctrinated won’t believe this; no amount of evidence will convince them that downtown NYC wasn’t burned down by BLM mobs.”

Why did you pick NYC, Krugman? Instead of, say, Tampa, Phoenix, Scranton, Boise, or Salt Lake City, all of which also weren’t burned down by BLM mobs?

Try Saskatoon next time, Paul. Saskatoon is always good for a giggle.

While some might be willing to give the Sun the benefit of the doubt for leaving out key information from their original editorial about the shooting, I won’t. For starters, information about Brown was easily accessible via a simple Google search.

Plus, as we saw throughout 2020 and 2021, the mainstream media (and their allies in the Democrat party) routinely goes out of their way to whitewash and sugarcoat violence from the left,

Plus, just play the odds. The overwhelming majority of political violence in the USA comes from the Democrat Party and the left, and has done for at least most of the last century.

As Sarah Palin would say, “You’re over the bullseye with that one.”

At least The Sun didn’t blame the gun. /s

This reminds me of how Hitler blamed other countries (Czechoslovskia, Poland, Russia) for the need to invade them. This is projection, just like Hitler’s, that is beyond belief. Leftists do that very well.

Here here! Our side is a gang of invertebrates.

So sad about the Las Vegas Sun. They used to carry one of the most conservative (actually libertarian) columnists in the country before he retired. Now, they’re just a hack blue city rag serving a majority red state, like the Arizona Republic.

You’re right on target with that one Henry.

Threats of violence? Lets talk about actual violent actions and see how those stack up.

Such as Republican Congressman Steve Scalise ACTUALLY being shot by a Bernie freak in 2017.

Or have a look at a list of the leftist violence in 2020 –
https://www.conservapedia.com/Left-wing_violence_in_the_Trump_era_(2020)

You are going to have to cite a better source. Its a known conspiracy theorist site and completely detached from reality

Feel free to contest any item on their list, but what you think you “know” matters only to you.

Well, why not? Is this any less believable than “Biden* got 81 million legitimate votes”?

Except he did get 81 million votes, he was going for the Trump hating votes.

Nobody voted for Biden they voted against Trump, and there has never been an allegation in a court of law that Biden’s votes weren’t legitimate.

You’ve hit the nail on the head. Biden was only marginally better than Clinton and that’s a low bar. It was absolutely a referendum on Trumps 4 years.

There have been plenty of allegations in courts of law of voter fraud in Biden’s so-called win. What you may mean to say is that the courts have refused to hear the evidence proving the fraud, including more votes than registered voters, thousands of “votes” from people supposedly over 124 years old, dead folks voting, ballot “drop boxes” being stuffed in the dead of night, etc.. Some day an honest court will allow the truth to be told.

Congratulations on regurgitating lies, we don’t get enough of that from the left we need the right to regurgitate lies that help Joe Biden win elections.

EVERY GOD DAMNED LAWSUIT BROUGHT WAS HEARD, a judge dismissing a case with a written opinion has heard it.

So stop with that god damned lie.

Second Trump never once brought an allegation of voter fraud into a court of law, so said RUDY GIULIANI TO A JUDGE.

If you want to keep suppressing the Republican Vote in elections with this garbage keep helping Democrats.

Take a deep breath, Danny. You are not going to change anyone’s mind, and you blowing a gasket isn’t going to help anything (says she who frequently blows gaskets and knows of what she speaks :P).

Voter suppression is very real and a concern worthy of attention, but people are going to make up their own minds. Or they already have. Anyway, we can’t make people go vote, and frankly, the ones burbling about such things as the “uniparty” and every election being rigged and therefore unwinnable for the GOP (those two ideas don’t even work together, but don’t bother pointing out how illogical it is) probably will vote for some third party or write in their dog’s name. Let it go 🙂

There’s good reason to believe there was massive fraud, however:

This has never happened, in any election in the USA in living memory, and anyone who repeats such a claim is a liar or an idiot who should be ignored.

thousands of “votes” from people supposedly over 124 years old,

I think you mean 120 years old, and the explanation for that is very simple: the date of birth on whichever record these reports came from was left blank, so it was entered as Jan-1-1900.

If the r party is able to convince an anti 2nd amendment, BLM member, community activist and budding leftist journalist to get a gun ……..you know that the d party is looking at a wipe out in Nov. That’s some sales pitch.

Someone I follow on Twitter (can’t remember who) pointed out that the publisher of the paper, Brian Greenspun, was the college roommate of…Bill Clinton….because of course he was.

The left attacks at all times with anything at hand.

That’s because global warming, or white nationalist insurrection, or systemic racism, or because shut up.

You guys will be shocked to learn that there is zero mention of Brown’s association with and support of the Black Hebrew Israelites from any of the local media. They wouldn’t want to besmirch the reputation of a future saint of Burn Loot Murder.

The assailant was a BLM supporter and activist not a white supremacist !