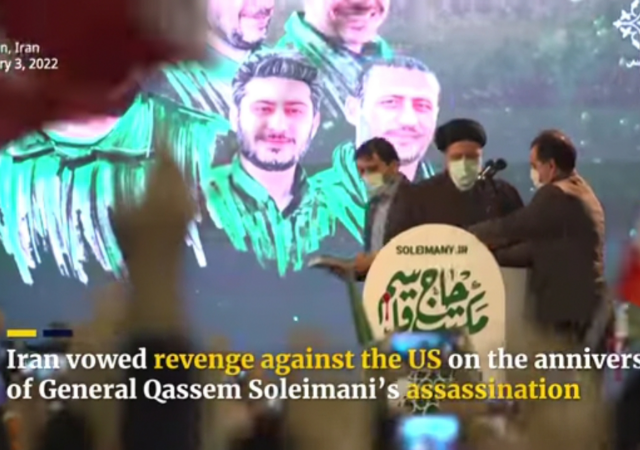 Iran seeks to prosecute 127 people from nine countries for the killing of Qassem Soleimani, the head of the regime’s foreign terrorist arm, who was eliminated in a U.S. drone strike ordered by President Donald Trump years ago.

“The Islamic Republic has sent 11 letters to nine different countries requesting measures to be made against the suspected culprits, according to Iranian judiciary spokesman Zabihollah Khodayian,” the Jerusalem Post reported citing the Iranian state media.

The media reports did not identify the individuals sought by Iran. The news comes a day after the Iranian president demanded former U.S. President Trump and ex-Secretary of State Mike Pompeo be put on trial for his terror chief’s killing.

Iranian President Ebrahim Raisi called upon Muslims to take revenge if the former U.S. president and his aides as not judged according to Islamic law. “If Trump and Pompeo are not tried in a fair court for the criminal act of assassinating General Soleimani, Muslims will take our martyr’s revenge,” Raisi declared on Monday, marking the terror mastermind’s second death anniversary.

Iran said Wednesday it intends to prosecute 127 people for alleged involvement or cooperation with the assassination of its Quds Force chief Qassem Soleimani two years ago by the US administration of Donald Trump.

According to Fars News, which is run by the country’s Islamic Revolutionary Guard Corps, a judiciary spokesperson said the country sent 11 letters to nine countries, asking them to take measures against the alleged culprits.

The spokesperson also said Iran and Iraq signed a memorandum of understanding related to the prosecutions. Soleimani and his Iraqi lieutenant were assassinated in a US drone strike at Baghdad airport on January 3, 2020.

The report did not provide details on who were among the 127 individuals.

Soleimani headed the Islamic Revolutionary Guard Corps-Quds Force, a U.S.-designated foreign terrorist organization. He was responsible for killing hundreds of U.S. military personnel in Iraq and plotted an imminent attack on American diplomats and troops when President Trump ordered the strike, the Pentagon confirmed.

This is not the only path Iran is following to avenge the killing of its top-most terror operative. The IRGC has devised several failed terrorist attacks aimed at U.S. and Israeli nationals in recent months.

In October 2021, an Iranian plot to kill Israeli tourists and businessmen in Cyprus was thwarted by local law enforcement. Later in November, the Israeli intelligence agency Mossad foiled an IRGC plot against Jews and Israelis in at least three African countries.

A similar attempt was also averted in Columbia. Besides Israeli nationals, “members of a US delegation in [Bogota] were also under surveillance by the terror group” Hezbollah, The Times of Israel reported in November.

The IRGC was also involved in the bombing outside the Israeli embassy in New Delhi, which took place in February 2021, Indian investigators confirmed. A “letter found near the scene of the explosion spoke of the deaths of ‘martyrs’ Qassem Soleimani” and others, media reports said.

These terror plots are part of the worldwide jihad, or Muslim Holy War, declared by Ayatollah Khamenei to avenge the killing of Soleimani. Apart from being the ruler of Iran, Khamenei is the spiritual leader of some 200 million Shia Muslims across the world. His regime also arms and finances prominent Shia and Sunni terrorist groups across the Muslim world, including Lebanese Hezbollah, Gaza-based Hamas, and Yemini Houthi-Ansar Allah militia.

“Iran President: Trump Must Be Punished With Death for Soleimani Killing”

Garland and DOJ will be leading the way..

I trust Putin more than I trust Merrick Garland. What a sinister scumbag.

“Our” DoJ is more likely than not diligently working up the Extradition approval paperwork to provide a standardized format to extradite any and all Trump administration officials and any Trump sympathizers.

Influential Dems most likely are recruiting thousands of Trump-obsessed FBI and DOJ agents, communists, socialists, statists, victicrats, BLM & Antifa terrorists, “anti-racist” racists, disaffected college students, unemployed college grads, and celebrities, all joined by one objective: a murderous jihad against Trump and anyone who agrees with him. They relish the idea of Trump being executed by their Iraqi and Iranian brothers in arms, in or outside the US.

“Iranian President Ebrahim Raisi called upon Muslims to take revenge if the former U.S. president and his aides as not judged according to Islamic law.”

Blow it out your *ss, you poltroon.

How about if Israel tries you under Mosaic law, from Jerusalem?

A Jericho missile can try Raisi in about ten minutes, and carry out the sentence, if he ever acts on his government’s violent threats to Israel. As Harry Callahan said in Sudden Impact, “Be careful where the dog poops you” and “poops” wasn’t the word he used.

Can I be one of them?

I really did want in on it, but I had been retired for almost 10 years.

Ebrahim Raisi needs to be put down.

Kill, kill, kill. That’s the solution to all their problems. Yes, that’ll work.
.

“Iranian President Ebrahim Raisi called upon Muslims to take revenge if the former U.S. president and his aides as not judged according to Islamic law. “

Raisi is therefore peddling the Islamophobic stereotype that all Muslims are terrorists and will wage domestic terrorism in the US if he tells them to do it. This is while, at the same time, his so-called government defines Sunni Muslims as infidels.

When is CAIR going to condemn this Islamophobic statement from Raisi, by the way? I condemn it unequivocally.

As great as President Reagan was, this was an area where he failed! He should have gone back after the hostages were freed and leveled the place!

“Islamic law”…
Something of an oxymoron, methinks…