Iranian President Ebrahim Raisi: “If Trump and Pompeo are not tried … Muslims will take our martyr’s revenge.” 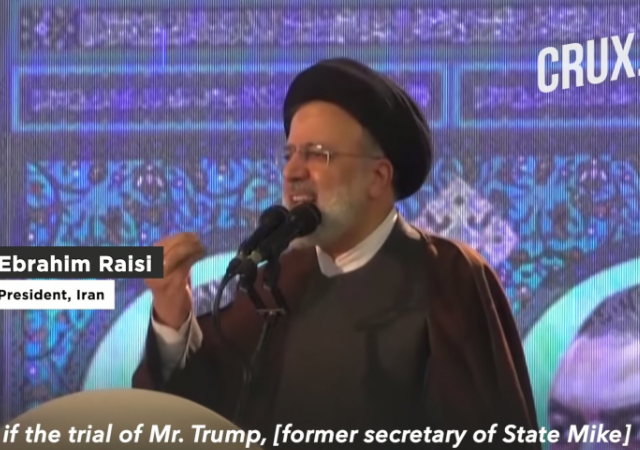 Iran has vowed ‘revenge’ if former U.S. President Donald Trump and ex-Secretary of State Mike Pompeo are not put on trial for the 2020 drone strike that killed its top terrorist operative Qassem Soleimani.

“If Trump and Pompeo are not tried in a fair court for the criminal act of assassinating General Soleimani, Muslims will take our martyr’s revenge,” Raisi declared on Monday.

Soleimani headed the Islamic Revolutionary Guard Corps-Quds Force, a U.S.-designated foreign terrorist organization. He was killed in a U.S. drone strike near Baghdad airport on January 3, 2020.

Qasem Soleimani was actively engaged in plotting against America. We took lawful military action to make sure that no Americans were killed. American leadership now has the responsibility to keep every American safe against the threat from Iran. pic.twitter.com/HasnBzEE7m

According to the U.S. Defense Department, Soleimani was directly responsible for killing hundreds of American troops in Iraq. The drone strike was ordered by President Trump when Soleimani was “actively developing plans to attack American diplomats and service members in Iraq and throughout the region,” the Pentagon confirmed.

Iran and groups allied with it in Iraq have been holding events to honour Soleimani, the commander of the Quds Force, the overseas arm of the elite Revolutionary Guards.

He was killed in Iraq in a drone strike on Jan. 3, 2020, ordered by then president Trump.

“If Trump and (former secretary of state Mike) Pompeo are not tried in a fair court for the criminal act of assassinating General Soleimani, Muslims will take our martyr’s revenge,” Raisi said in a televised speech on Monday.

On Sunday, Iran urged the U.N. Security Council in a letter to hold the United States and Israel, which Tehran says was also involved in the killing, to account, according to Iranian media.

On Monday, pro-Iranian demonstrators in Baghdad trampled on U.S. and Israeli flags to vent their anger over the killing of their beloved terrorist mastermind. “Chanting anti-American slogans, hundreds of people rallied in the Iraqi capital Saturday to mark the anniversary,” The Times of Israel reported. “American and Israeli flags were strewn on the ground as protestors trampled on them.”

The Iranian president, who wants President Trump to face Islamic “justice,” is known to his people as Ebrahim “The Butcher” Raisi for ordering the mass execution of thousands of dissidents. He launched his political career as a member of the four-men “Death Committee,” which sent at least five thousand Iranians to their deaths in the 1980s. His victims included women and children.

While the Iranian regime demands the head of the former U.S. president, the Biden White House is busy coaxing the Mullahs to restore the Obama-era nuclear deal. The Shia-Islamic regime appears to be biding time, as it enriches near-weapons grade uranium and tests new nuclear-capable missiles.

“Iran President: Trump Must Be Punished With Death for Soleimani Killing”

LOL…never underestimate the ability of the Iranian terror state to completely jump the shark and go batshit insane.

Even the swamp wouldn’t want to do this. The only thing that sucks about this situation is that do-nothing Biden will live up to his name.

There are *three* primary places in the world right now where the US doing nothing is going to get a lot of people killed:
–Iran, where no matter what Quds does, there will be no US response
–Ukraine, where Putin believes he can just drive across the country and take it over in a day or two without any significant trouble since Europe won’t stand up as long as he holds their gas supply.
–Taiwan, which has reached a point where China is actually thinking about taking them back over by force.

I’m leaving out North Korea, which has either been remarkably quiet or the press is just avoiding any stories that might make the current administration look bad.

My guess on NK

Current admin is not even watchdogging them or suppressing any intelligence info about their actions, probably at the behest of China.

No news is not good news on that country.

my thoughts on NorKs? Have you seen recent pictures of Kim? He has lost about half his body weight. Either someone managed to convince him to lose weight (you wanna be the one to have that conversation with HIM?) or things are A LOT worse there than anyone knows.

“or things are A LOT worse”

I would not be upset by that in the least.

There is no way that he is losing weight because NK is doing poorly. You need to remember that he has the whole country to cater to his needs.

Even the swamp wouldn’t want to do this. The only thing that sucks about this situation is that do-nothing Biden will live up to his name.

Wanna bet? I’m sure there are even more batshit insane democrats in Congress and elsewhere that would have no compunctions in handing a U.S. citizen over to the mullahs in Tehran. Especially right before an election where it’s generally held that they’re going to lose and lose big no matter what they do.

I’m thinking the same, but if they set that precedent the result may not go so well for the Democrats.

Enter Omicron! Lock everyone down and have massive mail-in voting and you have 2020 2.0!!

It’s not jumping the shark: this lunatic is an ally of Pelosi.

Iranian Fathead wants a fatwa. Don’t mess with the bear you moron.

For future reference, There won’t always be a liberal in DC.

Hopefully, memory of how bad Biden’s puppet masters have mucked things up will lead to a decade or two of Dem timeout.

If Trump and Pompeo were put on trial they would kill someone to celebrate.

Killing people is what the Iranian government does. It’s how they got their jobs. I imagine it’s part of the application.

The Iranian regime has read the room….perhaps correctly. At least a third of the Democrat caucus – and likely scores of key Biden Administration officials – would put Trump and Pompeo on trial for offing Soleimani if they could figure out how to do it.

The Iranian theological junta has at least one thing in common with American progressive: They both hate America and REALLY hate anyone that actually defends it.

They won’t put them on trial because they are complicit in a lot of deep state trial-worthy actions themselves.

That would be like making the myth of Guillotin true (myth: the man that invented it ended up beheaded by it)

Put Trump and Pompeo on trial? Hell, there are probably scores of key Biden administration officials that would gift wrap both up in ribbons and send them directly to the mullahs in Tehran if they thought that would change in the outcome of the 2022 midterm elections. And that’s a fact.

That’s a fair point, but that if is not really based in reality.

Those treasonous actions would only ignite those that are already loony left enough to support such foolishness, so there’s really no benefit. The cost on the other hand could loom very large for them when they are out of favor.

That’s why there’s all the hullabaloo over OMICRON! Lock everyone down and institute mail-in voting like the last “election” and voila! You have 2020 2.0!!!!

Do they have another plywood aircraft carrier that we don’t know about?

That was Iran who built a fake aircraft carrier for propaganda.

That would result in a war.

I think Iran needs to have a bad nuclear accident.

The Iranian leaders don’t lose anything making these wild statements. One of their crazy followers may try something here in the USA. It could be one of our crazy liberals. They are known for their violence.

The audacity of Trump to stop Obama’s Iraq War 2.0 through the scalpel-precision abortion of the principal Iranian protagonist.

It’s true what they say about puppy dogs barking at the moon. Pointless and inconsequential, just like the Iranian moooolahs.

Says, “We will no longer accept gold shipments from US in the middle of the night. That will teach them Yankees.”

I dunno. Iran thinks it is going to win by handing Biden a “briar patch.”

“They say unless I prosecute Trump they’ll cause trouble? Fine with me!”

If a competent Democrat were in the White House, I’d actually be worrying.

Maybe they’d be satisfied if the Democrats just impeached Trump while they still hold the House?

Maybe they’d be satisfied if we sent Kamala Harris to Iran to be of service to their president.

Sending them refuse like Kamala Harris would be an international incident and grounds for war with the U.S. Does even Iran deserve THAT? 🤣🤣🤣😁

IF these derelict mullahs order anything, AND I MEAN anything against the USA we should SLAP them AND the Buildings where they reside…WITH FORCE beyond their imagination. OR just wait till……D.J.TRUMP get back in office

If we sent a missile to Iran every time they threatened us, there wouldn’t be any Iran left. But, alas, that won’t happen, since Persia has to exist to meet its fate in Ezekiel 39.