“Members of a US delegation in the city were also under surveillance by the terror group.” 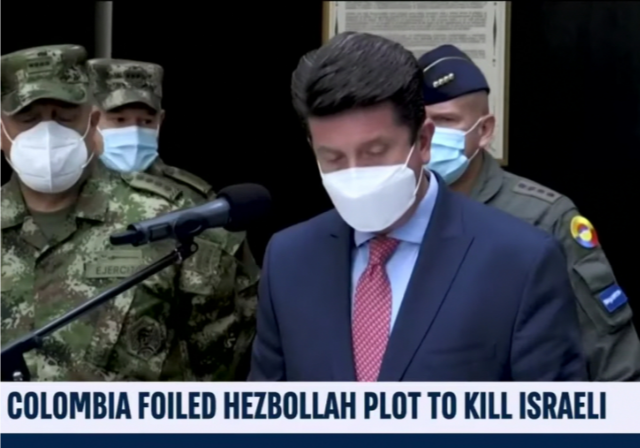 The authorities in Colombia have foiled an Iranian plot to murder a former Israeli diplomat, the South American newspaper El Tiempo reported Sunday. The Colombian defense minister said that two Hezbollah operatives were arrested on charges of planning to assassinate a retired Israeli embassy staffer and ex-Mossad employee.

The busted Hezbollah terrorist cell also had visiting U.S. officials in its crosshairs. The “members of a US delegation in the city [Colombian capital Bogota] were also under surveillance by the terror group,” the Israeli news website added.

The latest terror plot to avenge Soleimani’s death is in line with the threats made by Iran’s new President Ebrahim Raisi before taking office. In January 2020, Raisi — the then-Iranian judiciary chief — warned that former U.S. President Trump and members of his administration would “not be safe on earth” as the regime marked Soleimani’s first death anniversary.

“Do not presume that someone, as the president of America, who appeared as a murderer or ordered a murder, may be immune from justice being carried out. Never,” Raisi declared at that time. “Those who had a role in this assassination and crime will not be safe on Earth.”

Members of the militant group Hezbollah monitored and targeted several notable officials in Colombia, including a former Israeli intelligence officer, the country’s media reported on Sunday.

Colombian newspaper El Tiempo explained on Sunday that an ex-intelligence operative, who was previously on a team of Israeli diplomats in Colombia, recognized he was being spied on by Hezbollah members in the country.

He received notice from the Mossad and other foreign operatives that the militant faction was monitoring his daily activities.

Colombia’s authorities asserted certain indicators signaled to investigators that the former officer was being targeted by Hezbollah for an assassination, according to The Jerusalem Post.

While the report does not specify when the incident occurred, it details Colombia’s Defense Minister Diego Molano revealed on Sunday that two members of the militant Islamist faction were arrested in the country two months ago, according to Haaretz.

The pair were taken into police custody and were later deported from the country for conspiring to commit a “criminal act,” Molano told El Tiempo.

Hezbollah presence within Colombia’s borders is of serious concern to Bogota’s leadership, and the government is taking action to remove the faction’s influence.

“For us, Hezbollah is a terrorist group,” Colombia’s President Ivan Duque said during an interview with i24NEWS on Wednesday.

“Where we see Hezbollah activities in our territory we act fast and strong, and in fact, we have captured members who are allegedly working for Hezbollah, seeking targets for terrorist acts in our country.”

In January 2020, the Iranian regime and its proxy terrorist groups declared ‘jihad,’ or the Islamic holy war, on the U.S. to avenge Soleimani, who headed Iran’s foreign terrorist arm, the Quds Force.

As Quds Force chief, Soleimani was responsible for killing hundreds of American servicemen and women in Iraq, the U.S. Defense Department confirmed. At the time of the attack, he was “actively developing plans to attack American diplomats and service members in Iraq and throughout the region,” the Pentagon confirmed following the drone strike.

“All Enemies should know that the jihad of resistance will continue with a doubled motivation, and a definite victory awaits the fighters in the holy war,” Khamenei, who is also the “spiritual leader” of estimated 200 million Shia Muslims across the world, declared in a January 2020 address to the nation.

Earlier this month, Israeli intelligence agency Mossad foiled an Iranian plot to carry out terrorist attacks against Jews and Israelis in at least three African countries. The five suspects nabbed by the African security services were trained in Lebanon, the operational base of Hezbollah.

Last month, police in Cyprus thwarted a similar Iranian plot to murder Israeli tourists and businessmen. The authorities in the Mediterranean Island nation arrested an armed assassin who was preparing to target a building that housed Israeli businesses in the Cypriot capital Nicosia.

Iran and people in Palestine have constantly advocated of wholesale slaughter to Jews, is there any reason that they should not be held to the same standard? They are deranged and incurable.

Yes, there is. What you’re suggesting boils down to “He killed my grandmother, so it’s right for me to kill his grandmother”.

All’s fair in lust and abortion… if they can get away with it.

Thanks, Vijeta, for another good report–with context.

Another example that the bad guys always have the advantage. They get to pick the time and place, and the good guys are left to figure those out. Further, if the bad guys succeed, they get what they wanted-dead people and terror. If the bad guys’ plan is thwarted, all they get is sent home-and still accomplish afflicting terror.

The only good Islamic terrorist is… ( hint -if you ever have watched The Searchers”, the rest of the post is east to complete).

Reading of the Koran and nature of the founder, pretty much sums up what is wrong with Islam. It has pretty much the same significance as Marxism. Both are dead ends.