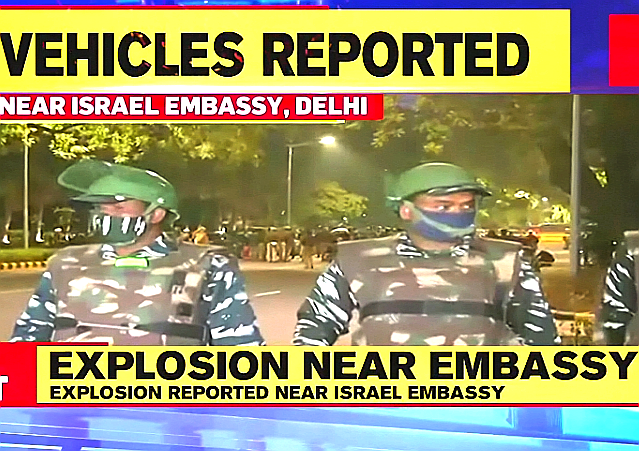 India has confirmed Iran’s involvement in the blast outside the Israeli embassy in New Delhi five weeks ago.

The month-long probe concluded by New Delhi verified initial Israeli assertions that Tehran was behind the terrorist attack on its diplomatic mission. The Islamic Revolutionary Guard Corps’s (IRGC) Al Quds Force deployed a local Shia-Islamist terror cell to carry of the remote detonation outside the Israeli embassy, media reports said.

More than a month after an improvised explosive device (IED) went off outside the Israel embassy in Delhi late January, India’s central counterterrorism agencies have drawn up a list of suspects, with their investigations concluding that the Iranian Quds force was behind the terror plot but that the bomb was planted by a local Indian Shia module, according to people aware of the developments.

(…) [T]he counterterror agencies are clear that the blast was part of the asymmetric warfare campaign being carried out by Iran’s Islamic Revolutionary Guard Corps against Israel, they added. “That the bomb was not of high intensity, with no human targets in mind was perhaps because the Iranians did not want to run afoul of a friendly nation like India. But the message was clear and the threat is real,” said a counterterror expert who asked not to be identified and who is now keeping an eye on the Iranian connection and the people associated with it.

A low-intensity device exploded outside the Israel embassy on January 29. Counterterrorism agencies found that the explosive device used was not crude as it appeared to be. Instead, it was a remote-controlled device triggered off by a bomber using line of sight.

“By the grace and help of Almighty Allah, soldiers of Jaish-Ul-Hind were able to infiltrate a high-security area in Delhi and carry out an IED attack.” the message reportedly posted by the Jaish-Ul-Hind said. “This Allah willing is the beginning of a series of attacks that would target major Indian cities and payback in kind to the atrocities committed by the Indian state.”

The terrorist attack was an apparent attempt to mark the first death anniversary of Qassem Soleimani, the head of the Al Quds Force and a wanted-terrorist. President Donald Trump eliminated him in a Baghdad drone strike.

A “letter found near the scene of the explosion spoke of the deaths of ‘martyrs’ Qassem Soleimani (…) and Mohsen Fakhrizadeh, the architect of Iran’s nuclear program, killed in a November 2020 attack Tehran has blamed on Israel,” The Times of Israel reported shortly after the terror incident.

The terrorist attack on the Israeli mission in New Delhi also coincided with the 29th anniversary of Israel and India establishing full diplomatic relations.

“We believe it’s not a coincidence that the attack happened on January 29, the anniversary of our full diplomatic relations,” Israel’s Ambassador to India Ron Malka said following the attack.

Since President Joe Biden took office, Iran has intensified its terror campaign against the Jewish State. Two weeks ago, Iran attacked an Israeli cargo ship in the Gulf of Oman. The Israeli government confirmed Iran caused the massive oil spill that contaminated most of the Israeli coastline in mid-January, considered the worst environmental disaster in the country’s modern history.

Gee, thankfully Pres Biden just agreed to release 3 billion of Iran’s frozen assets in Omar, Iraq and S. Korea. I mean, being a state sponsor of terrorism must be expensive at they surely need the cash!

Don’t forget the billions Obama (along with Biden, since the law school/political plagiarizer/vaccination plan plagiarizer is plagiarizing the “credit” for everything that he can while VP) smuggled in palletized bales of unmarked cash aboard unmarked aircraft.

Which of course means we’re actually the world’s largest state sponsor of terrorism since we’re the mullahcracy’s ATM.

Providing material support to terrorist organizations is a federal crime. There is no exemption for officials violating the law (and the Obama admin did violate the law; ask me how!”).

But when the leftists get they’re way you and I will be arrested for ever contributing to conservative causes or candidates.

Israel needs to act, they must take out Iran

Israel has no allies right now…they can only act if cornered directly in their own borders.

Yes, they do. The Persians’ traditional ethnic enemies, the Arabs. And then the Sunnis and Shiites have always been at each others throats (anyone who ever said ISIS/IS can’t be Islamic because they killed other Muslims is either a complete idiot or a brazen liar because Muslims have been killing the “wrong” kind of Muslims since the first “rightly guided” Caliph Abu Bakr – full name Abu Bakr Abdullah ibn Uthman; kind of like Cher or Madonna his full name is rarely used – started his “Wars of Apostasy” which he kicked off immediately after Muhammad died; you think the guy with a PhD in Islamic theology from Baghdad U. whose first task on the road to continuing the 7th century Arab conquests was to cleanse the ummah of the “wrong” kind of Muslims just picked the nom du guerre “Abu Bakr al Baghdadi” out of a hat?). As the Muslims saying goes, “Me against my brother, my brother and I against my cousin.”

Arabs, particularly Muslim Arabs, are reliable as allies. They reliably will ally with their second worst enemy against their worst enemy according to shifting circumstances (ever read histories of the Crusader states in the Levant) and then reliable turn on them again as the situation changes.

Hopefully Israel isn’t as suicidal as we Americans are. During the Cold War it was the job of the Soviet Ambassador to the U.S. to assure the Kremlin that, no, we weren’t playing multi-dimensional chess whenever we adopted a plan to score own-goals against ourselves (sort of like the running gag on Gilligan’s island whenever some minor villain discovered the castaways and became convinced that Gilligan had to be some super genius because nobody could be that stupid). We really were slitting our own throats. Just like we did due to roughly half the country voting for mass suicide because their pathological hatred of Trump demanded it (that explains how Andrew “Granny killer” Cuomo was awarded his Emmy).

And, no, as the news dribbles out we’ll learn it wasn’t TDS alone that put Biden over the top (The Georgia Board of elections referred 35 cases of voter fraud to the AG for prosecution, a judge in Mississippi just ordered an entirely new election in one ward because 78 percent of the mail-in ballots were fraudulent which is why developed counties of which we used to be one never did and except for us and still don’t allow it, Never Trumper RINOs are now in the embarrassing position of opposing H.R.1 which institutionalizes voter fraud when the “by any means necessary” Quisling wing of the GOP was all for it to get Trump out of office, etc.)

The Dems did steal the election, hence the hysterical demands to establish the narrative early before the evidence comes out (just like the race hustlers have to establish the “systemic racism/racist cops kill poor, innocent, unarmed black guy” before the facts come out that he was a violent career criminal, and oh by the way in many cases was actually armed or trying to steal a cop’s side arm).

I’m surprised this book has seen the light of day.

“The Deep Rig: How Election Fraud Cost Donald J. Trump the White House, By a Man Who did not Vote for Him: (or what to send friends who ask, “Why do you doubt the integrity of Election 2020?”)”

But I digress. The Kingdom of Jerusalem and other Crusader states, collectively known as “Outre Mer” or “across the waters” in French, lasted nearly two hundred years (1099 – 1291) and would have lasted a hell of a lot longer if it hadn’t been for one big problem; all those damned Crusades after the successful First Crusade declared by the Pope drawing all those damned Europeans Crusaders led by all those damned glory-seeking Holy Roman Emperors and lesser kings and princes.

Because the Franks, Italians, Catalans, and sprinkling of the other odd European here and there, who settled there after the First Crusade and raised subsequent generations who had never set foot in Europe learned how politics worked in the M.E. And they essentially just became another polity that knew how to operate the levers. But the Crusaders from Europe kept coming, who didn’t know a damned thing about Islamic politics (and didn’t care to learn) or for that matter the weather and terrain.

Israel has the advantage of not having that problem.

Thank Trump for normalizing relations between Israel and everyone in the region who is quite freaking sick of Iran being the ahole that ruins the neighborhood for everyone else.

That sounds a lot like the neighborhood I grew up in. I was lucky, got out before it became a complete shit hole.

Biden will whistle Dixie on it.

I hope he does whistle Dixie. Then cancel culture will topple him like a statue of a confederate general.

Of course, some might argue then we’ll get Kamala Harris, who is worse. But so what? Does anyone think Biden is in charge of anything? He’s not in charge of his own drool guard; somebody has to put it on and take it off so he can appear in public. He has to be spoon fed the pureed chicken & gravy and pureed vegetable medley & potato dishes they serve him for lunch just as he has to be spoon fed his rigidly choreographed speeches (and he still goes off the rails in both cases).

Whoever is Hidin’ Biden’s puppeteer will be Harris’, too, so the only thing I care about is the entertainment value (and hopefully some self-inflicted political damage) of watching the Dems tear themselves apart as soon as they get done tearing themselves apart over “Killer” Cuomo.

Good name for a pro-wrestler. Bad name for a governor. Especially when you can make the case he and his enablers are even more guilty of involuntary manslaughter than former governor Snyder and his crew were over the Flint water debacle.

Coming right on top of attacks on Israeli merchant ships, and, the horrific, utterly despicable act of terrorism/war that was the Iranian-directed oil spill attack on Israel’s environment and beaches.

I’m sure we are all appropriately shocked that Iran’s increasingly brazen and unabashed belligerence is coinciding with the installation of an utterly weak, emasculated, tottering, feeble, dim-witted and feckless puppet, in Chairman “Big Guy” Xi-den, a senile fool who has committed to following the vile Obama’s naive, vanity-driven, destructive and foolish foreign policy of total appeasement of, and, obsequious deference to, Iran’s despots and other assorted belligerent actors in the global rogues’ gallery.

I still think that knock out Iran’s water revivors, their hydro electric and high tension grid as a warm up exercise. Then the would have more pressing matters than terror.

Maybe my Indian friends will just nuke the terror state of Iran and be done with it.

Five weeks ago. Heh. What event did that follow?

Israel is on the ropes: President Susan Rice will surely not resupply Israel’s spent munitioms if it attacks Iran.

Stupid liberal Jews: are you proud of your work?

Not supplying Israel will only lead to their developing their own weapons.

I dare say Israel has become more self reliant these days TFR. It already knows American support is fickle, especially now there one true Presidential ally is no longer around.

Empowered by the Xiden/embHarris administration there will no doubt be much more of this.