Ayatollah Khamenei: “The jihad of resistance will continue with a doubled motivation, and a definite victory awaits the fighters in the holy war.” 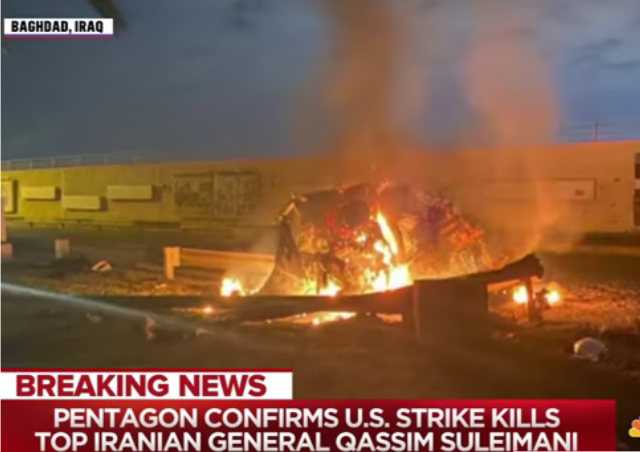 “All Enemies should know that the jihad of resistance will continue with a doubled motivation, and a definite victory awaits the fighters in the holy war,” Khamenei said in a televised statement.

In his Friday’s sermon, Khamenei vowed revenge for the slain terrorist, saying, “this is the time to clear the region from these insidious beasts.” The chants of “Death to America” followed the weekly Islamic prayer.

Hassan Nasrallah, the leader of Iran-backed terrorist group Hizbollah, which operates in Lebanon, also joined in the Iranian call to jihad, urging “all resistance fighters worldwide” to avenge the killing of the top Iranian commander.

Soleimani, considered to be one of the most powerful figures in the Iranian regime, was the chief architect of Iran’s network of terrorist groups across the Middle East. The head of Quds Force, the elite wing of Iran’s Islamic Revolutionary Guard Corps, was responsible for the killing of hundreds of American servicemen and women in Iraq, the U.S. Defense Department confirmed. At the time of the attack, he was “actively developing plans to attack American diplomats and service members in Iraq and throughout the region,” the Pentagon disclosed.

Soleimani’s Quds Force is tasked with carrying out terrorist operations beyond Iran’s borders, propping up pro-Iran regimes, and building proxy terrorist militia. For two decades, he was in charge of Iran’s foreign intelligence and terrorist operations. “The killing of Qassim Soleimani is one of the biggest developments in the Middle East for decades – it far eclipses the deaths of Bin Laden or Baghdadi in terms of strategic significance and implications,” the UK newspaper Telegraph noted.

IRGC Spokesman Gen. Sharif Bursts into Tears, Adds: Before Long, the Joy of the Americans and Zionists over the Killing of Soleimani Will Turn into Grief pic.twitter.com/PgwlJKRHdw

The Russian Foreign Ministry offered glowing praise for the slain terrorist: “Soleimani served the cause of protecting Iran’s national interests with devotion. We express our sincere condolences to the Iranian people.” His killing “was an adventurist step that will increase tensions throughout the region,” the Russian news agencies RIA Novosti and TASS reported citing Foreign Ministry sources.

The response from the EU and European leaders was muted, with Germany and France calling for “easing” of the tensions and “deescalating” the situation.

The first European country to react to the killing of Soleimani is France. The country’s deputy minister for foreign affairs, Amelie de Montchalin said on RTL radio, “we are waking up to a more dangerous world. Military escalations are always dangerous.” She added that “escalation is underway.”

Montchalin indicated that urgent reconciliation efforts are being launched behind the scenes. French President Emmanuel Macron and his foreign minister were reaching out to “all the actors in the region,” she said.

The British government is urging caution, saying “further conflict is in none of our interests.””

The statement does not explicitly endorse or condemn the actions of the U.S., a major British ally.

Germany says the situation in the Middle East has reached ” “a dangerous escalation point” and that conflicts in the region can only be resolved diplomatically.

German government spokeswoman Ulrike Demmer characterised the U.S. move as “a reaction to a “whole series of military provocations for which Iran bears responsibility,” pointing to attacks on tankers and a Saudi oil facility.

The drone strike that killed Soleimani also took out Abu Mahdi al-Muhandis, the commander of Iran-backed Kataeb Hezbollah, a U.S.-designated terrorist group. The terrorist group was behind the storming of the U.S. embassy in Baghdad on Sunday. The terror outfit also carried out a recent rocket attack at a U.S. military base in northern Iraq, killing one American civilian contractor and injuring several soldiers.

Hours after the strike, Iran was busy regrouping its terrorist network in the region. Iranian leader Khamenei appointed Esmail Qaani (Ghaani) as commander of Quds force to replace the slain terrorist.

Well, that’s what they were doing anyway, so… *shrugs*

If the message needs clarification, just keep working our way up the food chain.
Their government is just a bunch of thugs and they only respect direct threats on their lives.
Hopefully this will become apparent to the Iranian rulers/thugs so we can go on to other pressing problems.

That was my first thought too, along with ‘so what is this, double secret jihad?’

In the early morning I watched the aljazeera and its analysis which was American cable channels just repeating Democrat condemnations. At one point Aljazeera interviewed a man in Teheran. The look on his face was one of absolute total shock. I got the feeling that everyone in the Iranian government was feeling the same way.

that’s how all bullies react after they’re punched in the nose.

a definite victory awaits the fighters in the holy war
If you define ‘victory’ as “meeting your virgins in the afterlife”, then yeah.
(Or is that “72 Virginians”?)

They assume all those awaiting virgins are female?

notamemberofanyorganizedpolicital in reply to GWB. | January 3, 2020 at 10:17 am

I’ve read more than once that the original means Raisins.

Personally I think it mean Prunes.

Iran’s Khamenei Taunted Trump Before Soleimani Strike: ‘You Can’t Do Anything’

The Boys in Tehran now know that none of them are safe. Whether it is from over head or from their own streets, they are now worried.

Little rocket man just made a boom boom in his pants.

notamemberofanyorganizedpolicital in reply to walls. | January 3, 2020 at 10:19 am

LOL Thanks for the morning laugh!

Yeah, you and who’s mother?

Bring it on, dipshit.

And all this time I thought they were in a state of perpetual peak outrage. Their national anthem is “Death to the Great Satan!”

Exactly how pissed off can these monkeys get? When does it no longer matter?

Stops mattering when a large number disappear into pink mist, and the others go home because they have “stuff to do”.

I hope the next missile is already inscribed,
“To Ali Khamenei,
with love,
from The Donald.”

At least half of the Iranian people would thank us for freeing them from this dictator.

Delicious appetizers.
Can’t wait to taste the rest of the meal.

Well General Sulu Mangy got blown away. The Iranian mullahs were outraged and pledged eternal jihad. The only deviation from the same old same old here was that the General got disassembled by a Hellfire missile. Otherwise, it’s just more of the same and a rainy day in Tehran. Yawn.

I’ve heard the same thing. That houris means grapes. Some Muslims say that because they are embarrassed. Their problem is that the Quran describes these houris. Err, grapes. These are virgin grapes. Touched by no man or jinn (genie). They have large brown eyes. And large swelling breasts. And the jihadi will marry his grapes

Well alrighty then. A religion I already found sick and demented just got a lot more so.

Can you see the look of shock and horror on the jihadi’s face as Allah says “Good job big guy. Here’s your reward.” Then tosses him a box of Sunkist grapes and THOSE pop out. “BTW you all are married for all eternity” Allah says as he walks away laughing.

notamemberofanyorganizedpolicital in reply to Arminius. | January 3, 2020 at 3:01 pm

Go on! Open your mouth about how there’s nothing the US can do.

Go on. You feeling froggy? Jump!

See how it feels, murderers, to know that you might be next.

From elsewhere:
We’re witnessing the death of the Iran regime and their death throes toward the US. I’ve been following Iran’s involvement in Iraq closely for over a year because I have a significant financial investment there. Iraq is on the cusp of enacting their monetary reforms, which will add value to their currency and allow their markets to open up internationally. It will also provide the HCL law, which pays all Iraqi citizens an oil revenue stipend like Kuwaitis receive. The reforms have been hampered by the Iranian puppets in the Iraqi leadership and parliament, which has perpetuated the ongoing 30% unemployment rate while the corrupt politicians get rich. That’s is the backdrop of the situation, and these are the three most important points to know right now: 1) The vast majority of Iraqis support the US strikes against Iranian militias, who have killed over 500 Iraqi protestors and wounded or kidnapped thousands more. Iraqis have been continuously protesting since October to purge their government of the Iranian puppets who facilitate the theft of their oil revenue, so the militias are trying to suppress them. That’s also why Iraqi political leaders are lashing out at the US — not because of Iraqi sovereignty, but to defend Iranian interests. The protests have so far resulted in new elections laws passing, a special election scheduled, and the resignation of the Iran-backed Prime Minister, Abdul Mahdi, who is in office temporarily until the special election. So when Mahdi criticizes Trump, know that the Iraqi people overwhelmingly oppose Mahdi’s statements. 2) The theft of Iraqi oil revenue is the only lifeline Iran has under the sanctions, which their religious class has admitted is bankrupting them. Iranian citizens in Iran are still in revolt and burning down banks to support the US efforts to suffocate the regime. When the regime is no longer able to pay their military, the regime will fall. It’s getting close. 3) The new election law passed by parliament will discontinue the appointment of Prime Minister candidates by the large Iran-backed political parties, and instead only accept candidates from regional districts (tribes, really), which means the candidates nominated will be anti-Iran and pro US. I predict the next PM will be Abdul-Ghani al-Asadi. All this adds up to REGIME CHANGE IN IRAN. And soon.

Kill the ayatollah next.

I love how Congress thinks they were “bypassed”. This was not a declaration of war, so you aren’t even necessary. Stop trying to take over the executive branch from your legislative seats…stay in your lane, Nancy.

For the last 16 years, democrat controlled congress has been giving power to the president. Apparently, now that its a republican government, 1/2 of 1/3 of our government is upset that the president exeecised those powers.

The ayatollah is upset too.
The terrorist Soleimani started believing his own propaganda and decided to publicly show himself in another country.
What did he expect to happen?