“They vote for their interests, which is preserving whiteness at all costs. When push comes to shove, many white women in this country have historically shoved people of color out of the way,” Daily Beast columnist and CNN/NYT contributor Wajahat Ali raged. 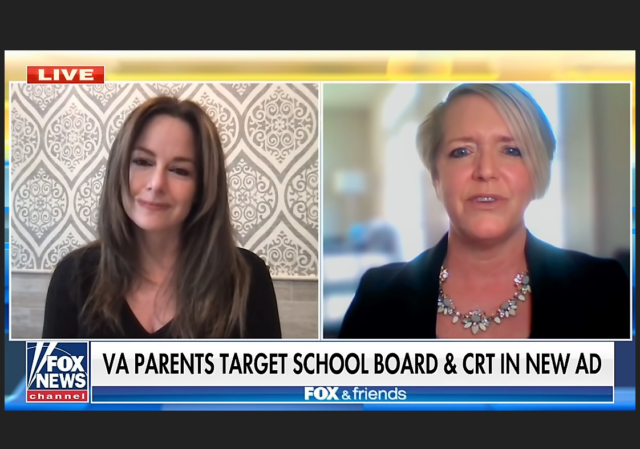 A red wave swept through Virginia Tuesday with the election of Republican gubernatorial nominee Glenn Youngkin, Lt. Gov. nominee Winsome Sears, Attorney Gen. nominee Jason Miyares, and the Republicans who helped take back the House of Delegates. For conservatives across the country, was the political reckoning they’d longed to see happen to Democrats since Joe Biden was declared the winner of the presidential election a year ago.

Conservatives in other southern red states breathed sighs of relief and contentment. In their minds, Virginia was finally a lovely shade of red again, back in the fold – and home where they belonged.

But for so-called “woke” Democrats, a storm was brewing. Understandably, they didn’t feel too good about how things turned out in Virginia, especially considering the state (in particular NoVa Democrats) helped propel Joe Biden to the White House. Predictably, they blamed “whiteness” for their Tuesday drubbing.

Further enraging frustrated leftists who were trying to figure out what went wrong was exit polling showing that white women, in particular, were essential to Youngkin’s victory:

A 15-point swing to the GOP with this group.

That tweet from Kapur, an NBC News political reporter, set off a firestorm of angry denunciations of “#whitewomen” (which trended for a good bit of the day Wednesday on Twitter) from the same progressives who’d previously told us that a woman’s opinion was sacrosanct and thus should never be questioned:

In Virginia, white women swung back towards the GOP by 15 percentage points compared to 2020, h/t @rerutled https://t.co/dw8neoH5EL

Of all the misogynists, #whitewomen are the most confounding.

I'm assuming #whitewomen is trending for all the wrong reasons? Annnnd yup.

Ali spent some 20 or so tweets going off on the people who voted for Youngkin, at times ripping white women and then “whiteness” in general, at one point stating that “whiteness remains undefeated” and “whiteness wins again.”

He further expounded on his thoughts in a Daily Beast piece that was headlined “You Damn Karens Are Killing America”:

It makes sense. They vote for their interests, which is preserving whiteness at all costs. When push comes to shove, many white women in this country have historically shoved people of color out of the way. These suburban, PTA moms were “segregation’s constant gardeners” who helped keep Jim Crow alive; they upheld white power at the expense of Black and brown women as they marched towards suffrage; and they even came out to derail the Equal Rights Amendment, thanks to the advocacy of conservative firebrand Phyllis Schlafly, who argued that (white) women, and their (white) families, were better under the current, unequal system that promoted patriarchy and white supremacy.

I mean he could have saved himself and readers a lot of trouble just by writing “white women suck” and leaving it at that.

Oddly enough, he didn’t seem dissuaded when it was pointed out to him (and others with similar rants) that those same white women helped elect the first black female Lt. Gov. in the state as well as a Hispanic AG, another first for the state, I believe:

#whitewomen voted for this woman.

So you can take your bullshit argument and shove it up your ass. You don't know WTF you are talking about.🙂 pic.twitter.com/Evg4mjBq7C

In Ali’s defense, maybe he wasn’t aware of this inconvenient bit of information since certain national news outlets didn’t find it relevant enough to mention in their reports on “historic firsts”:

By the way, the words "Winsome Sears" and "Jason Miyares" appear nowhere in this article.

USA Today has since fixed their rather stunning omission, but only after prodding from a Fox News media reporter.

As to the rants from Ali and all the rest, it just goes to further prove the point made by Fuzzy here that no matter how badly their agenda gets rejected by voters, leftists just never learn. It’s never their fault when they lose. It’s either voter fraud or “racism/sexism/etc.” from voters that are to blame, in their view. It also proves a point conservative women have long made about how Democrats really don’t give a damn about respecting a woman’s opinion unless she has the “correct” opinion and votes the “correct” way.

Having said all that, though I’m not a Virginia voter (North Carolina girl here), I am one of those “white women” who Ali and his ilk on the left frequently blame for this country’s ills when election results don’t go their way. But this “white woman” distinctly remembers Ali, along with CNN host Don Lemon and Lincoln Project co-founder Rick “Confederate cooler” Wilson mocking southern voters back in January 2020 in a laugh-filled segment where the words “boomer rubes” were uttered using a fake southern accent.

I wonder how many of those white women were concerned parents who didn’t like what was happening in the schools.

In so many words…

I am guilty as charged and damn proud of it.

I have been called every name under the Sun for it by the left since 2008 and by Never Trumpers when I endorsed Trump in 2016 instead of Ted Cruz.

Never Trumpers here on the comment section called me “Voting Vagina” (among other names) for supporting Trump instead of Ted Cruz.

Name calling for “wrong think” is human nature and people on both sides do it.
I don’t take any of it personally.

Liberal Playbook: never take the blame when you can blame others and there are always others to blame.

Women please take note. You are no longer getting a pass because you are female. Unless you are a woman of color or transgender or gay, you were thrown under the bus.

Lesbians are also under attack from the extreme left for their intolerance by refusing to have penetrative sex with trans women. I am not kidding.

Great plan, lefties. Go after white women. Post delusional rants claiming they’re white supremacists. That doesn’t sound like a winning strategy to me, but then I lack your brilliant political insight.

“…they vote their interests…”

How shocking. Isn’t that what everyone does? How else are we supposed to vote? That is the entire reason for voting and it works with ADULTS!

Clearly, you don’t understand America’s systemic racism.
White people cannot even be neutral, They must be “allies.” “Anti-racists.”
In practice, this means that white people must do all of the social heavy lifting for free — efffort-intensive work to benefit another class, while it does not benefit them or their families one iota (in fact, it often disempowers them).
Now, who remembers the last time we had a class with a similar job description? What did we call them? (Nope, not “allies.”)

Wajahat Ali is a Muslim dedicated to the quiet, but violent overthrow of the United States of America

My take from all of this: the complainants are saying that white women don’t know their place.

Seems Democrats have always had some kind of obsession with regarding certain groups of people as their property.

Wajahat Ali is obviously a racist and a misogynist. Who is enabled by the likes of Twitter, Facebook, and the Dem-media propaganda complex.

Imagine a non-black guy tweeting anything critical of ‘blackness’ or making sweeping derogatory tweets about black women in general. He’d be suspended in minutes.

Bullying white voters has worked in the past. He is assuming they are spineless even when defending their children. He is wrong.

“The only position for women in the SNCC is prone.”
-Stokely Carmichael

Black men have always taken credit for all of the things women have contributed to the civil rghts movement and blamed them when things didn’t go their way. Why would this come as any surprise?

Wajahat needs to secure her brethren before speaking.

Women? Wait until they find out how the Hispanics voted!

Considering that in parts of the state, particularly Northern Virginia, quite a few white women identify as Democrats, by lumping all white women together they’re insulting them too.

I chalk it up to the mentality that women are only supposed to consider a certain limited number of issues when they vote, abortion being at or near the top of the list, so it makes them mad when they learn the hard way that women are capable of taking other things into consideration, like public safety, taxes, the economy, education, and national security.

With respect to the economy, VA certainly wasn’t and still isn’t immune to the fallout from CD-19 when it comes to businesses shedding jobs or closing, even in federal-employee-heavy places like NoVA.

Something that isn’t being noted: The Millennials and Gen Z who voted on Tuesday did a 10-point swing from D to R.

A word of caution, yes indeed the repubs won that state but like all waves they can be very short lived. McAuliffe ran one of the worst campaigns imaginable yet still lost by only a few percentage points.
Youngkin has to deliver, especially education reform if he is going to see his election victory pay dividends.

Most political parties when faced with a crushing defeat fail to look inward and self reflect, instead they don’t accept the fact that they had a poor candidate and a candidate who tried to make a state election a national one. MCAuliffe had more gaffs in the last month than most candidates have over the course of an entire campaign. They also trotted out one of the most unlikeable people in the country as a closer and she failed miserably.
Blaming it on race is the lazy fall back position these days especially when two minorities win the undercard as well

But how can they do otherwise? This is the entire premise of CRT, which is sacrosanct. DIdn’t get a job because of your history of arson? It was due to racism. White kid shoots three violent white rioters? He was a racist. Large asteroid perturbs the orbit of Pluto? Racism. Don’t get elected governor of California? Black white supremacy.

“Youngkin has to deliver”

How, considering the composition of Virginia’s legislature?

The d/prog strategy to continue demonizing voters even when the voters repudiated this on Tuesday shows the current state of the d/prog. Immature, childlike anger lashing out, vindictive threats and a complete lack of self reflection. It’s always someone else’s fault, never their own and that fault is centered in ‘isms’ because anyone who doesn’t toe their line is an ‘ist’.

Never forget the motto:
“Communists: Taking everything but the blame since 1851.”
(It used to say 1918, but 1851 was when Marx tried to blame Engels for the paternity of his own bastard son with the housekeeper.)

When you finally tell white women that their children will be punished for crimes of people 50 and 100 and 400 years ago they may push back.

The upside is that the “progressives” haven’t learned their lesson. 2022 will be a major shock, but they will tell themselves that they got creamed because they weren’t radical enough. 2024 will be 1972 all over again, or 1964. Welcome to the wilderness, Democrats. Happens to everyone at some point, and now it’s your turn.