New VA Lt. Gov. Republican Winsome Sears: ‘What You are Looking at is the American Dream’

New VA Lt. Gov. Republican Winsome Sears: ‘What You are Looking at is the American Dream’

“There are some who want to divide us and we must not let that happen. They would like us to believe we are back in 1963 when my father came” to America from Jamaica. 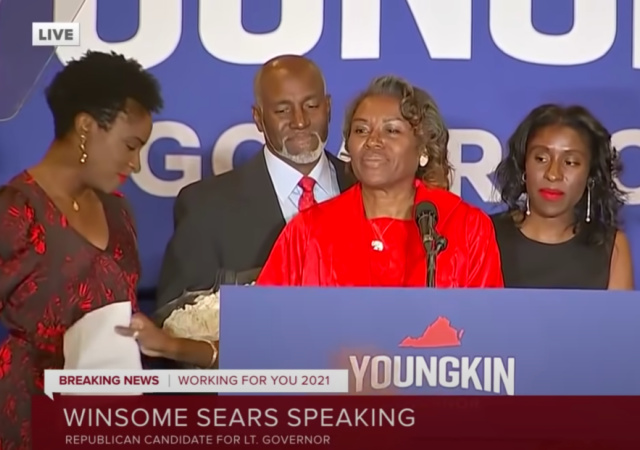 Winsome Sears was born in Jamaica. She was raised in the Bronx. She joined the Marine Corps.

Before politics, Sears was director of a Salvation Army homeless shelter. She owns an appliance and plumbing repair store. She was also the vice president of the Virginia Board of Education.

I normally do not like to play identity politics, but this is AWESOME.

Sears delivered one hell of a victory speech: “I’m telling you that what you are looking at is the American dream.”

“There are some who want to divide us and we must not let that happen,” declared Sears. “They would like us to believe we are back in 1963 when my father came.

“In case you haven’t noticed, I am black, and I have been black all my life.”

She also said: “When I joined the Marine Corp I was still a Jamaican but this country had done so much for me that I was willing, willing to die for this country.”

Sears promised to get right to business: “What we are going to do now is be about the business of the Commonwealth. We have things to tend to. We are going to fully fund our historically Black colleges and universities. We’re going to have safer neighborhoods, safer communities, and our children are going to get a good education.”

This is a great day. Perhaps the biggest win is ousting mark herring from the ag office.

Now, being serious, what was wrong with

That’s because I was too busy walking in the opposite direction toward the fire escape.

That came the same morning I sat at my desk reading my name on the back of my office door. Regnad Kcin!

You must have made that up. I’m quite sure it actually says:

Congratulations, Lt. Gov-elect Winsome Sears; you did it the old-fashioned way; you earned it. We are all proud of you!

Did anyone bother to tell Joy Reid that?

I think Joy needs to change her name to Miserable.

If she holds her breath until she turns blue, will she go from Joy to Dawn? (I doubt Proctor will Gamble on that one….)

That never Dawned on me, but I suppose she might.

It might help turn the Tide, and we’d all be of good Cheer. If we make Gains, it would set a new Trend, no matter what the opponent Duz.

Damn! That’s a classic right there! There’s no way I could ever hope to out do that.

Reid the the American nightmare. So was Obama.

But she “ain’t black” according to Drooling Joe

Who had the worse night? The Houston Astros or the Democrats?

Not a comparison. The Astros played a good and fair game and season. They can be proud of their second-place finish. Not at all like the Democrats.

Great speech! The woke left views Sears and any black conservative such as Thomas Sowell as traitors to their class.

This woman believes in what she says and she knows what to do. Good choice.

ANOTHER “Black face of White Supremacy?”

Amazing. I think the Republican AG who got elected was also one of those pesky conservative Latinos. Or is that Latinxs?

No, “Latinxes” are all Democrats. No self-respecting Republican would ever identify himself by such a stupid name.

No self-respecting Latino/Latina would claim the Latinx term. Arminium has it right.

The “Latinx community” thingy is really biting the lefties on the @$$ hard. Because it isn’t something Latinos came up with themselves. It was something cooked up by the white wokestapo and imposed on Latinos.

So it has a lot of Latinos pissed off about just another example of white “colonialism/imperialism.” Which I find hilarious. Here the leftists are accusing the right of white supremacy, racism, colonialism, and imperialism. All the usual Marxist B.S.

Then the white leftist turn to the Latinos and tell them, “Oh BTW we’re going to decide what you’re going to be called, not you, because only we are qualified to run your life.”

Sears & Roebuck has just about had it, but Winsome Sears is just getting started.

Best win of the night in my opinion. Her victory speech was the first time I’ve heard her speak and she is Fantastic!

In 4 years, the next Gov of Virginia.

Hey, look, a black woman won an election last night and didn’t have to spread her legs like a whore to do it. Maybe Harris can take some pointers.

That, and Sears ran on her merits, not her race.