Parents “backed McAuliffe by 10 points two weeks ago. Now, they go for Youngkin by 14.” 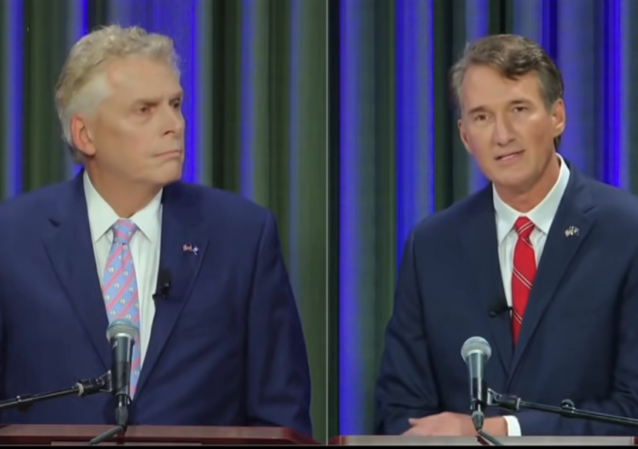 Virginia has been nearly hopeless for Republicans in recent years. Yet there is movement towards Republican Glenn Youngkin. The polling prior to today moved from advantage Terry McAuliffe to dead heat. Democrats were worried, flying in Obama and Biden to stump for McAuliffe.

But no matter what the polls say, McAuliffe may pull it out somehow over Glenn Youngkin. It’s Virginia. Northern Virginia might as well be Illinois or New York in its voting patterns. The federal bureaucrats and those to whom they funnel money loves them some Democrats.

Fox News just  released a poll which shows a massive swing towards Youngkin, from McAuliffe being up 5 two weeks ago, to Youngkin up 8 in the latest polling:

Republican Glenn Youngkin has moved ahead of Democrat Terry McAuliffe in the Virginia governor’s race, less than a week before the election.

That’s a big shift from two weeks ago, when McAuliffe was ahead by five, 51-46 percent. 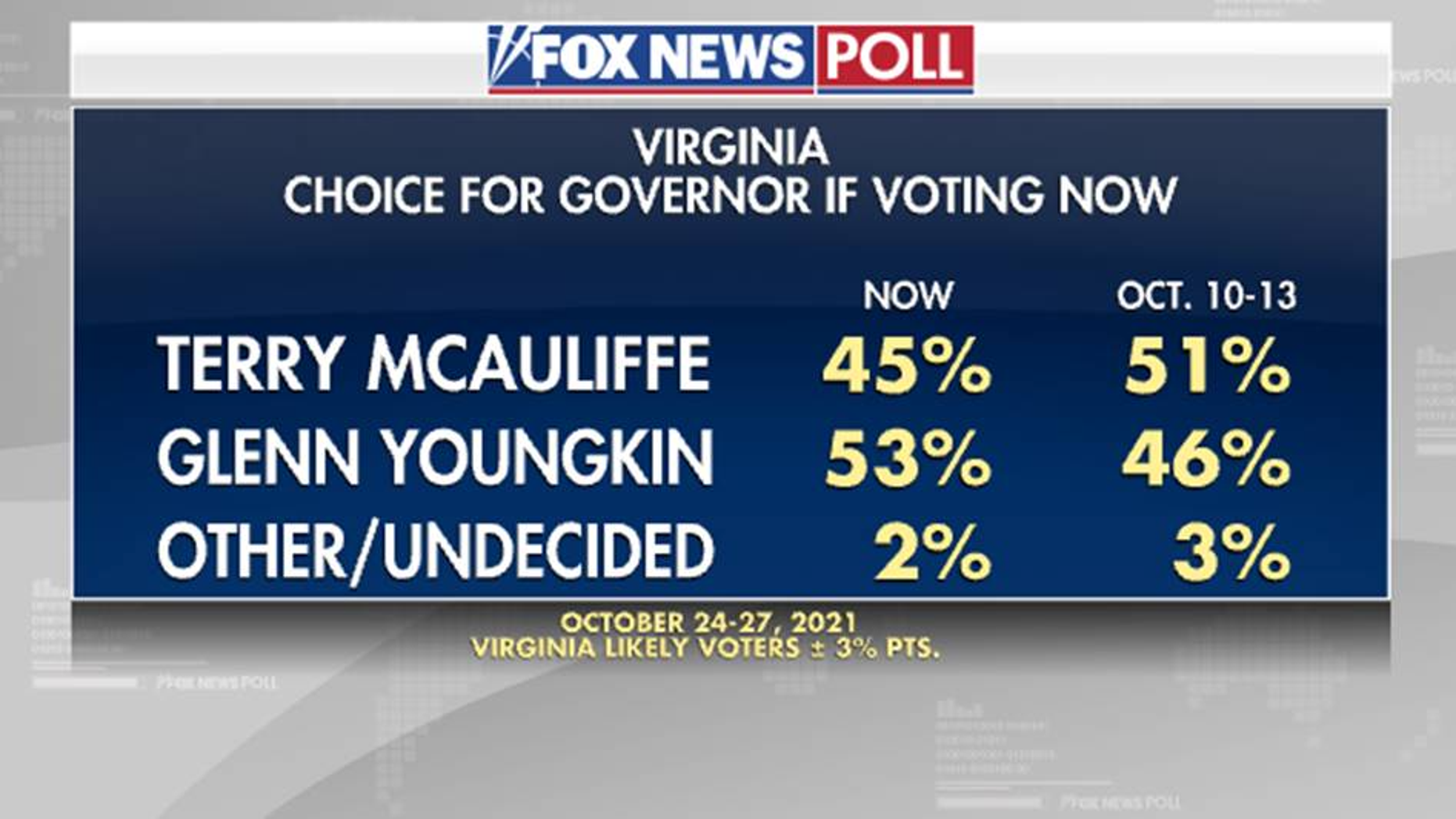 Well if you watch the news, you know that northern Virginia, the blue areas that always swing elections late at night to Democrats, also is the heart of the fight over schools. The student rape coverup in Loudoun County, together with intense Critical Race indoctrination, may have even Democrat voters sick to their stomachs.

It’s a point I’ve made numerous times. Parental rights and corrupted education is a cross-over issue. Parents of all political persuasions, and all races and ethnicities, are disgusted and infuriated.

What changed? GOP enthusiasm. The race is largely focused on education and this has energized Republicans, as 79 percent of Youngkin supporters are “extremely” interested in the election compared to 69 percent of McAuliffe supporters….

Youngkin promises to ban the teaching of critical race theory on his first day in office, while McAuliffe denies CRT is even taught in Virginia schools. In addition, McAuliffe is still explaining his comment in the final debate that parents shouldn’t “be telling schools what they should teach.”

The survey, released Thursday, finds movement in the views of parents. They backed McAuliffe by 10 points two weeks ago. Now, they go for Youngkin by 14. On the question of which candidate they trust to handle education, Youngkin’s previous 1-point edge among parents has widened to 12.

Among parents, Youngkin has dads to thank. Moms back him by just two points overall, and they trust both candidates equally on education. For dads, those numbers are +23 and +21 for Youngkin respectively.

“Education is a top issue, which is usually good news for the Democrats since they are typically seen as more capable in that domain,” says Shaw. “But Youngkin has turned the issue on its head so it’s about curriculum and parent involvement rather than spending. The result is the GOP is currently preferred on perhaps the critical issue for this election.”

Among all likely voters, trust on education moved from McAuliffe by two points to Youngkin by eight.

This chart maybe most important – among parents Youngkin is up by 14 points: 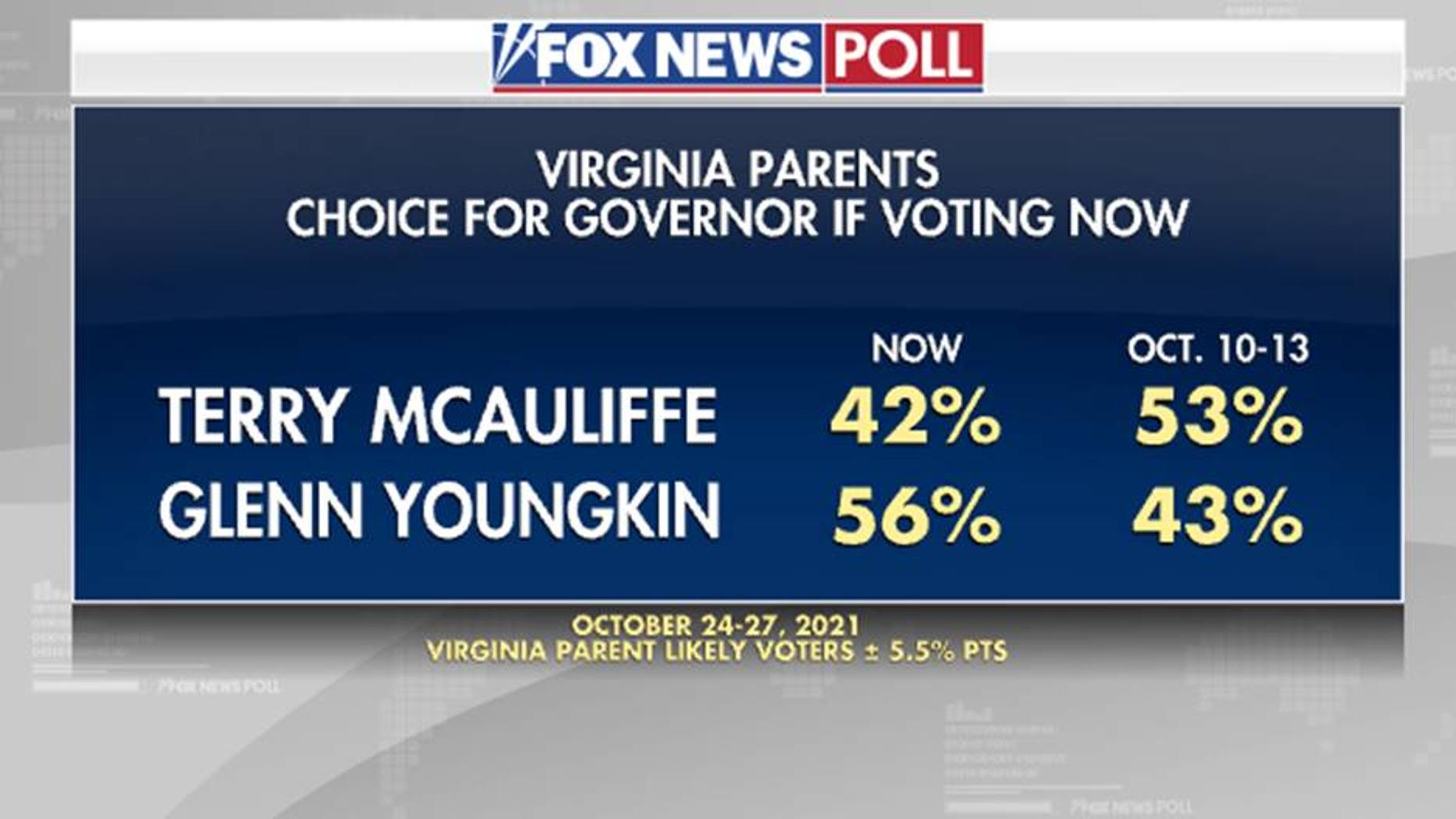 Something’s happening here. But I’ll believe it when I see it.

WaPo shows a dead heat but a YUGE swing on education:

Our new Washington Post poll shows that EDUCATION is now the No. 1 issue for Virginia voters in the governor's race, edging out the economy.

In September, education voters favored McAuliffe by 33 points, but now they tilt toward Youngkin by nine points.https://t.co/9JgBtcyTkR

From WaPo, with its usual crap take that CRT is “not actually” taught:

Youngkin is fueled by an 18-point advantage among independent likely voters, up from an eight-point advantage last month — a significant swing in a group that could determine the election’s outcome. While Virginia does not register voters by party, 33 percent of voters in the poll identified themselves as independents. That compares with 34 percent who said they consider themselves Democrats and 27 percent who said they are Republicans.

The Post-Schar School poll, which was conducted Oct. 20-26, finds a larger share of voters saying education is the top issue in their vote compared with the September poll, with fewer citing the coronavirus as the biggest factor in their decision….

Youngkin seems to have moved the needle in recent weeks by campaigning on issues related to schools, capitalizing on a national conservative movement of parental grievance. The Republican stokes up rallies by promising to ban the teaching of critical race theory, an academic concept about the history of racism that’s not actually on Virginia’s K-12 curriculum, and by warning that McAuliffe will ignore parental concerns about issues of gender and sexuality.

Possibly as a result, education has risen to the top of the list of likely voters’ priorities, with 24 percent saying this is their top issue, up from 15 percent last month. Education now rivals the economy, which 23 percent of likely voters named as their most significant issue.

Youngkin has gained significant ground among those voters: In September, education voters favored McAuliffe by 33 points, but now they tilt toward Youngkin by nine points.

The cheat is on make not mistake

All the more reason for r voters along with d and independents who don’t want the State to raise their children to show up and vote for Youngkin. Create a wave too big to overcome by shenanigans.

No, not this time. We need to stop being so cynical and defeatist. Youngkin campaign and Virginia Republican parties are prepared. Get your friends in Virginia to vote. Glenn will also win by too large a margin for cheating

If you took the time to read the Arizona audit report – the actual report itself and not the media representations of the report – you would know that there is no such thing as a margin that is insurmountable by those who will break the law to win.

Glenn Youngkin is not really a conservative. He is more of a Country Club Republican.
BUT, he is not a crazy liberal. So, I wish him and the people of Virginia all the best.

No actual ballot manipulations reported in VA as of yet, but this is classic. They even brought tiki torches (in the rain and during broad daylight!) https://townhall.com/tipsheet/guybenson/2021/10/29/pathetic-dems-pose-as-white-nationalists-supporting-glenn-youngkin-n2598259

The commies are bringing in Mark Elias to protect the voting fraud. Youngkin will have to ‘Beat the Cheat’ by the democrats.

The only way to beat the Democrats is to have as many lawyers as they do. So, every time they walk into a county election board with 5 lawyers, you have 5 lawyers there too. This is exactly what North Carolina did in 2020. And, when we went to bed on election eve, Donald Trump had a small lead. Then, when we woke up the day after, Donald Trump still had a small lead.

Youngkin is getting the ‘domestic terrorist’ vote. And there are a lot more of them in Virginia than the Marxist Dems thought. Possibly more than their grass roots vote fraud operation can overcome.

“And there are a lot more of them in Virginia than the Marxist Dems thought.”
Just look here (scroll down one screen for the map).
And enjoy the delicious irony of the big red county at the top.

McAuliffe also deserves appreciation. He could have walked it back, but chose to expose the reality even more.

The parents have joined the counterculture.

In the school of tone-deafness, he learned from the master… Hillary Clintoon

It’s almost like he thinks he has this in the bag and he doesn’t have to care what the actual voters want anymore, and only has to care about what the insane radicals that are stealing the election for him want.

If we make them cheat enough it will become impossible to hide. It was close in 2020. It needs to be obvious to everyone even the middle of the road rank and file Democrats that don’t pay attention to the man behind the curtain if CNN tells them not to.

It was ‘close’ in 2020??? They blatantly violated election laws in multiple states and NOTHING happened.

McAweful may be so bad they can’t cheat enough to win it.I hope so.

Can Youngkin beat McAwful with even %15 vote advantage?
That’s where we are as a country with fraud.

Biden is a disaster for the Dem Party. Everything he touches turns to shit.

This is a CLUSTER F*CK that will HAUNT the Democrat Party for years.

>> Say what you want about Trump – his policies actually made rational sense. And he picked competent people to run things.

If Youngkin is 10 points ahead in the polls, then I would say his odds of winning are 50/50.

>> So based on your assessment – it looks like he now has a fighting chance.

Let’s hope McNasty gets what is coming to him. There are a lot of Momma Bears out there who know danged well that they have a right to input in their kids education.

I’m still trying to figure out how parents could have supported McAuliffe two weeks ago. The issues at Loudon County have been going on for at least a month or two, unless the conviction of the transgender rapist by the judge and the coverup made people finally sit up and take notice what was happening. And McAuliffe is a terrible candidate. Hope he goes down.

I’m going to go with- the internet. The MSM has been downplaying. The issue exploded on social media, so even the normies who rarely pay attention to politics can’t help but see it.