“Don’t worry @dominos, it turns out that the only brand cancelled today is the brand of Rick ‘The South will rise again’ Wilson,” tweeted Donald Trump, Jr. 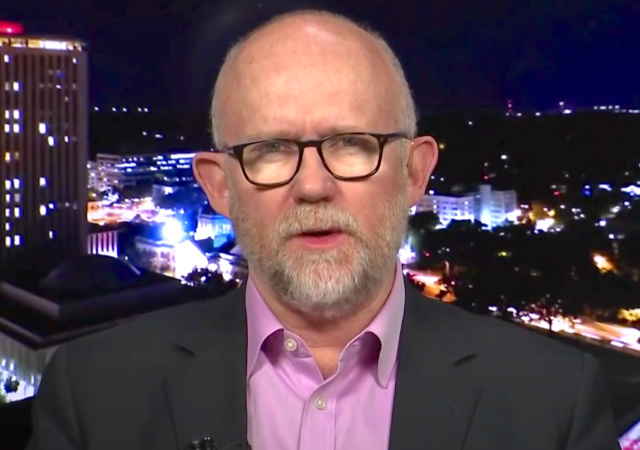 Rick Wilson is not having a terrific week.

Because Democrats and the mainstream media are steady trying to cancel people and companies for WrongThink in the aftermath of the death of George Floyd, apparently #NeverTrump grifter Wilson thought he’d get in on the action, too.

Wilson, who is one of the more out-front advisers to the anti-Trump “Lincoln Project” PAC, found a response tweet Monday night from Domino’s Pizza to White House press secretary Kayleigh McEnany and rushed to cancel the national pizza chain over it. Here’s what he tweeted:

Except there was a big problem. In trying to dunk on Domino’s for posting a friendly social response to a member of the Trump administration, Wilson neglected to check the date on the message. It was from nearly eight years ago, well before Trump’s presidency, and when McEnany was still in college. Note the date on her tweet and their response to it :

@kayleighmcenany That's one heck of a compliment! Thanks for the love! #WEAPPRECIATEIT!

Welp. It’s unfortunate that thanking a customer for a compliment back in 2012 would be viewed as political. Guess that’s 2020 for ya.

Wilson, who has made guest appearances on CNN and MSNBC since President Trump was elected, tried to wiggle his way out of the embarrassment his cancel fail brought to the Lincoln Project brand, but it didn’t work:

Speaking of past tweets about killing brands ? pic.twitter.com/Z5ls2XfVGL

Strange. It appears this tweet has been deleted. ? pic.twitter.com/lWaS2yeXNW

Twitter users James Hasson and Jerry Dunleavy had a field day with Wilson, questioning him on past projects and digging up old tweets of him insulting Joe Biden, who the Lincoln Project has endorsed:

I actually had an excellent day, Rick.

You, on the other hand, are tweeting at Dominos because they replied to Trump's spokesperson 8 years ago. Calm down.

PS: you took $64k to make a film about Trump, but you never made it. What happened to that money? https://t.co/aFmHRLfncw https://t.co/H2gUJOwk2n

Oh, and by the way @TheRickWilson, when can we expect the Lincoln Project ad touting today’s Planned Parenthood endorsement of Joe Biden?

Unfortunately for Wilson, his bad week was about to get much worse.

Because he went tweet-digging to cancel Domino’s, others started digging beyond Twitter to see what Wilson had posted on some of his other social media accounts. People discovered images he shared on his Instagram account of a cooler with a Confederate flag and messaging and splashed on Twitter. It brought further embarrassment to the Lincoln Project, who just a few weeks ago released an error-filled ad trying to shame President Trump for the people who fly Confederate flags at his rallies:

Hi @TheRickWilson, I know you’re desperately deleting pictures of your confederate “THE SOUTH WITH RISE AGAIN” cooler you have, but it looks like you missed one.

That thing goes everywhere with you, huh? pic.twitter.com/LjxRP6jt2Y

Not sure how an organization called "The Lincoln Project" could have as one of its principals a guy who proudly displayed the Confederate Flag on his boat.

How does that work, @ProjectLincoln? Anyone? @gtconway3d? @SteveSchmidtSES?

This was Wilson just two weeks ago:

It’s almost as if our Flag of Treason ad was…what’s the word?

Don't worry @dominos, it turns out that the only brand cancelled today is the brand of Rick "The South will rise again" Wilson. https://t.co/AiT73noo2I pic.twitter.com/tXyK2eGH3w

I believe this is what Wilson would call “killing your brand,” but he’s too busy trying to bury his hypocrisy on his Twitter feed by sharing umpteen tweets from the Lincoln Project for us to know for sure.

There are lessons to be learned here about the dangers of playing the cancel culture game, but acknowledging that he acted stupidly in using an 8-year-old tweet to nuke Domino’s is not in Wilson’s DNA. Mocking and ridiculing the very people he used to count on to vote for the Republican candidates he once represented is more his style.

If this is what “principled conservatism” is supposed to look like, please count me out.

I think the Bible covers what happened here. Something about throwing the first stone. No need to Google it. We all know it except, apparently the “conservative” Wilson.

notamemberofanyorganizedpolicital in reply to clintack. | June 17, 2020 at 2:15 pm

Meh. As long as Wilson is useful to them the MSM/DNC axis will give him a pass on his Confederate battle flag. After all, the MSM/DNC axis has ignored the widespread presence of guns (particularly AK-47s) at BLM and Antifa demonstrations, so what’s a little ol’ “white supremacy” symbol among fellow Communists?

All this will get him is the Robert Byrd Memorial Trophy of the week.

notamemberofanyorganizedpolicital in reply to windbag. | June 17, 2020 at 2:16 pm

HILLARY AND NANCY WILL PRESENT IT.

Why do we even care what this BIGOT says?

because we can mock him for it?

or was this one of them there rhetorical type questions?

asking for a friend… 😎

Buzz:
You’re mocking me, aren’t you?

One of my favorite movie lines.

I like Dominoes pizza but I despise the deplorable Rick Wilson. So, since he decided to annoy me I have decided that I am annoyed and will drop Dominoes for the rest of the year, maybe longer if he doesn’t keep his opinions to himself.

I don’t like the racist police departments in cities that have been run by Democrats for the last 4.5 billion years. The solution is obvious: elect more Democrats and ban Aunt Jemima’s syrup.

Seems he may have outlived his usefulness to the left.

It’s all so whack-a-mole.

Guess what? This rat had financial problems just as he started stabbing us in the back:

No one likes or trusts a doublecrossing, petty snitch.

This is some good schadenfreude. https://mobile.twitter.com/RacistCooler

Did they use “Dixie Cups”? (oh noes! Another Aunt Jemima!).

He and Steve Schmidt are like two rabid dogs.

After watching obama for 8 years, treason has become appealing to many people of marginal character.

That really is obama’s legacy: 8 years of pure treason.

I cannot for the life of me figure out what is motivating these infantile, self-aggrandizing and embittered anti-Trump cuckservatives. Is it pure narcissism and seeking — perplexingly — approbation from the Dhimmi-crat media and Dhimmi-crat activists? Is it about getting a paycheck and padding one’s bank account? I throw David Frum into this category — remember him? A former Bush II speechwriter. Since turned Leftist. Joe Scarborough, former GOP Congressman. Bill Kristol. This idiot, Wilson. Scores of others. So, it must come down to a combination of narcissism and pecuniary self-interest. Which means we are dealing with a bunch of feckless, unprincipled and self-serving mercenaries.

“Feckless”? Does that mean they’re out of “fecks” to give?
What would Father Jack think, being out of fecks and all?

what a great show–Jack’s ” eye exam ” chart was priceless– feck, feck, feck=100%–and the local ” fete ” with the swing and the lone stray cat on the round-de-round,lord

Make them play by their own rules.

If this were to happen to an American, I’d be outraged.

But, to anyone on the Left that does this sort of thing to us?

Particularly so since this post of his confederate flag was made in response to him trying to “cancel” someone. In this case, cancel and shame Dominos for thanking Trump’s Press Secretary for a compliment she gave them EIGHT YEARS AGO.