Is Sinema wavering? I thought she was already a definite no on the “human” infrastructure crap sandwich. 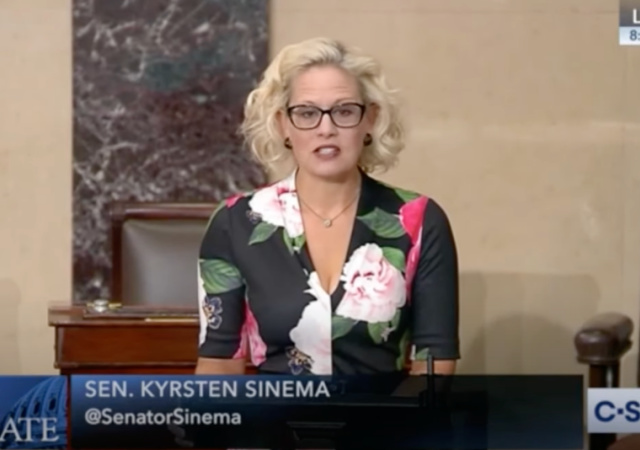 Moderate Sen. Kyrsten Sinema (D-AZ) allegedly told Biden that she would vote no on the $3.5 trillion reconciliation package if the House does not vote on the $1.2 trillion infrastructure bill by September 27.

No one, and I mean absolutely no one, should be surprised by this news. Sinema is one of the few people in the government who is consistent and does not put the party above her constituents.

But is she wavering?

Sinema said from the get-go that she would vote no on the $3.5 trillion bill. The House voted to advance the bill in August. Her spokesman said House proceedings “will have no impact on Kyrsten’s views about what is best for the country – including the fact that she will not support a budget reconciliation bill that costs $3.5 trillion.”

Sinema and the White House did not confirm or deny the story given to Politico Playbook.

Moderate Rep. Kurt Schraeder (D-OR) said 10 Democratic moderates in the House took Sinema’s side. They told House leadership and the White House that if the House delays the vote, “you can kiss reconciliation goodbye.”

Schraeder said a delay would “be foolish on their part.” He reminded everyone that the entire leadership team was in the room when the promise was made to hold the vote by September 27.

“That would indicate they’re not playing fair in the sandbox. … It would be a travesty if they try to play games,” stated Schraeder.

The far-leftists in the House have not given up their cause either:

This is obviously big news if moderates follow through. The threat comes days after Congressional Progressive Caucus Chair PRAMILA JAYAPAL (D-Wash.) declared that House progressives had the votes to tank the infrastructure plan, aka BIF, unless it’s paired with the larger $3.5 trillion reconciliation package. But it’s become abundantly clear the reconciliation bill won’t be ready a week from today, the date when Speaker NANCY PELOSI promised moderates a vote on the $1.2 trillion bill to rebuild the nation’s roads and bridges.

The progressives supposedly think they keep yelling about killing the bill the moderates would bend the knee.

However, some moderates quietly believe “that no infrastructure bill is better than one that’s paired with $3.5 trillion in spending.”

So will the moderates cave in the end? They ended up voting to advance the bill after Pelosi agreed to hold the vote by September 27.

Will Sinema cave? If moderate Sen. Joe Manchin (D-WV) sticks to his guns, I bet she will remain a no even if the House votes on it by September 27. Manchin said last week he is a “hard no” on the reconciliation bill.

I hope for implosion.

All of this is just political theater designed to keep the drama afloat for the poll watchers and viewers. I’m starting to become more and more politically apathetic as I notice the GOP does a very similar “infighting” dance when in unilateral power that magically torpedoes their own promises.

Guess we will wait and see on this one. I hope it implodes, but I also think it is a big show so certain Dems can say they tried to please their constituents without delivering. Just a bit of a trick to remain in power as long as possible and do more and more damage to the country by remaining politically impotent in the face of rising national and international threats.

Wait, this is somehow twisted: It’s the _Republicans_ that are supposed to be disappointed with the Republican senators they elected.

On the other hand: she has an emormous opportunity to be a hero to most of the electorate. She’s a bit odd at times, but she’s showing she has integrity and intelligence.

Compare to that raging narcissistic moronic brat Alexandra Cortez and her tax-cheat dress.

I’ll believe it when she casts an actual vote

Everyone knows that sinemas come out with a lot of hype but usually turn out to be a big let down when everything is said and done.

Yes, she is a Lucy…..waiting to pull the football away!

Well, she could just be using Democrat speak–by not saying that she is a no even if the Democrats vote on the smaller bill.

I have to say that even though she is a Democrat, she is showing more guts and principle than the last three Republican senators Arizona horked up have ever done.

It’s embarrassing to remember the stuffed animal AZ Rs put up against her (twice). Her campaign made orange signs with white letters. I remember squinting in the car wondering “Who is ‘MoSalty?’

So if this plays out, both wings of the Democratic Party don’t get what they want. Gridlock baby! And while they are fuming we can vote them all out.

I think Sinema is an interesting swamper. I probably should not say this, but she definitely seems to project her body image like a cheap hooker.

That said, I think she is just playing the role to pacify just like Joe Manchin. Maybe she is concern that the Az audit could throw her out.

Yes, you should not say that.

As is true of most Senators, once in office, she seems to be evidencing a higher class of grooming and couture than she did when she was campaigning as a “Prada socialist.”

I mean, the haircuts on those guys.
GQ quality, even the slobs.
Not a Doug White among ’em.

President Joe Biden has introduced a $3.5+ trillion spending plan, supposedly for infrastructure. The plan relies on the word “infrastructure” to seem moderate and uncontroversial. Yet, of the $3.5 trillion in total spending, between $90 billion and $100 billion (or less than 5%) would go toward traditional road infrastructure projects. The $3.5 trillion infrastructure plan has more to do with corporate welfare and the Green New Deal than actual infrastructure. The infrastructure spending in this plan has more in common with the controversial Green New Deal than the traditional highway bills that pass with strong bipartisan majorities.
The Biden plan would dramatically increase taxes on businesses, primarily by boosting the corporate income tax from 21% to 28%. $3.5 trillion tax hike would stunt post-pandemic economic recovery. Even despite the massive tax increases, it would take 15+ years of higher taxes to pay for just eight years of spending under the plan. Imposing this burden when the economy is in the process of recovering from the COVID-19 recession would be wildly counterproductive.
The plan would spend nearly 50% more on trains and buses than on roads. A wasteful $165 billion handout for non sustainable transit and Amtrak. Over $400 billion in welfare and health spending. While there is an active debate regarding what infrastructure is appropriate for the federal government to fund, no reasonable definition of infrastructure includes expanding Medicaid benefits for long-term care or starting new social benefit programs. Today, we owe more than $28 trillion ($28,000,000,000). That number is so large nobody understands it. This is the proposed $3.5 Trillion Infrastructure Bill that the democrats have threaten to cram down our throats. The rest is pure political PORK! This is what we can’t afford to continue doing!

There’s a hell of a lot of evil in this bill–not just the outrageous spending. Sinema and Manchin could be bigger heroes than the few sell-outs we have in the Republican party by voting “no”, and be the difference between holding onto our country or losing it. However, I’m expecting the worst so that I won’t be disappointed should they throw in with the rest of the commies in their party.