I knew the moderates would cave. Then again, they know Sen. Sinema and, likely, Sen. Manchin will not vote for the bill in the Senate. 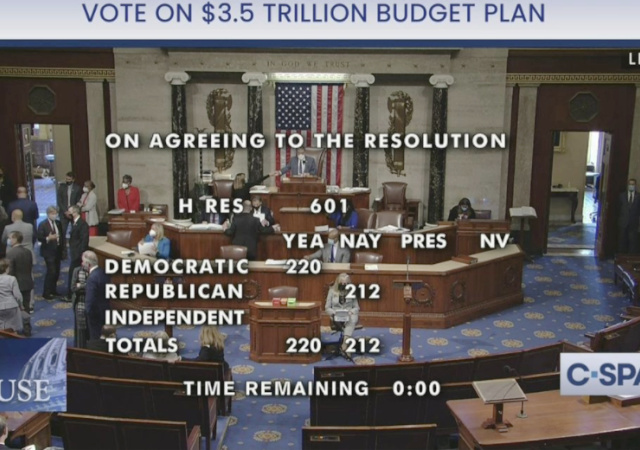 The House advanced the $3.5 partisan trillion infrastructure bill 220-212 after Speaker of the House Nancy Pelosi made a deal with the nine moderate Democrats who stood in the way.

That’s odd. I thought the moderates wanted to pass the $1 trillion bill first. I had to double-check all of the headlines because I thought for sure they’d vote on the bipartisan legislation.

Tensions had flared as a band of moderate lawmakers threatened to withhold their votes for the $3.5 trillion plan. They were demanding the House first approve a nearly $1 trillion bipartisan package of other public works projects that’s already passed the Senate.

In brokering the compromise, Pelosi committed to voting on the bipartisan package no later than Sept. 27, an attempt to assure lawmakers it won’t be left on the sidelines. It’s also in keeping with with [sic] Pelosi’s insistence that the two bills move together as a more complete collection of Biden’s priorities. Pelosi has set a goal of passing both by Oct. 1.

Easing off the stalemate will shelve, for now, the stark divisions between moderate and progressive lawmakers who make up the Democrats’ so-slim House majority. But as the drama spilled out during what was supposed to be a quick session as lawmakers returned to work for a few days in August, it showcased the party differences that threaten to upend Biden’s ambitious rebuilding agenda.

There has to be more to the story. The nine Democrats have spent weeks threatening to withhold this bill, which is more about “human” infrastructure than actual infrastructure.

The Democrats did not object to the bill. They wanted the House to process the bills separately.

However, to me, it seemed the moderates wanted to take on the $1 trillion bipartisan infrastructure bill before the partisan bill.

They authored a passionate op-ed in The Washington Post about their want to pass the $1 trillion bill.

“Across this country, far too many communities are struggling with crumbling roads and structurally unsound bridges, outrageous congestion, lead-coated pipes and no broadband access,” the Democrats wrote. “You don’t hold up a major priority of the country, and millions of jobs, as some form of leverage. The infrastructure bill is not a political football.”

I thought the moderates found the bipartisan bill more important than the “human” infrastructure bill.

September 27th is over a month away. How much would you like to bet something happens that somehow forces Pelosi to move the date?

Not like this matters, though. Moderate Sen. Kyrsten Sinema (D-AZ) already declared she is still a no on the $3.5 trillion bill.

Sinema described the bipartisan bill as “a historic win for our nation’s everyday families and employers and, like every proposal, should be considered on its own merits.”

“Proceedings in the U.S. House will have no impact on Kyrsten’s views about what is best for our country – including the fact that she will not support a budget reconciliation bill that costs $3.5 trillion,” stated her spokesman John LaBombard.

it’s ok…. i’m sure one or more of the Senate RINOS will step up and make sure this passes.

And the RINO and NeverTrump crew are now whining that Trump is hammering Biden over his Afghanistan disaster.

Guess what you feckless cowards, if you were actually doing it already, Trump wouldn’t need to do it!

And now yet another Bush comes out to praise Biden (because he inherited the Trump disaster) and give him some gentle advice.

“W” himself quickly came out urging Biden to save the Afghan refugees with no mention of the Americans being abandoned to their deaths.

If these “infrastructure” bills get passed, you can blame it ALL on McConnell and his evil crew of fellow Decepticons.

Here is what the Bushies tell us should be congratulated:

We really need to finally expand our focus beyond how f’d up the Biden and the Democrats are. “Our” side is at least as bad and maybe worse.

Based on the way this bill exists because they stood against the more monstrously sized bill earlier forcing the Democrats to split the bill and pass different parts of it separately I would say they will stop it although Chuck Schumer is touched by the devotion you show in helping him do operation demoralize 2022 before he has even officially started it.

Sure. Sinema and Manchin the ‘moderates’ are totally going to stand firm.

Just like the ‘moderates’ in the House were going to refuse to vote for it. As soon as they got a fig leaf in the form of a ‘promise’ from Pelosi to schedule a vote IN A MONTH, they passed this monstrosity.

I’ve been warning yall since the beginning of the year.

SINEMA AND MANCHIN ARE NOT MODERATES.

They vote against The Party if, and ONLY IF, they are given PERMISSION to do so by The Party.

Any plan that hinges on Sinema and Manchin being the deciding votes in favor of Republicans is doomed to failure.

The ‘no’ votes are just ‘holding out for a higher price’ votes.

Three and a half trillion dollars means shaving even a little bit for each Senator and House Member leaves them retiring fat and rich in a few years.

The Dems will do WHATEVER IT TAKES to get the $3.5 Trillion boondoggle through the Senate.

America, as we once knew it, is slipping further away by the day.

The only thing that can stop it is Joe Biden’s death, since the Senate would no longer have a tiebreaker.

Just a matter of some bribes and threats

It would sure be nice to have one r Senate seat from GA about now. Instead we have to pin our hopes on Sinema and Manchin. Congrats to Lin Wood for his master stroke of propaganda enticing r voters not to vote in the runoff.

It was going to be stolen no matter what

“They” sure seem to have perfected something in the way of vote manipulation…..or we are indeed a nation of idiots.

as we say over at AOSHQ, “embrace the power of ‘and’, grasshopper”…

here in #Failifornia we have both!

Predestination in politics? If we don’t vote then our political enemies don’t have to steal anything because they win on legitimate numbers.

They stole both seats. They did EXACTLY what they did everywhere else – Atlanta magically stopped counting at around 10/11 PM for multiple hours, waited for all the conservative precincts to finish, then did a ballot dump that put both Democrats over the top.

And fuck both of the RINOs. If they weren’t willing to stand up for secure elections when THEIR OWN SEATS were on the line, they can go to hell. I’m sick of RINOs that lose gracefully in the fact of obvious fraud.

Not in run off they didn’t. They didn’t have to. The problem was the roughly 200,000 r voters who cast a ballot in the Nov 3 General election who didn’t vote in the runoff election in January.

When folks buy in to the warped logic of ‘don’t bother to vote because it’s rigged’ the d/progressive don’t have to steal it, because the the folks who stayed home surrendered. The fact is if the voters on our side don’t show up and vote we lose. Period.

If you want to endorse unconditional surrender to the d/progressive then be my guest but have the decency to state that opinion openly and honestly.

Bart Stupak and his group held out longer in opposition to Obamacare.

The wicked witch of the west always gets her way. If her carrots don’t work her stick does.

… in lieu of emigration reform.

The Marxists have been trying to bankrupt the country for years. They finally might succeed.

Keep in mind that these two bills “fix” the broken voting problems. There will no longer be a need for the Uniparty to rely on Republican nose-holders for their victories. The fix will finally be in forever. But oh well. We’ll give them the dirtiest looks they ever saw.

Is barely advances different from advances?

I remember when (RINO) Rep. Joe Gao took Dollar Bill’s seat and had to vote on Obamacare. A R in a D heavy city like N.O. he had to appease the masses. So, when it was obvious that his NO vote didn’t matter, he changed it to YES in an effort to bolster his standing with AA community. Didn’t work, of course, next election he was soundly defeated by Cedric Richmond (yet another piece of work), simply because he was D and AA.

Now we will see if Joe Manchin is who he has been claiming to be based on his reaction to the filibuster.