Trump Will Visit Border on June 30 With Texas Gov. Abbott

Trump Will Visit Border on June 30 With Texas Gov. Abbott

“The Biden Administration inherited from me the strongest, safest, and most secure border in U.S. history and in mere weeks they turned it into the single worst border crisis in U.S. history.” 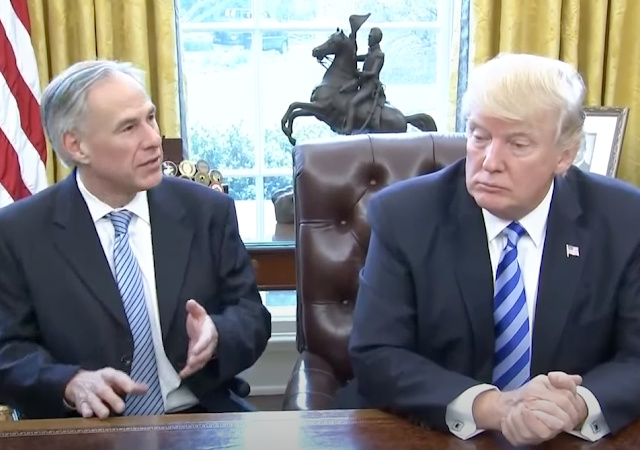 “The Biden Administration inherited from me the strongest, safest, and most secure border in U.S. history and in mere weeks they turned it into the single worst border crisis in U.S. history,” stated Trump. “It’s an unmitigated disaster zone.”

“My visit will hopefully shine a spotlight on these crimes against our Nation—and show the incredible people of ICE and Border Patrol that they have our unshakeable support.” pic.twitter.com/PVrlxgYIfL

We went from detain-and-remove to catch-and-release. We went from having border security that was the envy of the world to a lawless border that is now pitied around the world. Biden and Harris have handed control of our border over to cartels, criminals, and coyotes. Drug dealers, MS-13 gang members, human smugglers, sex traffickers, and the criminal elements of the world now have free reign [sic]. Hospitals and schools are getting crushed and public health is being sacrificed all in service of a radical left anti-borders agenda.Our brave border agents and courageous ICE officers have been illegally stopped from doing their jobs,” the 45th president claimed. Our Nation is now one giant sanctuary city where even dangerous criminals are being cut loose and set free inside the US interior on a daily basis.

What Biden and Harris have done, and are continuing to do on our border, is a grave and willful dereliction of duty.

Biden put Harris in charge of the border, but she has not visited it. She becomes mean and spiteful when anyone asks her about visiting the border.

FBI Director Christopher Wray’s testimony to Congress last week backs up Trump’s claims. He admitted cartel behavior has spilled over the border. We already had reports of cartels preying on desperate people through social media platforms. Other reports said they bribe American teenagers on TikTok to help transport migrants into America.

If only Biden and Harris would go. And stay there.

I hear Gitmo is nice this time of year, Kamala, how about you book a long weekend there??

At this point, everyone knows this woman’s scam: she got where she is by sexually servicing homely old men. Now that’s she’s here, she’ overreached, and has been exposed for what she is: an empty pants suit who whored her way with homely old men up the ladder.

Whoever put her in place overeached, like they did with Obama’s open radicalness – which gave us Trump.

But this: this is different. Harris coming in (ok – get your mind out of the gutter) is a declaration of war against our nation. This utterly talentless and unlikeable hack will be a the complete mercy of the malignant forces that put her in place. And she will do their bidding.

Well if Kamala Harris actually does become President – she will have proved beyond a doubt: You Can Sleep Your Way To The TOP!

The clock on Harris (yes, I said the “clock” – get your mind out of the gutter) is ticking. She WILL become president.

She didn’t sleep her way to the VP position, though she did go heels-high and knee-pads wild getting to her Californication positions.

What’s scary is who thought this grotesque poseur would be the corruptable puppet she is bound to be upon taking the otherwise ignored oath of office? She’ll be desperate and lost. And she’ll be like Stockholm Syndrome puppet for very scary forces working to destroy our nation.

She will have someone telling her exactly what to do and when to do it. The fact that she is incompetent is a feature, not a bug.

Who want to be in that gutter?

The Biden Administration inherited from me the strongest, safest, and most secure border in U.S. history

Ack, fat-fingered the keyboard and posted before I was able to continue the thought:

… but it is not hyperbole to say that, although there was still plenty of room for improvement, Trump had the border situation turned around and moving in the right direction.

What with 50 miles of wall? Not sure exactly what Trump actually did to prevent immigration .

Who want to be in that gutter?

Still more of a President than either of the losers bookending his term.