Border Crisis: Human Smugglers Use Facebook to Connect With Migrants

Border Crisis: Human Smugglers Use Facebook to Connect With Migrants

“The journey is safe and reliable and the price is $4,500 leaving from Monterrey to San Antonio, Texas.” 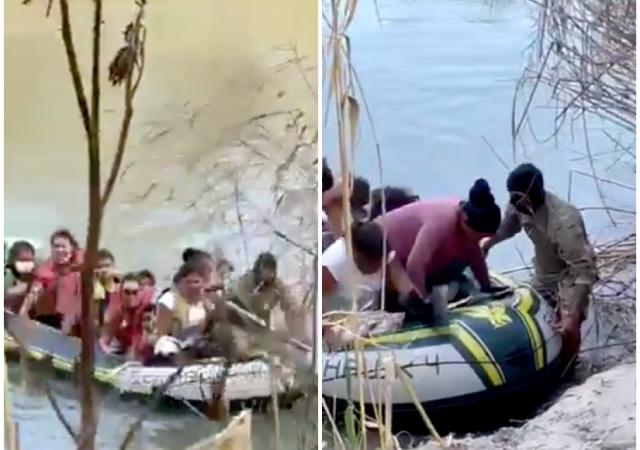 The Department of Homeland Security believes posts by human smugglers on social media platforms have caused the migrant surge at the border.

The smugglers connect with the migrants on Facebook, promising safe passage across the border for thousands of dollars.

“Travel to Mexico to the United States. Costs $8,000. 100 percent safe,” reads a recent post written in Spanish. “Cross through Matamoros. You walk one hour, after in automobile until you arrive to your relative.”

The posts come from smugglers and people who want to go to America:

An apparent smuggler posted a picture of a family with luggage, wearing masks and sitting together on what appears to be a plane. “Make your dream a reality in the United States. We are here to help you,” the caption reads. “The journey is safe and reliable and the price is $4,500 leaving from Monterrey to San Antonio, Texas.”

In some cases, negotiations take place after initial pleas for help from migrants looking for ways to cross the border.

“Someone help me go to the United States,” a person posted to one of the Facebook groups.

It was not long before the post got several comments from people providing their smuggling rates, destinations and WhatsApp numbers.

“It’s ready. 3,000 to arrive at the line/ 6000 to jump to your destination. Whatever state. Pay when your relatives receive you,” an apparent smuggler wrote.

One person asked if the U.S. allows kids to cross bridges. People responded, “Only if they enter alone” and “They are not letting minors with parents pass.”

Immigration lawyer Amy Maldonado blamed President Joe Biden for keeping Title 42, which started in March 2020 under President Donald Trump at the start of the pandemic:

“The Biden administration is forcing this because they kept the Title 42 policy,” Maldonado said, referring to the policy that expels everyone but unaccompanied children. She blamed the policy for encouraging more immigrants to try to cross illegally between ports of entry and to send their children alone.

“I can’t imagine how desperate you must be to trust your children to human traffickers,” she said.

NBC News alerted Facebook, which removed all the posts.

Unfortunately, smugglers using social media to entice desperate people to use their services is nothing new:

Guadalupe Correa-Cabrera, associate professor at George Mason University’s Schar School of Policy and Government, has been studying the correlation between migrant smuggling and social media since about 2019, and the most common platforms among migrants are Facebook and Facebook-owned apps WhatsApp and Instagram.

“When the migrant caravans started to arrive, myself and my team found out that a lot of the communication was done through WhatsApp. … This is the way that people communicate normally,” she told Fox News.

Correa-Cabrera said the smugglers create the WhatsApp account weeks before they form the caravan. They delete the list once they finish the caravan. 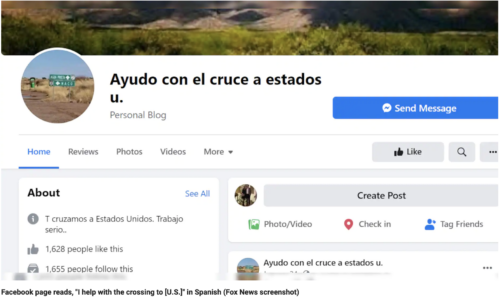 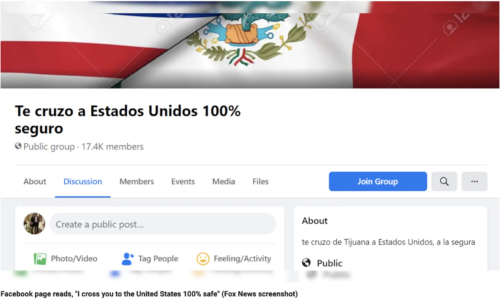 Facebook aiding criminal activity? Give them the Parler treatment and shut them down.

And the sad part is that nothing will happen to Facebook nor The Zuck. He’ll simply claim they cannot do anything about those criminal Facebook pages unless someone reports them to Facebook despite the fact that they seem to have no problem banning/suspending/deleting Conservative pages at the drop of a hat.

NBC News alerted Facebook, which removed all the posts.

Can’t you just HEAR the grumbling in that sentence? Nothing proactive there — a world of difference from when they gleefully and immediately deplatformed the NY Post without having to be prompted, for daring to tell the world the truth about Hunter Biden’s laptop.

I’m shocked! Shocked, I tell you that Facebook (aka The Zuck) is still aiding and abetting criminal activity despite all their (failed) attempts to clean up their social platform of criminal behavior.