Harris gives a long-winded answer. Ilia Calderón is not impressed and asks once again, “Do you have a date for your trip to the border?” 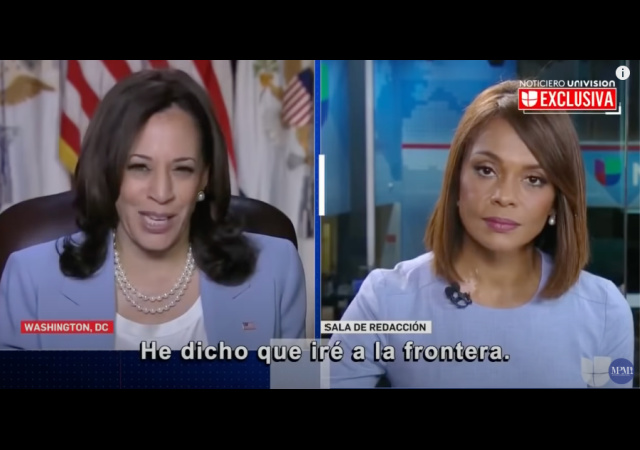 Harris said, “I’m going to the border.” She tried to expand on the answer, but Calderón interrupted to ask for a specific date.

As Harris was speaking, she heard Calderón’s slightly delayed question, which appeared to not sit well.

“Do you have a date for your trip to the border?” Calderón followed.

“I will keep you posted,” Harris replied.

I never thought we’d have someone more unlikable than Hillary Clinton. So fake. So condescending.

God forbid people want to know when you’re going to do your job.

The best part of the interview? Calderón does not hold back her disdain for Harris’s disrespect.

Well one good thing: listening to this weezbag makes me pray for the health of Jill biden, our acting president🙄

Her cloying voice rivals obama’s pretentious whistling ‘s’ when he talks in being nauseating..

Couple that with the constant but arythmic head bobbing and, yes, nausea ensues–and I am not exaggerating: It makes me queasy.

Is it taboo to mention that the reporter is rather attractive? Not just in looks but in attitude and fuerza? Maybe “charismatic” is a better word. Either way, she serves as a stunning counterpoint to the smarmy self-entitlement and grating vocal fry of 3σ left-tail Dunning-Kreuger Harpy Harridan Harris. “Vice” is a well-deserved descriptor.

That whistle was indeed annoying

“I never thought we’d have someone more unlikable than Hillary Clinton. So fake. So condescending.”

If there was a category for “most unlikable, fake and condescending” Harris would be in the Guiness Book of World Records.

It’s her defensiveness – it’s worked when she was relatively under the radar. But her 1 inch depth and low character is out in the open.

Maybe Kamala realizes she is in over her head. Everyone else has. . .

When two women of color have a spat which one is the oppressor? The anchor has power because her producers can cut off the microphone but Harris has power due to position.

Can someone please explain how the rules of the diversity Olympics apply here? Do we need to do DNA tests to determine exact percentages of oppressed ancestry?

Do we examine sexual preferences as well? Does only one or two experiences count? How about household economic standing during childhood? School system? How do we pin down any privilege either benefit from?

Harris has a more manly look – so clearly she is the oppressor.

Nope. That’s too simple. I need a Venn diagram with all contingencies displayed.

Of course the people promoting the decent into tribalism and division by the imposition of their neo orthodoxy likely can’t achieve a consensus of who ranks whom in the hierarchy.

If these ass clowns are willing to sign off on a complete listing then I might be willing to play. I doubt that they can reach agreement so it’s an easy promise.

Good try but she could be transgender….so close.

Harris is darker skinned, so she wins. Unless the reporterette is a lesbian, then she outscores Harris.

You didn’t address the potentially differential impacts of colonialism upon their ancestors and it’s pernicious legacy.

I am holding out for the Venn diagram that addresses all factors in the assignment of privilege points within the hierarchy of oppression and the implications for conflict between persons who each possess claims to multiple disadvantage within that paradigm.

I’m sure some woke PhD is working on it right now as part of their doctoral thesis.

“I never thought we’d have someone more unlikable than Hillary Clinton. So fake. So condescending.”

It is amazing, both have incredibly poor character.

What is it with this litany of utterly vile, manifestly miserable, obnoxious, narcissistic, rude, imperially arrogant, Dhimmi-crat crone-harridans, shrews, termagants and scolds? I’m recalling crone Clinton, crone “Call me ‘Senator’ — it’s a thing I have” Boxer, crone Pelosi, crone Hirono, et al. Too many miserable and vile apparatchiks, to name.

I’d gladly commit seppuku with a rusty and dull butter knife, rather than be forced to share a home and a bed with any of these miserable and noxious crones.

When younhave nothing else going for you, you act like these women.

I recall reporters cutting into Trump’s comments all the time. And no one cared.

Kamel toe thought because she’s who she is this was going to be a cakewalk jib. In fact, it’s her gig she can sleep her way out of criticism.

Bingo. But worries me is that she was put in place with her handlers knowing this. What is their plan, considering?

The question is: why haven’t they? The march in unison, so there’s a method behind the madness. Perhaps to rescue her, having now shown her whois boss. Scary stuff.

Don’t mess with a fired up Latina, it never ends well

That – and cackling and whoring herself – have worked in the past. But that’s all she’s got.

Harris’s rebuttals falls short, ending with an attemptively dismissive “I’ll keep you posting.” I think it’s that she’s in above her head and caught out so often that fuels her constant macro and microagressions.

All she’s got and all she’s ever had is cackles, bitch-mode and sexual services.

Her sexual services have grown too old to be marketablle.

Maybe “I’ll keep you posted.” is th new “circle back”?

Competence AND class!
We’re witnessing the two-fer that earned Kamala that job!
(Not the other two-fer. That’s Russian disinformation.)

All that was missing was the hyena laugh.

It was there, you just have to listen closely.

As the old proverb says, “Wherever the hyena is, it’s laugh is sure to follow..”

I’ve known people like her along the way. She will get her comeuppance.

Before I used a word like that, I’d consider how many people would immediately tell me that it was precisely how she got where she is now.

Certainly mentioned in the beginning of Sundowner, ( here maybe) that keeping our Leftist Propaganda Ministry in line was easy but foreign reporters got no loyalty so the best hard nose questions would come from them.

Prostitute to a prospective john: “You want a lewinsky or a kamala?”

Wait, is there a dog whistle here?
Looking for root causes might suggesting these countries might, maybe, perhaps are, you know, storage tanks for latrines. Like holes that collect fecal matter. The root cause is those countries suck royal farts out of the big ass hole. That’s the root cause.

When KH announces her title as “Vice President of the United States,” instead of mostly just “Vice President,” she shows her inflated self esteem. She really likes to say and hear herself say that. She always said the entire name “President of the United States” instead of mostly just “President.” The long version of the name is technically correct, but nobody else says the long name all the time, except for KH. She is so clueless at how she comes across. People have hated her in every single elected office she’s ever held. And yes, I would agree that Kamala is even more unlikable than Hillary. Shocking!

Some people think Biden purposely named her to the border, to get back at her for pretty much calling him a racist and a misogynist.

I want to see her dragged to the border, kicking and screaming before dawn, and then tossed over the other side. Live on payperview.

Harris has not changed her stripes. She is exactly the same as presented as a candidate with her run for POTUS as she is now as V.P. demonstrated the Dem.’s have gotten exactly who they wanted. VP Harris has sidestepped most all controversial issues with her replies using her infamous snark, condescending and obfuscation. Next to senility, there isn’t a fine hair of difference in coherence. Her standard reply to most issues being “I’m open to discussion”. Asked straight out though on immigration and borders she as a candidate pledged to offer a path to citizenship to the millions of undocumented immigrants living in the US and supporting the decriminalizing border crossings by undocumented immigrants who cross the US border. Now that she sits in that office, she can’t even make the claim to discuss it. She is a fence post sitter holding a wind sock to see which way the wind favors her back.