FBI Director: ‘No Question That the Cartel Activity From’ Mexico ‘Spilling Over’ the Border

FBI Director: ‘No Question That the Cartel Activity From’ Mexico ‘Spilling Over’ the Border

Wray to Congress: “But there’s no question that the cartel activity on the other side of the border is spilling over in all sorts of ways” 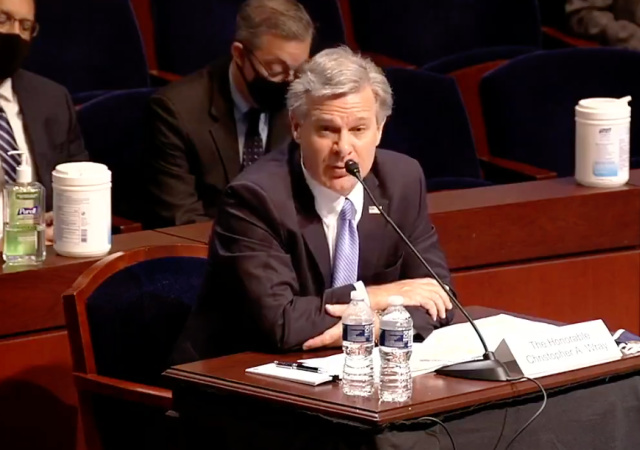 But I thought America did not have a border crisis?

We’ve had reports about the infamous Mexican drug cartels taking advantage of people who want to cross our border.

They supposedly use social media to connect with migrants willing to spend anything to get into America. They also use the platforms to recruit American teenagers to pick up the migrants.

FBI Director Christopher Wray put some truth into those reports:

REP. TOM MCCLINTOCK: Is it true many of the foreign nationals who are being trafficked across our border often arrive here deeply indebted to the Mexican crime cartels?

DIR. CHRISTOPHER WRAY: Certainly we have seen quite a number of such instances, absolutely.

REP. MCCLINTOCK: Are those debts collected through indentured servitude to the cartels?

DIR. WRAY: In some cases, definitely. We are pursuing a number of human trafficking task forces, as well as working on certain taskforces with [Department of Homeland Security] to try to address that issue. But there’s no question that the cartel activity on the other side of the border is spilling over in all sorts of ways, and you just put your finger on one that is extremely concerning to us all.

FBI Director Christopher Wray: “no question” that "extremely concerning" Mexican cartel activity “is spilling over in all sorts of ways” into the United States because of Biden's border crisis pic.twitter.com/xjuCFQaNIs

So, Kamala, when are you going to visit the border? We obviously have a border crisis.

Have you seen what cartels do in Mexico? Don’t need more spillage.

Maybe that’s because the dementia-ridden, retarded pedophile in the White House restarted the whole immigration crisis that a REAL president had sorted.

Nobody in DC cares to stop this.
They welcome the evil.

They welcome the evil votes.

And the democrat party doesn’t care how they get them. But as long as the illegals register “democrat” when they get to this side of the border the democrats are fine with the cartels trafficking in humans.

And you and the FBI that you “lead” are doing what?

This great nation is SO fortunate to have Inspector Clueless and his force of dedicated Democrats on the case.

“So, Kamala, when are you going to visit the border? We obviously have a border crisis.”

Cut her some slack. Last thing she wants to do is make it worse.

After that disastrous Central America trip, it’s gotten a lot harder for anyone attempting to plan a trip for her to the border. What are they going to do? Let her gaze at scores of migrants (children in particular) while the cameras roll? Find some border agents willing to speak to her on camera and say nice things? Maybe some state and local officials? Have her meet privately with some of the migrants while a WH photographer snaps pics? Have a carefully-orchestrated roundtable meeting?

Regardless, if they do get her there I bet any statement(s) she makes to the media will be pre-written and she won’t take any questions. And I wouldn’t be surprised if she’s there and back in the same day.

And another thing: Wherever she would go couldn’t have a wall. Even if there was, if she got reasonably close to the border, that area would be incredibly secure because of the Secret Service, amped-up Border Patrol, state and local law enforcement, and very likely Mexican authorities on the other side. Albeit temporarily, unless they kept up some extra presence afterwards to prevent “Migrants coming across section of border VP visited yesterday”.

I read something recently, and I forgot who said it, is that Kamala doesn’t want any photos from a visit at the border to haunt her when she runs for president. Very bad optics for sure.

Horrifying, but I trust Putin more than this scummy bastard.

Love him or hate him, Putin:

If I had the opportunity, I’d likecto sit with him and talk.

IMO, Putin is an advocate for his own personal power, his public image and longevity. Dictators, even ones ostensibly chosen by the electorate, don’t have any assurance their successors won’t turn them over to a mob or simply arrange an ‘accident’ if convenient.

If his absolute refusal to hold a single person accountable for the FISA lawbreaking weren’t enough, the very fact that the Democrats kept this piece of shit around for Biden should tell you EVERYTHING you need to know about this jackass.

And never forget – McConnell openly threatened Trump that if he tried to fire Wray he would never confirm a replacement.

The RINOs wanted this piece of shit running the FBI.

I truly wonder what Wray does all day at his “job”.
Seems to me, not much.

Whatever his Dimocratic handlers tell him to do.

Who woke Christopher Wray up? I’m sure its white supremacy causing on the Cartel activity on the border.

Come on, Man! She is a bright, articulate BLACK WOMAN that loves this country. Cut the malarkey or I’ll call Corn Pop in to change your mind. Twenty-three Skidoo……..go listen to your record player

It’s always refreshing to hear the Director of the FIB, obfuscate before Congress.

Wray: “Of course they are all white supremacists”