“I’m 52-years-old. I’ve never had to stand up in this way in my entire life. As I’ve said in my tweet, these are the times my grandparents, my great-grandparents warned me about.” 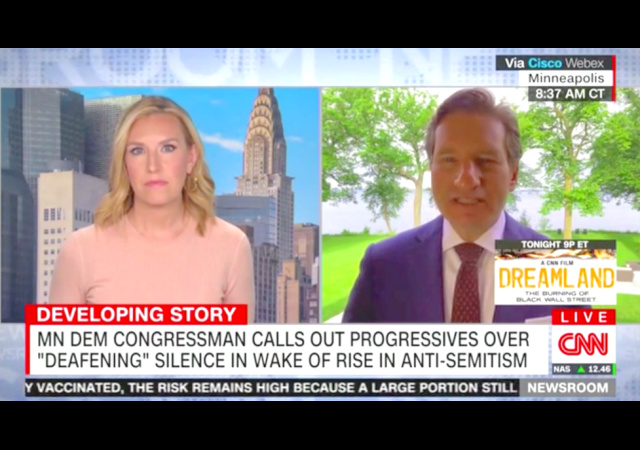 Rep. Dean Phillips (D-MN), who is Jewish, repeated his frustrations on his colleagues’ rhetoric on Israel during a CNN appearance on Monday.

Anti-Semitism has spiked since Hamas attacked Israel, leading to an 11-day fight. Phillips has demanded progressives to stop with their anti-Israel hyperbole all week.

I’ll say the quiet part out loud; it’s time for “progressives” to start condemning anti-semitism and violent attacks on Jewish people with the same intention and vigor demonstrated in other areas of activism. The silence has been deafening.

Phillips wants fellow Democrats and progressives to be consistent when it comes to rhetoric. They claim Rep. Marjorie Taylor Greene (R-GA) and President Donald Trump caused violence with their words and speeches.

“I’m 52-years-old,” Phillips told CNN host Poppy Harlow. “I’ve never had to stand up in this way in my entire life. As I’ve said in my tweet, these are the times my grandparents, my great-grandparents warned me about.”

Phillips wants them to acknowledge their words have caused the same violence they condemn:

“[J]ust as the former president called COVID the China flu, which provoked attacks on Asian-Americans, calling Israel a terrorist state or an apartheid state, you know, to me is doing the same thing to the Jewish community which has been persecuted for so many generations, and it’s time to stand up and ask my progressive friends and colleagues and brothers and sisters to recognize what is at stake here, and to look back in history, not long ago, in Germany, where Jewish people felt as safe as they do in America right now, but these are the signs and signals that are very disconcerting for the community,” Phillips outlined. “And I feel an obligation to point that out and not condemn but invite my progressive colleagues to help us.”

Phillips did not name his colleagues, but only a few Democratic congresspeople spew anti-Israel tweets and speech as much as the Squad: Rep. Rashida Tlaib (D-MI) and Rep. Ilhan Omar (D-MN):

While Phillips did not mention any of his fellow lawmakers by name, Rep. Rashida Tlaib (D-Mich.) — the first Palestinian American woman elected to Congress blasted the Biden administration on the House floor earlier this month for sending money to what she described as Israel’s “apartheid government.”

Amazing how Democrats refuse to admit their party has change dramatically. It is not the same Party representative Phillips joined 30 years ago. He will never make a dent – because the Party has passed him by.

Although Jews make up only 2 percent of the U.S. population, they make up 7 percent of the Congress (9 Senators and 26 Representatives are Jews). So they have quite of clout. If they were to switch parties they could use that clout to help Jewish Americans at time when their very lives are in danger. But they won’t do that because they are all entangled and mixed up in other things they care about more.

Why should they, and ruin their cushy gigs? Just ask Pelosi and Schumer.

Today, a majority of Democrats are on the wrong side of virtually every issue. What happened to them?

Repent the end is neigh.

No it doesn’t. The violence they condemn is completely different because it’s against people they support.

Their words provide support for violence against people they want exterminated.

It’s adorable that he can’t bring himself to say “Trump”. TDS can be just as insidious as anti-Semitism, bro. Check yourself.

Rep Phillips is completely wrong. There has not been silence from the left about anti-semitic violence. There has been resounding applause.

Being a Jew in the democrat party is like being a hen in the fox house.
You can’t make Democrats love Jews any more than you can make foxes love hens. It’s time to run for your life.

And leftists see Jews that way too, up to and including shipping them in boxcars.

They’ll be the first ones slaughtered – after they manage to get the rest of us slaughtered. They are on the level of concentratrion camp Sonderkommando Jews, who clubbed, pushed and threw other Jews into the gas chambers, then dragged their dead bodies out, thinking they’d be spared by the Nazis.

The difference is that there is no actual evidence that President Trump’s rhetoric about the China Flu resulted in anti-Asian violence by his supporters. Just as today, the violence then was perpetrated by members of the political Left or their followers. In other words his fellow “Progressives” are the ones carrying out attacks on Asians and Jews at the instigation of your fellow Democrats. I applaud him calling them out, and calling for them to put a sock in it, but he better be careful or they’ll take away his secret decoder ring and kick him out of the club.

Phillips what’s the currency of Palestine?? Where is its capital?? It’s like saying you’re from New England and the people of Maine owe you.

There was never actually a country called Palestine.

The muslim arabs are taught from day they are born that all Jewish people should be pushed into the sea.

The quran teaches hate for all non-muslims.

There may never be peace in the MidEast.

Rep. Phillips makes 2 specific assertions that sound like Democrat talking points but should be able to be ascertained easily yea or nay.
1. He says he saw Hitler shirts during the 6 Jan. riot. Is it verified that such shirts were present?
2. Does Rep Marjorie Taylor Greene actually tweet Nazi material frequently or is that something that they choose to interpret as Nazi. Because if it is Nazi material for real she needs to go.. But if it’s not, then she needs to be defended and the lies called out.

1. Yes. There was at least one shirt that can be fairly interpreted that way, though it’s possible that it was meant ironically.

2. No. Greene is a nut, but I have not seen anything she’s tweeted that has been either nazi material or antisemitic.

The “Jewish space lasers” thing was not her words, it’s an interpretation others put on what she actually wrote. What she wrote was even nuttier than that, so people trying to make sense of it decided she must really mean to blame the Jews, because at least that makes sense; it’s wrong, but it’s coherent. The alternative is that she was just babbling incoherently, which they dismiss as impossible. But I think that’s exactly what she was doing. She didn’t mean any harm by it, she didn’t mean anything by it.

She does need to go, but at the next election, not earlier. And I can name at least 20 Dem Reps who are nuttier than her.

“[J]ust as the former president called COVID the China flu, which provoked attacks on Asian-Americans, calling Israel a terrorist state or an apartheid state, you know, to me is doing the same thing to the Jewish community

He’s being consistent, and he’s calling on Progressives to be equally consistent, but his premise is wrong.

Attacks on Asians had nothing to do with Trump, and I doubt many of the attacks on Jews have anything to do with anything a Dem politician has said. Antisemites go out to bash Jews because of what they see on the news, or just because they feel like it and hear of others doing the same, not because Omar or Tlaib or Sanders said something.

Why not call it what it is? Calling Israel a terrorist or apartheid state is anti-Semitism in action. Those saying such things are bigots who pretend their prejudice is somehow noble.

Too bad he has had his eyes closed for all these years. It is time to wake up rather than woke up.