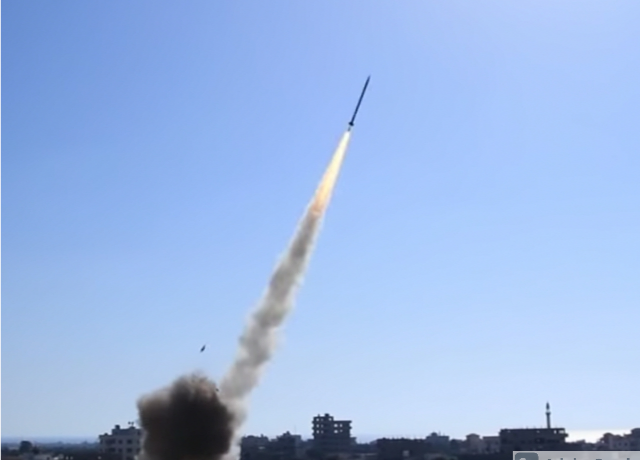 Less than two days after Palestinians rioters on the Temple Mount demanded Hamas to fire rockets at Israel, the Gaza-based terrorist group has launched a barrage of missiles aimed at Jerusalem and other cities in central Israel.

At least seven rockets were fired at the Holy City on Monday evening. One of them landed in the western part of the Jerusalem district, the Israeli media reported. “A rocket struck a house in the Jerusalem suburb of Mevasseret Zion, causing damage but no injuries,” Israeli broadcaster Arutz Sheva confirmed.

Israelis in downtown Jerusalem scramble for shelter after Hamas fires rockets at the capital. #IsraelUnderAttack https://t.co/3gnEPDsbli

A short while ago, thousands of Israelis ran for cover as Hamas fired rockets at civilian populations in Jerusalem, Ashkelon and Sderot. pic.twitter.com/2ZCrUDyPMY

Rocket sirens sounded in central Israel and Jerusalem on Monday evening as thousands of Israelis were parading through downtown to celebrate Jerusalem Day. Hamas had threatened Israel earlier in the day that it would launch the rockets due to the ongoing clashes in Jerusalem.

The IDF said that seven rockets were fired towards the capital and one was intercepted by the Iron Dome missile defense system.

According to reports on Channel 12, an uninhabited building was struck by a rocket and a fire broke out in another community, though it is unclear whether it was because a rocket landed there or just shrapnel.

Both Hamas and Islamic Jihad took responsibility for the rocket fire saying that it was “in response to [Israeli] crimes and aggression against the holy city and harassment of our people in Sheikh Jarrah and the Al-Aqsa Mosque, and this is a message that the enemy should understand well.”

Hamas' Al-Qassam Brigades long-range rockets fired from a civilian area of #Gaza towards #Jerusalem a short time ago. #Israel pic.twitter.com/dPH9OWcjVt

The Hamas rocket attack on Israeli cities comes as Palestinians rioters continue to rampage in Jerusalem. Since the month of Ramadan began on April 13, the weekend prayers on the Temple Mount have been accompanied by attacks on the Jews in the Holy City and violent clashes with the Israeli police.

Palestinian demonstrators near Damascus Gate cheer the sirens and apparent boom of interceptions in Jerusalem pic.twitter.com/1WSAycclkM

The Times of Israel reported Monday’s rioting by Palestinians:

Hundreds of Palestinian protesters and at least 21 police officers were injured throughout Monday morning in fierce clashes on Jerusalem’s Temple Mount, according to medical officials and police. (…)

The Israel Police said rioters had been hurling rocks and other objects from the holy site and launching fireworks at officers, leading them to enter the compound, a relatively uncommon move by Israeli security forces.

FOOTAGE FROM INSIDE #GAZA showing rockets being fired from residential areas toward Israeli territory. #IsraelUnderFire pic.twitter.com/yZFmxcKjj9

On Friday, the Muslim “worshipers” raised the green flag of Hamas on the Temple Mount. They chanted “we are all Hamas,” and called upon the Gaza-based jihadist group to fire rockets into Israel. The Monday’s rocket barrage on Israeli civilians seems to be Hamas’s response to that bloodthirsty call.

Rocket fire toward Jerusalem is a dramatic escalation. There will be a forceful Israeli response. We have a long night ahead of us.

The Israeli military has begun responding to the latest Hamas terror offensive. Three Hamas terrorists were killed after they fired antitank missiles at Israeli civilians from across Gaza. “The alleged targeted killing took place in the northern part of the Gaza Strip, apparently in response to an antitank missile being fired toward an Israeli civilian vehicle,” the Israel Hayom newspaper reported Monday evening.

The Israeli government vowed to respond to the Hamas rocket attacks. “Israel will respond with great force. We will not tolerate attacks on our territory, our capital, our citizens, or our soldiers,” Prime Minister Benjamin Netanyahu said on Monday evening. “Those who attack us will pay a heavy price,” he added.

Children in Israel's south won't be going to school tomorrow. They won't sleep much tonight either.

It's not because of COVID-19. The Jewish state has emerged from that crisis. It's because they're targets of terror groups in nearby Gaza.

Keep these innocents in your prayers.

The southern Israeli city of Ashkelon is said to have come under repeated Hamas rocket fire, with reports of explosions in the city.

🚨The terrifying view from Ashkelon, as Israelis see rockets fired straight at their homes – and are thankfully intercepted mid-air. #IsraelUnderAttack pic.twitter.com/h8bZQhL3b6

Tel Aviv opened bomb shelters to shield residents from the overnight rocket fire. “The city of Tel Aviv and a number of suburbs, including Rishon Lezion and Ramat Gan, have announced that they are opening public bomb shelters amid growing fears that central Israel may also be targeted by rocket fire,” the Times of Israel reported.

Meanwhile violent Palestinian rioters continued to desecrate on the Temple Mount, throwing bricks and stones at Israeli police, and carrying out an arson attack at the scared site.

The Temple Mount is now literally ablaze as a tree catches fire at the holy site.

Police say it appears to have been started after people launched fireworks at it. pic.twitter.com/gZnD2sojgK

It’s interesting how none of this crap happened during Trump’s tenure. When Biden get his old weak behind in office all of the nonsense starts back up.

That’s not true at all. Plenty of this crap happened during Trump’s tenure as well. Hamas don’t give a sh*t about American policy. Unlike Fatah, they’re not interested in influencing America, and they know there’s nothing America can give them and nothing more that America can do to them, so they do whatever they like.

Of course, we’ve heard nothing from the White House. The president may want to put down his pudding and plastic spoon and issue a statement.

In the meantime, any thought of Isreali politics moving away from Bibi just ended.

Um, no, it didn’t. None of this helps Netanyahu. He’s not out of the game yet, but for now he’s down. It’s pretty clear that although there’s a clear majority in the country for right-wing policies, half the country hates him and is tired of him and wants him out if possible. They don’t want a left-wing government, but they do want someone who is genuinely on the right, not someone who pays lip service but is really interested in nothing but himself, and will sacrifice literally anything if he can squeeze a little advantage out of it for his own career, and for staying out of prison.

People here on LI seem to have this idea that Netanyahu is some sort of selfless person dedicated to keeping Israel safe and furthering the zionist dream. He certainly talks that way, but he proved 25 years ago, during his first term in office, that his actions don’t match his words and really he’s a complete squish. I don’t understand how people who get upset at people like McConnell, Graham, McCain, Boehner, Ryan, etc. can turn around and worship Netanyahu, who is them times ten.

“Netanyahu is some sort of selfless person”

He is a politician, usually they are a lower form of life.

Israel has honorable politicians, or at least principled ones, who mean what they say and actually stand for the policies they proclaim. Netanyahu is not one of these. Compared to him McCain was a rock-hard conservative, as is Murkowsky and Collins.

israel has not commented on whether the missiles are m-302 variants or not(chinese designed but some are actually manufactured in syria)–if so, then believe the israelis will be compelled to destroy those at the source rather than mid-flight–faster with considerably more destructive power and, importantly, more accurate than the garage-built garbage hamas normally fires–they have brought things to a much more dangerous level

All this is over some Arabs who have been squatting in private property for over forty years, refusing to pay the owners rent, and the left-wing Israeli judiciary looked like it had finally run out of excuses for not issuing an eviction order, so they rioted and now the Supreme Court has delayed its decision in order “not to inflame” the mob.

Hopefully the IDF manages to bring the bastards to justice and manages to do so with a minimum loss of life and without the usual demonization that accompanies Israeli retaliation.

A pathetic, incompetent corrupt clown named Kamala Harris is soon going to be the captain of the American ship.

The world is going to become buck wild fairly soon – and China will make military moves the likes of which we never imagined.