Chinese Foreign Minister Wang: “China will not accept … that any nation will have a final say on world affairs.” 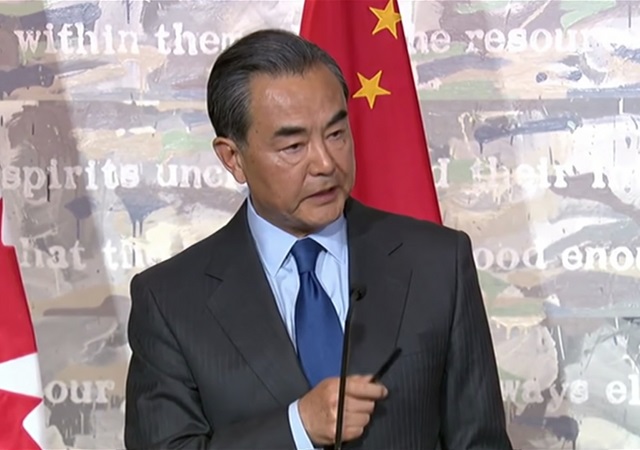 “China will not accept that there is any nation in the world that [can] put itself superior to the others, and that any nation will have a final say on world affairs,” Wang Yi said. “If the US continues to confront, China will take it calmly without fear.”

Chinese Foreign Minister Wang Yi has warned the United States not to take a superior position and presume it has a final say on global affairs.

Wang said China would not accept a list from Washington of unilateral demands for negotiations with Beijing. “The door for dialogue with China is open. But the dialogue should be done on equal basis and with mutual respect,” he said.

“China will not accept that there is any nation in the world that [can] put itself superior to the others, and that any nation will have a final say on world affairs. If the US continues to confront, China will take it calmly without fear.”

Wang was speaking to Chinese state media about his recent meetings in Fujian province with foreign ministers from Singapore, Malaysia, Indonesia, the Philippines and South Korea. He said he had briefed them on the Alaska summit between US and China diplomats, telling them it was “reasonable for regional nations to be concerned about China-US relations”.

The warning comes less than three weeks after the Chinese foreign minister insulted and intimidated the Biden State Department officials at the bilateral summit in Alaska. With President Biden at the helm, the U.S. does not “speak to China from a position of strength,” he declared.

The remarks also come when Beijing is intensifying military aggression against U.S. allies in Asia and the Pacific.

On Monday, neighboring Taiwan reported a new incursion by Chinese fighter jets into its airspace.

“Taiwan’s Defence Ministry said four Chinese J-16 and four J-10 fighters were involved, as well as an early warning plane and anti-submarine aircraft, the latter of which flew to the south of Taiwan through the Bashi Channel that connects the Pacific to the South China Sea,” Reuters reported Monday.

Japan and India are also in the cross-hairs, with Beijing making claims over their territories. In the latest series of provocations, China has sent a carrier group near Okinawa. The Okinawa region is home to several large U.S. bases.

“China sends aircraft carrier strike group near Okinawa in message to U.S. and Japan,” The Japan Times daily reported on Tuesday. Beijing dispatched “an aircraft carrier and five escort ships, including a destroyer likened to the U.S. Navy’s Aegis-class vessels, through the Miyako Strait near Okinawa over the weekend in a signal of its growing ability to counter American and Japanese military power further from its shores,” the newspaper added.

The Indian newsweekly India Today reported on Sunday that “China’s plans to rapidly militarize Tibet” region, making India’s Himalayan frontier vulnerable to further Chinese attacks. Tensions flared up last May after the deadliest border clashes between the two countries in more than fifty years took place when the Chinese army invaded India in the northern Himalayan region, occupying a strategic valley in the Kashmir region.

The U.S. does not “speak to China from a position of strength,” Chinese Foreign Minister Wang tells Secretary Blinken.

Yes Mr. Xi, we’re sorry. We know our place and won’t do it again.

China owns Biden, Pelosi, Schummer, the GOP elite, the State Department, DOJ/FBI, the Judiciary, US manufacturing, Apple, Google, Twitter, MLB, NBA, and the NFL. It won’t be long until they control the apple pie market, too.

I know how Mr. Trump would respond. But we’re stuck with the “we surrender to our communist masters” administration.

You will know the War has started when your Debit Card quits working. Hopefully, your electricity will stay on. I fully expect China to attack the US in a non-kinetic manner.

Make sure that you have checks on hand. Cash is better in case the Chinese zero out your bank account.

Communist only back down when confronted with strength?
What the hell did China ever do to the USA except provide affordable consumer goods and buy billions in agriculture from the USA and be the biggest customer Boeing ever had

Cost of Chinese products have been horrific.

What would Trump do go to war with China ?
Or perhaps cut off all trade with China the worlds largest and growing consumer society
How would that help USA ?
USA already 30 years behind China in infrastructure and is heading fast towards a third world status .
Best they focus on the problems they have at home

Communists only back down when confronted with strength. Were Donald Trump still POTUS, this would not be happening.

Communist only back down when confronted with strength?
What the hell did China ever do to the USA except provide affordable consumer goods and buy billions in agriculture from the USA and be the biggest customer Boeing ever had

Perhaps you might look at the history of the Korean Peninsula.

Theft of intellectual property which the government of China admits by the way.

Providing a slave labor force to corporations so that they move production to China. Admittedly it two to tango and I am personally more PO with corporate leadership than China on that front.

There are other examples which demonstrates the lack of seriousness in your argument that China is pure of motive and of action.

That’s the problem with a puppet regime. Everybody thinks they’ll own Punch, but sometimes they end up with Judy.

Oh joy. Our class of elite progressives are embracing another rendition of failure theatre. Coming soon a region confrontation with the pawns supplied from those pesky red state, rural, bitter clingers who remain committed to traditional American values.

The elites might offer the occasional token sacrifice to military service but really now what do rubes expect? These pampered children of privilege have a large investment in their intersectional degrees from the ivy League and are far too busy employed at hedge funds to serve in time where bullets and missiles are flying.

Nope the elites diplomacy will fail at anything not approaching an abject surrender at which time, having failed.to respond from a position of strength they will send your sons and daughters into harms way only after giving away any strategic advantage we might now have.

The Chinese are right USA last country to tell others how to run their countries.
With the endless wars and killings of innocents USA along with their puppet master Israel are without a doubt the largest terrorist state in the history of the world .
And then to have the nerve to make up a cock and bull story about china being mean to its Muslims ?
You would have to be brain dead to believe the lies USA puts out

I have an idea, Biden should appoint Barack Obama as special envoy to China. He can show our strength by bowing so low he can grab his ankles as he presents his best side to Chairman Xi.

The kicker being that the Wuhan-Flu-China-CCP 🇨🇳 never takes anything “calmly”.

The CCP 🦠 and its trolls , like the virus are everyhwere.

Armies of CCP minions work across Western social media to stuff the narrative.

A nation built on the planetary loot of others labour will surely not last long.

Where is the Western left talking about CCP imperialism ? MIA .

A good source of China aggravation is Sky News Australia 🇦🇺 on YT.

If you disagree you are a “racist”.