China Taunts Biden Admin at Alaska Summit: U.S. Does Not “Speak to China From Position of Strength”

China Taunts Biden Admin at Alaska Summit: U.S. Does Not “Speak to China From Position of Strength” 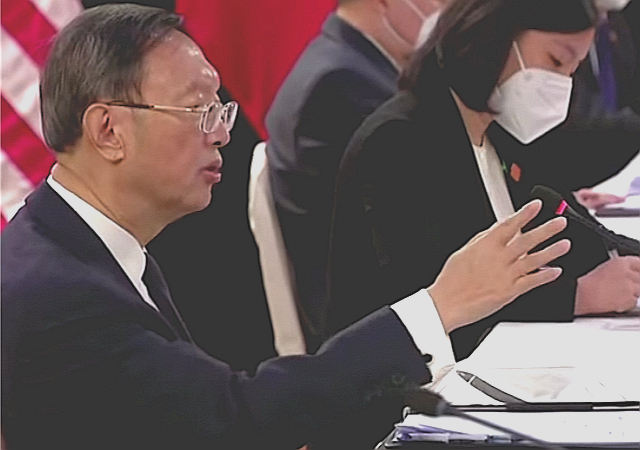 All hopes of “resetting” the U.S.-China relations went down in flames as Chinese delegates heaped insults at the President Joe Biden’s team at the two-day bilateral summit in Anchorage, Alaska.

In first direct talks between Communist China and the Biden administration, the Chinese side accused the U.S. of bullying, military aggression and “deep seated” racism.

Not stopping there, the top CCP diplomat suggested that the Biden administration was negotiating from a position of weakness. “Let me say here that in front of the Chinese side, the United States does not have the qualification to say that it wants to speak to China from a position of strength,” he told Secretary of State Antony Blinken and the U.S. delegates.

The Associated Press reported the car crash summit hosted by the Biden administration:

In unusually pointed public remarks for a staid diplomatic meeting, Secretary of State Antony Blinken and Chinese Communist Party foreign affairs chief Yang Jiechi took aim at each other’s country’s policies at the start of two days of talks in Alaska. The contentious tone of their public comments suggested the private discussions would be even more rocky. (…)

Blinken said the Biden administration is united with its allies in pushing back against China’s increasing authoritarianism and assertiveness at home and abroad. Yang then unloaded a list of Chinese complaints about the U.S. and accused Washington of hypocrisy for criticizing Beijing on human rights and other issues. (…)

Yang responded angrily by demanding the U.S. stop pushing its own version of democracy at a time when the United States itself has been roiled by domestic discontent. He also accused the U.S. of failing to deal with its own human rights problems and took issue with what he said was “condescension” from Blinken, Sullivan and other U.S. officials.

“China will not accept unwarranted accusations from the U.S. side,” he said, adding that recent developments had plunged relations “into a period of unprecedented difficulty” that “has damaged the interests of our two peoples.”

’There is no way to strangle China,” he said.

Blinken appeared to be annoyed by the tenor and length of the comments, which went on for more than 15 minutes.

While China showed utter disdain for the weak foreign policy stance taken by the Biden administration, Secretary Blinken congratulated himself and the White House on the new diplomatic approach undertaken after four years of Trump presidency. “I’m hearing deep satisfaction that the United States is back, that we’re reengaged,” he declared at the summit.

The administration tried to downplay its failure by calling the meeting “substantive, serious and direct.”

If U.S.-China relationship is the “biggest geopolitical test of the 21st century,” as the Biden administration itself touts, the White House failed miserably in the first round.

The BBC described the summit hosted by the Biden team as an “unusually undiplomatic sparring match.” Even the sympathetic CNN admitted that it was an “inauspicious start to a new era of relations.”

The performance given by the Chinese delegates is both for the domestic and international audience. With President Biden in the White House, China is openly talking of becoming the world’s sole superpower. Earlier this month, Beijing unveiled a 15-year plan to overtake the U.S. as the world’s leading economic and geopolitical power. This follows a major push to modernize the Chinese navy and armed forces by 2027, aimed at challenging the U.S. and the allies in Asia and the Pacific.

Rather astounding how China and Russia are treating us.

I take they did not much care for Trump, but they were not supposed too. At least they seemed to respect him. Biden… not so much.

Standard communist rot as China plays with the debilitated admin. They pulled their strings on the Puppet Prez.

Actually, Russia has just been a little kinder to the Bi-Gone Prez. Haven’t seen the Dems diss their Asian masters like they tried with Putin and Russia.

Mark Levin played clips from this tonight.
Chinese use Democrats talking points on the Democrats

Why not? The Democrats are more anti-American than ether the Russians or the Chinese.

From my understanding, this is not an unusual way for Chinese to open a negotiation or engagement. They unload a laundry list of your dirty laundry in the opening.

I don’t know it’s true intentions whether it’s to put the other party back on its heals or to show they have the moral and positional high ground, or just an ape like chest pounding to start the engagement, but it’s not unusual from what I have read (some Kissinger era stuff).

I also don’t know the most effective opening to counter with- whether it is to call them on their shit or to absorb punches or to use some other Jiu Jitsu to neutralize it. Obviously president bumble-mouth doesn’t know either and unlike me with zero diplomatic responsibility, he hasn’t given it two seconds of thought. Might as well have sent a child in there.

I’m surprised the Chinese didn’t lash out about the media narrative that Asian American’s are being targeted by white yokels. On that topic, our idiot school district jumped on that same narrative in a letter to parents… BLAMING the rub and tug shop murders on racism.

This is not how the Chinese conduct negotiations. They are normally very circumspect. Starting negotiations is difficult because the spend a lot of time felling you out and want a personal understanding first. They avoid contentious issues if possible. This makes Americans think they are rather duplicitous and not straight forward. The do not like to “lose face,” nor place others in that position as it places them in a non-recoverable position, that is, places both parties at more or less permanent conflict. The party giving offense has to give first to restore the honor slighted.

What yo describe sounds more traditionally Russian, which is, “You are evil and terrible. Give me that who loaf of bread.” Then the “compromise” by taking only half of your loaf of bread. Then the demand the other half you just thought you had retained in negotiation. Very simialar to how Democrats work.

But what really is important is what does the purple haired girl sitting next to the American SOS have to say about this!

No it’s purple and even Biden was appalled. The news is all over it

America takes a knee in progress.

“Let me say here that in front of the Chinese side, the United States does not have the qualification to say that it wants to speak to China from a position of strength,”

Seriously? Our sec of st is Blinken?
Where’s Wynken and Nod?
Guess that would be Barack Joe

Speaking of crocodiles (as I just was)…

Blinken needs to give it right back at them. Theft of intellectual property, concentration camps for Uighurs, lack of freedoms. But as usual Democrat will apologize and beg China to be nice.