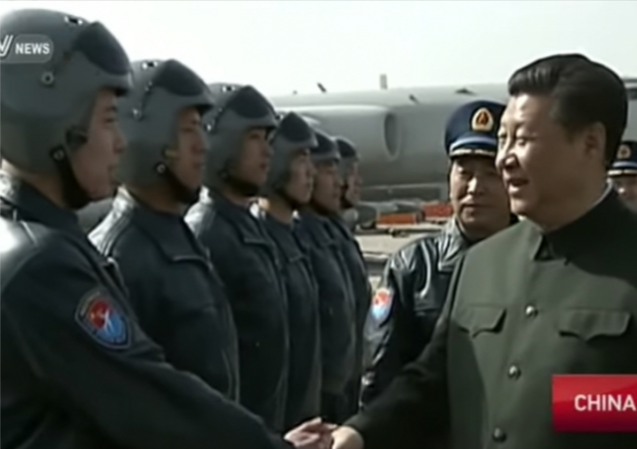 As Joe Biden enters the White House as the 46th U.S. president, Communist China has intensified military tensions with Taiwan, carrying out a large scale incursion into the country’s airspace.

China’s unprovoked aggression against Taiwan, a trusted U.S. ally, is surprising in the light of President Xi Jinping’s promise of a “win-win cooperation” with the incoming Biden administration. Since November, China and Biden’s team have been in ‘backchannel’ talks towards a ‘reset’ in U.S.-China relations after four years of Donald Trump’s presidency, Chinese media reports say.

China views democratically ruled Taiwan as its own territory, and has in the past few months increased military activity near the island.

But China’s activities over the weekend mark a ratcheting up with fighters and bombers being dispatched rather than reconnaissance aircraft as had generally been the case in recent weeks.

After eight Chinese bomber planes and four fighter jets flew into Taiwan’s defence zone on Saturday, between mainland Taiwan and the Taiwan-controlled Pratas Islands in the South China Sea, a further 15 flew into the same air space on Sunday, Taiwan said.

In recent months, Communist China has repeatedly threatened to invade Taiwan, an independent country which Beijing considers a breakaway province.

The Taiwan incursion comes as Beijing authorized its coastguards to fire on foreign ships detected in “disputed waters.” Chinese Communist Party delegates passed a new law that allows the country’s “coastguards to launch pre-emptive strikes without prior warning,” Chinese media reported on Saturday.

“Improving joint operation capabilities necessary for the most likely combat scenarios for the PLA, such as a campaign against Taiwan,” the newspaper reported citing Chinese sources.

The South China Morning Post covered the details of the PLA war games.

China’s military is increasing its use of joint operations and officer cross-training to boost its readiness for war, according to insiders quoted in a newspaper report.

A five-year overhaul of the People’s Liberation Army (PLA), which ended last year, saw the restructuring of the command chain to make cross-service combat a basic approach for future operations.

Weeks after congratulating President Biden on his election victory, Xi Jinping ordered the Chinese armed forces to maintain “full-time combat readiness.” The Chinese military must be ready to “act at any second,” he told the troops in early January.

These are not empty threats. In June 2020, China invaded Indian territory, occupying a strategic valley along the Himalayan border. Chinese military continues to build and fortify illegal artificial islands in the South China Sea, creating a formidable defensive wall and a launchpad for offensive operations.

With President Trump out of office, and the West reeling from the Wuhan virus pandemic, Communist China believes that time has come to rise as the world’s number one superpower. The “changes of the international landscape are in our favour,” declared Chen Yixin, a senior Chinese Communist Party official and Xi Jinping’s likely successor, earlier this month.

We’re not fooling ourselves. We know Joe won’t honor the treaty protecting Taiwan.

According to public broadcasting, and CFR specifically, Biden will oversee reestablishing old alliances. China is an ideological partner and a friend with “benefits”.

And just like that, the world knows a puppet is running DC.

Looking to get some value from those Hunter Biden payoff’s somehow. Looks like it’s working well so far.

China’s planes should have been shot down. That is what it will take to make China back off. They are more or less the same as school yard bullies.

And just like that, the world knows who is running things. (And it ain’t Slow Joe and the Ho).

Sooner or later we’ll hear that the Usurper has withdrawn all American naval forces from the S. China Sea.

And he may not even be aware he signed the order to do that.

The Chinese Communists are testing the strings attached to their new bought and paid for puppet. AKA, China “I don’t know what I’m signing” Joe.

But all is well in Amerika. We’re on day 6 of no annoying tweets from POTUS.

Biden has already composed his strongly-worded protest in response to the CCP occupation of Taiwan.

China has been prepared for war for 30 years. But, the CCP realize that war is a last resort.

China has been seeking global domination for the last three decades through economic warfare. They have been expanding their influence through economic channels and agreements. Their aggressive military actions serve three main purposes.

The first purpose is to instill a certain amount of fear in the world community. If the world is afraid that the PRC may engage in aggressive military action against major nations, which it never really does,they are more likely to acquiesce to their economic desires.

Third, such military action assuages the military class. It is done to placate them and maintain their support for the CCP, domestically.

With the current administration in Washington, China is emboldened. The danger here, is that a reaction from Taiwan or another country being threatened by China, may actually trigger a war that no one wants.

I believe the Chinese when they say they want “win-win cooperation” with the Biden administration. The mainland Chinese get to take over Taiwan, and they continue to pay off members of the Biden family. As long as you’re not living in Taiwan, it looks like everyone wins.

This makes me wonder what the military would do if Slow Joe tells them to stand down if Taiwan is attacked. Have they been infiltrated sufficiently (as is the intelligence community)to follow or would they revolt? I fear that the Swamp has swallowed up everything.

If they dont obey, they’ll face a tribunal of men wearing dresses.

Our military has its guns pointed in the wrong direction.

One fake election is all it took.- that and the treasonous cooperation of the GOP.

With the current administration in Washington, China is emboldened. The danger here, is that a reaction from Taiwan or another country being threatened by China, may actually trigger a war that no one wants.
____________________________________________________________
agree to an extent except the CCP now knows well that Biden will do NOTHING to prevent China’s adventures–would not be surprised at an outright invasion of taiwan and, should that occur(more like when), the prospects of china joe doing anything are virtually zero–the world knows we have a bought/paid for idiot in the WH–and the CCP will simply isolate taiwan

With a traitor in its pocket in the White House – and a simple, corruptable whore right behind him – this is China’s time to dominate the world.

Taiwan, Japan, Australia, S. Korea now have no choicw but to build a nuclear arsenel and form a dwfense pact independent of the Xi-controlled Junta running the former US. With Austin-fauci tasked with hunting down Christian scum in the military – and biden bringing back transvestites to the military – no free nation can depend on the former US ever again. In fact, they would do well to look upon the Junta here as an enemy, allied with Xi.

Yep. Those countries should already be looking at making nuclear weapons. It’s the only thing that will keep China at bay if the US under Biden refuses to act.

Please stop identifying flights in a country’s air defense identification zone as incursions or violations of airspace. An air defense identification zone (ADIZ) is airspace over land or water in which the identification, location, and control of aircraft is performed in the interest of national security. They may EXTEND BEYOND A COUNTRIES TERRITORY to give the country more time to respond to possibly hostile aircraft. The concept of an ADIZ is NOT DEFINED IN ANY INTERNATIONAL TREATY AND IT IS NOT REGULATED BY ANY INTERNATIONAL BODY. On the other hand, Airspace is the portion of the atmosphere controlled by a country above ITS territory, including ITS territorial waters. By international law, a state “has complete and exclusive sovereignty over the airspace above its territory”, which corresponds with the maritime definition of territorial waters as being 12 nautical miles out from a nation’s coastline. Airspace not within any country’s territorial limit is considered international, analogous to the “high seas” in maritime law. Intrusion into an ADIZ is legal. Intrusion into airspace by “hostile aircraft” isn’t.

RED CHINA HAS NEVER OWNED TAIWAN… IT HAS NO REAL CLAIM…