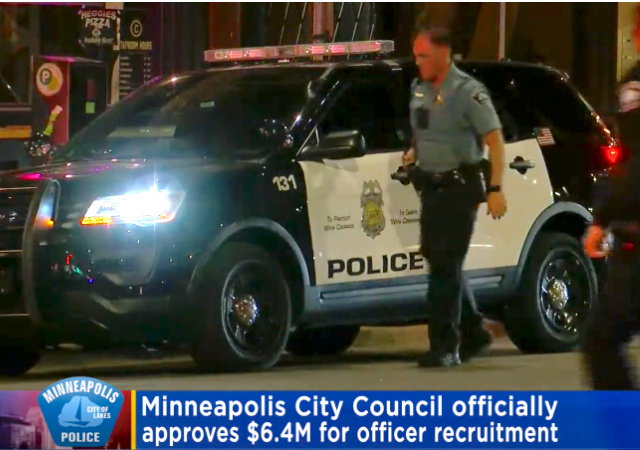 The Minneapolis City Council voted to defund the police department after George Floyd’s death. To the shock of no one, crime went up in the city after many left during the protests.

Remember when Minneapolis City Council President Lisa Bender claimed the ability to call the police over a robbery “comes from a place of privilege?”

From the Star Tribune:

Minneapolis police said they began the year with 817 officers on their payroll, 60 fewer than the previous year. But, only 638 officers are currently available to work, the department said. Some officers resigned or retired early in the year, while another 155 remain on some form of extended leave.

With the new recruit classes, the city expects it will have 674 officers available to work at the end of the year, and another 28 working their way through the hiring process at that time.

An unprecedented number of officers quit or went on an extended medical leave — many for PTSD claims — after Floyd’s death, rioting that led to the burning of a police precinct, and calls to end the city’s Police Department.

Citizens have begged the city council and other leaders to hire more cops. With so few, many have seen longer response times to reported crimes.

The city council began to change course in September.

In December, the members did not completely defund the police, but moved $8 million from the department “toward violence prevention, mental health response and other programs.”

The council also formed the Public Safety Staffing Reserve Fund. They gave it $11.4 million for overtime and recruit classes, but “can only be released with additional council approval.”

The city council voted to release the $6.4 million on Friday night.

Days before the City Council vote, Mayor Jacob Frey and Police Chief Medaria Arradondo promised to update the application process for police recruits to include questions about whether they have lived in Minneapolis, have degrees in criminology, social work, psychology or counseling, and whether they volunteer or participate in programs such as the Police Activities League.

But groups have not stopped pressuring the city to replace the department with a “public safety department:”

Meanwhile, three City Council members have proposed replacing the police department with a public safety department that would include law enforcement and other services. Yes 4 Minneapolis, a coalition of local community groups, is also collecting signatures to try to get a similar proposal on the November ballot.

The Star Tribune reported the Yes 4 Minneapolis committee is being fueled by a half-million dollar grant from the Washington, D.C.-based group Open Society Policy Center, linked to billionaire George Soros.

The petition would remove police department language from the city’s charter and create a public health-focused Department of Public Safety, “including licensed peace officers if necessary to fulfill the responsibilities of the department.”

I don’t need to see the ledgers to know this little stunt was probably very costly and wasteful.

Running off a bunch of people then trying to hire more will probably have a good bit of inefficiency costs to it. It’s almost always cheaper to retain quality employees at jobs that require extensive training than cycle through them.

Of course, this was probably a feature, not a bug. Run off a bunch of “racists” (their term, not reality) and replace them with a bunch of “woke joke cops” (my term, not theirs).

When an experienced employee leaves, all that experience goes with them. You cannot “train” it into the replacement.

Minneapolis will most likely join that parade of cities that disrespect the police and drive the experienced officers away. The enhanced recruitment and training brings in new folk who soon learn how screwed up the place is and they take that training to another, more professional department. Some departments contractually bind the new kids to a minimum time of service, holding repaying the cost of training them over their heads. Minneapolis will degenerate to a force of seasoned officers no one will hire away from them and rookies. Not a good mix for public safety.

Exactly right. (I was a seasonal cop in CO and WA for 29 years.)

New police hires have to go to the academy for 4-6 months at the expense of their new department (salary + cost of academy). Then the rookie will have to ride double with a Field Training Officer for some period of 2-6 months. So the department will have invested at least a year’s salary in the rookie before they get any actual shift coverage from him/her. Small departments often don’t have the money for that.

That’s where the big, rich departments in anti-police cities are useful. Here in WA, that means Seattle. Portland and Minneapolis are the ones in their states. After the academy, Seattle (and most other places) require the rookie to work there for at least 2 years. Many or most Seattle cops lateral into less hostile departments as soon as their commitment is done. So Seattle serves as a major training ground for all the departments in the state.

But that means that Seattle has the least-experienced police force, plus they pay 3 years salary and expenses to get 2 years of work out of their rookies before they leave. It means they’re paying 1.5 times the actual salary for each year worked. Since Minneapolis either fired or drove off most of their experienced cops, it will be at least a year and a half before they can replace them on the street. Replacing them will be very expensive, and I expect that most of the rookies will lateral into less hostile departments ASAP.

I bet many rookies will look elsewhere. Watch over the next 20-30 years as Seattle goes the way of Detroit. People are already leaving, Seattle is circling the drain.

am not familiar with law enforcement hiring practices but if anything similar to our industry, can always hire untrained people, semi or marginally qualified people, slackers, warm bodies, etc

the most difficult individual to find is one that cares–it’s not only the money, it’s what they want to do

those people(in my experience)are the ones that are worth whatever you have to pay them to get them on board–if you’re going to invest in people, that’s where i’ve always put my money and have never regretted a hiring decision with an individual like that

but lord, how many people are you going to find in a city like minneapolis that truly care?–would you want to risk your life every day in the ordinary course of business?–would not myself(given a choice)–would seem a nearly impossible task to recruit quality people to enforce the law in that city–when the work is dangerous to begin with, how do you hire good people that know (besides the very real chance of getting injured/killed)the city government is opposed to them, a large segment of the population is belligerent and hostile towards them, they have no support with the da’s office and could reasonably expect to do time in prison for the practical necessity of defending themselves in their line of work?

just don’t see it–after many of these “touchy-feely” new recruits get their heads knocked/blown off, believe the community will understand it’s the policies that are wrong/backwards, not the police

I am cynical enough to think that this was purposeful. Might the leadership not want to replace good, experienced officers with poorly trained, lower quality officers?

And open themselves up to more legal liability when one of those poorly trained recruits severely harms/kill someone.

Burning down cities is big business for Dems.

They don’t have to pay legal liabilities for bad policing, and they can gin up a bunch of campaign contributions and embezzle some money from a bail fund for rioters.

I put the same search into Duck Duck Go and it returned propaganda rather than results concerning many black lawyer’s organizations trying to cancel Officer Wilson.

Treatment of Zimmerman caused me reevaluate my support for black causes, subsequent cases firmly cemented my belief that all Affirmative things should be killed.

People who persecute others on this scale do not deserve any perks or exceptions.

I think that deserving blacks will do fine on their own, and I think thatOfficer Wilson really cared.

I put the same search into Duck Duck Go and it returned propaganda rather than results concerning many black lawyers organizations trying to cancel Officer Wilson.

Treatment of Zimmerman caused me reevaluate my support for black causes, subsequent cases firmly cemented my belief that all Affirmative things should be killed.

People who persecute others on this scale do not deserve any exceptions.

I’d hate to be a cop in one of these cities who has put in enough time that they would lose a lot by leaving. The over 10 year guys that can’t retire.

I was a beat cop. I couldn’t deal with working in such an environment. I was used to getting crap from my “clients”, but to get the same crap from our “leaders”. No thanks.

The cops feell the same way.

Yes for turning Minneapolis into another urban nightmare like San Francisco if it isn’t already. Then they can make it worse, SF’s malignant DA Boudin is another Soros “alumnus”.

” Remember when Minneapolis City Council President Lisa Bender claimed the ability to call the police over a robbery “comes from a place of privilege?” ”

I’ve read survey evidence that what people of color with children or businesses overwhelmingly want in their neighborhoods is the privilege of being able to call the police and get a timely response. That’s just like the white ones.

One would almost think that having a family and having a business are more relevant to a person’s attitude toward the police than a triviality like skin color.

Silly council. If you are smart look elsewhere for employment.

Minneapolis voters: you deserve every misery and every inch of destruction that has come your way.

Other questions the new police applicants will be asked:

Are you now or have you ever been a Trump supporter?
Have you ever read a posting on 4Chan or 8Chan?
Do you believe in QAnon?
Do you admit that white people are responsible for all the problems in Minneapolis? (Note: A no answer will disqualify you from further consideration).
Where were you on Jan 6?

“Police officer. Duties: act as a prop and a target, at the whim of an insane city council and mayor. Unhappy, dangerous, humiliating working conditions. But at least it’s not New York, right? Contact City of Minneapolis: 612-673-3000.”

What a stupid policy, it seems to me a badly thought out set of policies. Moving funds across to other policies which have the nominal aim of reducing mental health issues and drug issues etc take a lot of time and effort to make work. That means that if you want to reduce the amount of officers you have to wait for your other policies to make an impact.