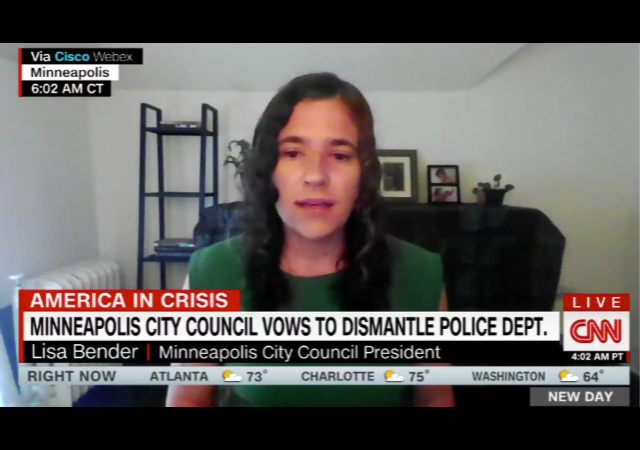 Following the death of George Floyd and the subsequent riots in Minneapolis, members of the city council declared they would dismantle the city’s police department.

Unsurprisingly, this policy has not worked out well for the city so far, and crime is on the rise. Who could have predicted such a thing?

Now some members of the city council are backing away from this ridiculous policy.

Some members of the Minneapolis City Council may have regrets regarding the controversial pledge to dismantle the city’s police department made after the death of George Floyd in May, according to a new report.

After conducting interviews with multiple council members who voted to approve the pledge, the New York Times’ report reveals that the vow may not be as firm as previously thought.

Council member Andrew Johnson, who supported the pledge in June, told the outlet that he meant the words “in spirit,” not by the letter. Meanwhile, Council member Phillippe Cunningham said the language in the pledge was “up for interpretation.”

Council President Lisa Bender added that she believes the pledge “created confusion in the community and in our wards.”

Some relatively moderate council members, like Linea Palmisano, chose not to take the pledge, telling the Times that the council has “gotten used to these kinds of progressive purity tests.”

In a text message obtained by the Times, Palmisano outright objected to the move.

“I’m not taking any pledge, if that means people throw bottles at me then fine,” Palmisano wrote.

Does everyone remember when the president of the Minneapolis City Council claimed that having police was a form of privilege?

In a just world, the city council would be dismantled.

This outcome was entirely predictable, and for many who live in Minneapolis, a huge relief as well. The New York Times describes the collapse of the abolish-the-police mission by the city “a case study in how idealistic calls for structural change can falter.” It’s better described as yet another reminder that sloganeering doesn’t replace actual governance, and what happens when politicians react to activists rather than talk to their own constituents:

Over three months ago, a majority of the Minneapolis City Council pledged to defund the city’s police department, making a powerful statement that reverberated across the country. It shook up Capitol Hill and the presidential race, shocked residents, delighted activists and changed the trajectory of efforts to overhaul the police during a crucial window of tumult and political opportunity.

Councilor Andrew Johnson, one of the nine members who supported the pledge in June, said in an interview that he meant the words “in spirit,” not by the letter. Another councilor, Phillipe Cunningham, said that the language in the pledge was “up for interpretation” and that even among council members soon after the promise was made, “it was very clear that most of us had interpreted that language differently.” Lisa Bender, the council president, paused for 16 seconds when asked if the council’s statement had led to uncertainty at a pivotal moment for the city.

“I think our pledge created confusion in the community and in our wards,” she said.

Shortly after the city council called for disbanding the police, some members hired private security for themselves at taxpayer expense. What more would you need to know?

I’m less inclined to define it as “rethinking” and better term it as:

….after they have blood on their hands…..

Biden and Harris plan to “reimagine public safety” just like the Democrats are doing in Portland, Seattle, and Minneapolis!

To Take Any Questions From Press…

It is hard to put into words how monumentally stupid these people are. It’s practically impossible, actually. 2020 has revealed who/what they are. If they are re-elected, these cities/communities get what they deserve.

notamemberofanyorganizedpolicital in reply to CKYoung. | September 29, 2020 at 1:16 pm

Methinks the term is “evil.”

At this point, it’s actually much more probable to assume that they are engaged in executing a conscious Cloward-Piven strategy, rather than to assume they could be this abysmally stupid while still remembering how to breathe.

If only there was some way they could have known liberalism fails every time its tried. Guess history wasn’t enough.

There are those that learn by hearing/reading.

There are those that learn by watching.

Then, there are those that have to pee on the electric fence for themselves.

Sadly, there are some that even the electric fence can’t seem to teach!

Councilor Andrew Johnson, one of the nine members who supported the pledge in June, said in an interview that he meant the words “in spirit,” not by the letter.

The may be the most blatant display of abject cowardice I’ve seen in a good long while. Backtracking while pretending not to. What a weenie.

I can just see Tammerlane saying after the sack of Delhi, “Hey guys, when I ordered 80,000 human heads to be piled into a pyramid, I meant ‘in spirt,’ not for real!” Fat lot of good it would do.

From the first time I heard it, I’ve been impressed by the utter meaningless of the concept.

How did this get here?

No, this is perfectly consistent with principles of Democrat governance.

“I am in favor of an assault weapons ban, in theory. But my aides tell me that ‘do what I mean’ isn’t good enough for a law, and I had to come up with actual words describing what was and wasn’t illegal, and no matter what I wrote, it just didn’t do what I meant.”

Mathematically, stupidly has no lower bound. It runs to infinity. A Biden/Harris administration will none the less try and prove it.

It’s just too doggone hard to pander to the criminal element for their votes AND be a law & order type at the same time.

“Mathematically, stupidly has no lower bound. It runs to infinity. A Biden/Harris administration will none the less try and prove it.” – Not so. Here’s proof.
Go find a rock & a Minneapolis City Council member. Measure the brain activity of both. You’ll discover that they’re exactly the same, which establishes the lower bound of stupidity. QED.

I think you just insulted rocks.

That’s an artificial bound. They can be ‘dumber than a rock.’

No, that’s the lower bound of intelligence. But it isn’t even the upper bound of stupidity. True stupidity is an active thing, like all those arsonist/rioters who managed to set themselves on fire

Where is Maxine Waters and her “IMPEACH, IMPEACH” when we need her ?

“Nobody told us there would be riots, looting and mayhem if we did this!”

“Literally everyone told you there would be riots, looting and mayhem if you did this.”

“Nobody worth listening to!”

Then, they have a moron as a governor. And, a smart but evil AG.

A mess all courtesy of the Democrat (DFL in MN) Party’s 50 year reign.

Yes, indeed. On its onw, a rock will do no harm unless used by a stupid person. Therefore, stupid people are dumber than rocks. Hence the saying.

Everyone who votes to put these “progressive” dingbats in power deserve everything they get. This Bender dope is an absolute useless moron who couldn’t manage a lemonade stand, but as long as she uses the correct buzzwords and platitudes people will think she’s brilliant.
Idiocracy is 100% real, but it’s come wrapped not in mouth-breathing TV-watching sloth but in master’s degrees from Berkeley in “urban planning.”
Own it, Minneapolis. You brought this madness upon yourselves because you genuinely believe that your dyed in deep blue “D” is a sign of your greatness, your moral and intellectual superiority.
Yet you prove time and again that you’re nothing but spineless kowtowing simpletons and incompetents. You honestly think that if you call out “BLACK LIVES MATTER!” at knife-point as demanded by some feral street thug that you’ll emerge admired and unscathed. Well, how does your city look now, you feckless dopes?

I thought Lisa Bender was a man.

Lisa Bender always looks like she’s on some type of SSRI medication. One side effect of SSRIs is emotional flattening in about half the people who use them.

They should kick her out and elect Bender Bending Rodriguez. They would still have all the fire and destruction, but the parties would rock a lot harder.

A policy and movement founded on a clearly false foundation with progressive consequences… one step forward, two steps backward.

1) They proposed it.
2) Within the ideological boundaries of their Party [which exclude reality] they argued and debated it.
3) They voted for it overwhelmingly.
4) They now want to claim “King’s X”, and that all the above really don’t count.

None of this was imposed by the outside, but was their free choice. It is their problem.

The lady boy in charge is all you need to know.

“Council member Andrew Johnson, who supported the pledge in June, told the outlet that he meant the words ‘in spirit,’ not by the letter. Meanwhile, Council member Phillippe Cunningham said the language in the pledge was ‘up for interpretation.’” Sadly, most politicians (especially Democrats) view their oath in the same fashion.

After all, Bill Clinton told us that the meaning of “IS” was debatable.

Every teenager’s excuse: “But it wasn’t SUPPOSED TO end up like this!”

Alexa, what is foresight?

As residents of Minneapolis interested in affairs of that city, the members of the City Council should have been aware that the allegations of racism against MPD for George Floyd’s death did not make sense, given the example in 2017 of a Minneapolis cop killing a civilian. I refer to the Minneapolis cop of Somali origin who killed a white female who had called 911.

The City Council was, to put it kindly, not thinking straight.

If there is confusion, it reside between the ears of the city council members.

What would Jaja Binks say?

Councilor Andrew Johnson, one of the nine members who supported the pledge in June, said in an interview that he meant the words “in spirit,” not by the letter.

What does that even mean? Either they meant what they said, or they didn’t. If their defense is “We meant it, but not literally”, that sounds exactly like the excuse Trump supporters make when he says something wrong. Except that in this case it’s not even plausible, because they started the process of amending the city charter to allow the MPD to be defunded, and that only makes sense if they wanted to do so literally.

Another councilor, Phillipe Cunningham, said that the language in the pledge was “up for interpretation” and that even among council members soon after the promise was made, “it was very clear that most of us had interpreted that language differently.”

Please enlighten me as to what other interpretation is even possible.

“We just want these loud, dangerous people to think we agree with them so they’ll go away.”

Lisa Bender, council president:
“I think our pledge created confusion in the community and in our wards,” she said.

No, it created clarity in the community and in the wards.

Of course they could always go to their ‘Fall-Back’ position and recruit a whole mob of SOMALI REFUGEES as Police, give ’em a gun and see how many innocent Aussies they can shoot! That’ll fix it!