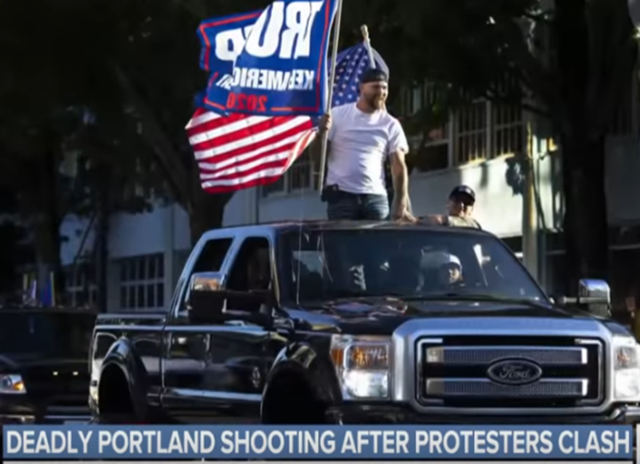 Yesterday, a band of Portland-area supporters of President Donald Trump organized a car/truck caravan to drive through the area to express their support for the President.

Antifa and BLM counter-protesters harassed the group, and one of the Trump supporters was shot and killed in the resulting conflict.

Officers responded to fights, disturbances and collisions throughout downtown and made some arrests Saturday night, police said. By about 8:30 p.m. local time, the caravan of vehicles, part of a Trump rally held at Clackamas earlier in the day, had left downtown. The shooting took place about 15 minutes later.

Photos from the scene showed the victim wearing a Patriot Prayer hat. The right-wing group has involved in several demonstrations in the city. Patriot Prayer leader Joey Gibson told The Oregonian he had seen the photo but did not say whether he knew the person.

“I have to figure out what the hell is going on,” Gibson told the newspaper.

Trump urged local leaders to call in the National Guard. Residents of Portland and other cities led by Democrats are disgusted with their leadership and with top Democrats in Washington, Trump said.

Of course, you would have to dig deeply if you relied on the elite news media to determine that the victim was a conservative activist. The headlines run by the American press are less than transparent about the incident. 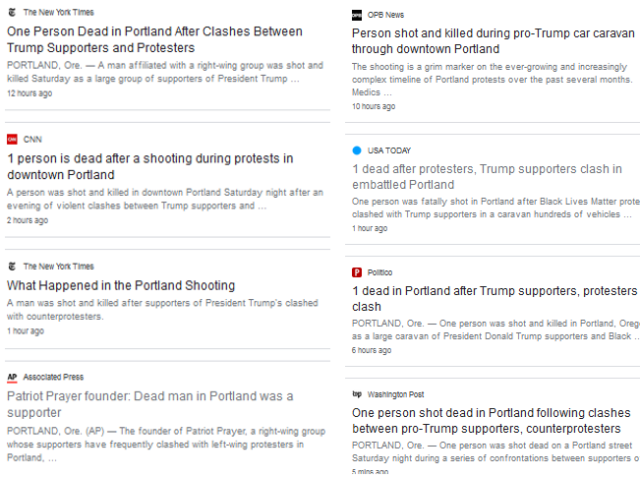 However, news of the death has spread quickly through social media. Given the Democratic Party’s penchant for instructing followers to challenge Republicans and “get in their faces” and the support presidential candidate Joe Biden and his VP pick have previously given the “protesters,” the continuing mayhem and crime spree has now been tagged #BidenRiots.

Why aren’t all the blue checkmark “journalists” tweeting this clip out? Why isn’t it being played non-stop on CNN?

What’s taking so long for Biden to condemn last night’s murder at the Portland #BidenRiots? Waiting too long means you support violence. (I learned that from CNN, so it must be true.)

New York Times reporter doubles down and blames the “far right” for the violence and misery that Biden supporters have brought to our communities. #BidenRiots https://t.co/5AwpGUKqYH

A Trump supporter was shot and killed in Portland

The mainstream media is refusing to put that in their headlines!

It’s target on our backs because we support President @realDonaldTrump

This is why Bluecheck Dems are freaking out and trying to silence anyone who brings up the #BidenRiots pic.twitter.com/fC6AEdbNTy

As the American press obfuscates the incident with hazy headlines, conservatives are forced to share details with proper context provided . . . paired with a powerful new hashtag to get the message across.

The test for a Democrat is whether the narrative was advanced by this death. Without that frame of reference, the death means nothing to a Dem. Thus, their sickening silence.

Also, Portland appears to want this war to continue till November. It is like WWI – a war of attrition. The Dems are hoping for Trump to send in the Army so they have a campaign narrative. They can wait. The price is paid by the Police and the good citizens – both counterrevolutionaries they are.

notamemberofanyorganizedpolicital in reply to TX-rifraph. | August 30, 2020 at 5:02 pm

This article does a good job of explaining that.

Let It All Burn (Or Not)

The guy was planning on making Napalm, which is a simple mixture of petroleum distillates and styrene.

Now Wheeler is afraid that this murder will be a flash point, that people who are sick of woke may well go in and kick the crap out of these clowns.

History shows Its the Leftist way or no way, and they don’t go away quietly.

Portland Mayor Ted Wheeler has spent the last 90 days trying to find somebody that will accept his heartfelt surrender. At his news conference today, Wheeler has blamed the Portland violence on President Trump’s failure to join him in surrendering to the Marxist insurrection.

Did he throw a note out a window. I thought the Dem jackels had him cornered in his condo…

Naw, it was all kabuki theater. They left on their own late in the evening.

To be fair, if all Biden watches is the MSM, he would have no idea that there is anything other than peaceful demonstrations going on.

The only thing Biden is watching are reruns of Matlock. ?

I think that re-runs of “Flipper” would be more his speed these days.

The nicest thing you can say about Ted Wheeler is that he’s doing a high wire act. Trying to keep order in a city that doesn’t want order kept but will still toss it’s mayor out on his ear if things get out of control. If he wants to keep his job, he needs to crack down on the protests w/o appearing to do so.

The city consists of hundreds of thousands of people with homes, jobs, and families. They want order kept — but haven’t yet figured out what they can do to restore it.

People’s preferences regarding such things are often ill-defined and contradictory.

“Not being accosted, burned, or shot” is a pretty popular preference.

Sure, but in Portland there is a widespread delusion that this can be achieved w/o a willingness to meet violence w/ violence. Mayor Wheeler has the unenviable task of keeping Portlanders safe w/o shattering their delusions.

I cannot imagine what you have been watching or reading that leads you to believe Wheeler wants the riots to stop and Portland has been “under control”. You live in a fairy land of make believe.

If I’m not mistaken, Saturday’s killing is the first death resulting from the Portland protests. Also, there hasn’t been widespread looting of businesses like in some other cities. Things are bad in Portland but they could be a whole lot worse.

Right along with the Schumer shutdown. (insert expletive) the left overplayed its hand again.

I think at this point it’s entertainment for everybody, participants and the media audience both. The questions are about what it’s best to say for your own campaign, if you’re a politician on one side or the other. And that’s about what women will think, mostly. The best presentation wins.

At the moment the dems are in a corner. It’s not playing well with women.

notamemberofanyorganizedpolicital in reply to rhhardin. | August 30, 2020 at 10:56 pm

The Communists and their stenographers in the Joseph Goebbels media want you dead or enslaved.

It really is that painfully simple.

My wife follows a bunch of crafting channels on social media.

You’d think there’d be some zen in crafting right? Nope- many of them have gone to full throat hate. One wrote this multipage diatribe that is about the most bigoted hateful thing you could imagine with a single target: anyone who votes for Trump.

— Donald Trump Jr. (@DonaldJTrumpJr) August 30, 2020
—————————————————–
Someone took the tweet down.
It was tweeted out by Steve Scalise and showed the dems and the hate speech they’ve been spewing for months.
I see someone posted the video was marked “manipulated media”.