President “Get in their faces” Finds Campaign Rhetoric Divisive

President “Get in their faces” Finds Campaign Rhetoric Divisive

Time for our monthly scolding. 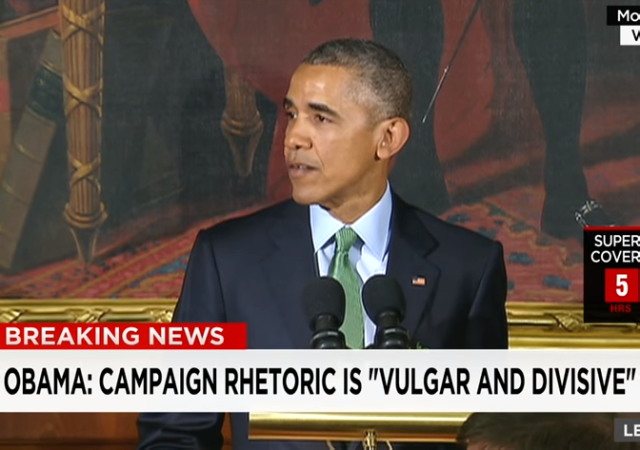 It’s amazing to see a politician who urged his supporters to argue with others and get in their faces, who told people to vote for revenge and whose party called Republicans hostage takers and terrorists suddenly concerned about political rhetoric.

President Barack Obama said Tuesday he was dismayed by “vulgar and divisive rhetoric” directed at women and minorities as well as the violence that has occurred in the 2016 presidential campaign, a swipe at Republican front-runner Donald Trump that also served as a challenge to other political leaders to speak out and set a better example.

“The longer that we allow the political rhetoric of late to continue and the longer that we tacitly accept it, we create a permission structure that allows the animosity in one corner of our politics to infect our broader society,” Obama said. “And animosity breeds animosity.”

Without mentioning the GOP candidate by name, Obama used a unity luncheon at the Capitol to express his concern with the nation’s political discourse and the protests that have escalated to attacks at the Trump rallies. The candidate has spoken of barring Muslims from entering the country and deporting immigrants living here illegally.

Obama pleaded for civility and said political leaders can either condone “this race to the bottom” or reject it.

“We have heard vulgar and divisive rhetoric aimed at women and minorities, and Americans that don’t look like us or pray like us or vote like we do,” Obama said at the annual Friends of Ireland luncheon.

Obama also emphasized that efforts to shut down free speech were “misguided.” Protesters forced Trump to cancel a rally in Chicago on Friday. He said he rejects “any effort to spread fear or encourage violence or shut people down while they are trying to speak.”

Obama loves nothing more than to pretend to be the reasonable adult in the room but his contribution to the anti-free speech movement of the left and on college campuses is undeniable.

It is also unfair of him to blame everyone for the current climate in our political environment. Conservatives are not disrupting Clinton or Sanders rallies. That behavior is only coming from one side.

Perhaps if Obama cared about divisiveness and civility two, four or eight years ago, we wouldn’t be in this place now.

…we create a permission structure that allows the animosity in one corner of our politics to infect our broader society,” Obama said.

What Obo the Clown won’t admit, is that it’s his divisive brand of liberalism that’s infecting this country.

rinardman, nor will the media ever admit it. They’re big players in the narrative also.

I would quibble with the term “liberalism,” as used here.

Liberalism does not stand for violent or even rude thugs threatening people for daring to peaceably attend a rally or express their thoughts.

These people are fascists, and they are following the Marxist playbook, which involves suppression of other points of view and enslavement of the general populace.

The US was the quintessential liberal country, and what we now call Conservatives are the ones who are trying to preserve our wonderful Liberal traditions.

As if Obama Pro-choice in Chief was not bad enough, there is Obama Emoter in Chief with a hypermorality detached from reality, that is actually the religion authored by emanations (i.e. “gods”) from the darkest fringes of a penumbra.

Based on Obama’s shenanigans as an Illinois state senator and his non-voting and voting record on the Illinois “Infants Born Alive Act”, there is nothing “Pro-Choice” about him. He is “Pro-Abortion” to the rotten core and would rather the federal government shutdown over a budget battle than Planned Parenthood not receive its funding.

It’s just no fun if it’s not HIS rhetoric that’s making people mad, if it’s not his thumb poking in the eye of the American public. On the bright side, he only has 309 days remaining in office; on the other hand, we still gotta try and survive him for another 309 days.
Let’s just hope he keeps the title of WORST EVER for himself.

He’s not going away after January 2017. He’ll continue to create problems for the next 25-30 years.

It is hard for me to say this about anyone, and there are few people who qualify for this statement, however, there is not one, single redeeming quality about Obama. Not a single one. He is truly a worthless individual.

And Lucien is right. He’s not going away in 2017. He will be around for a long time. Thus, the reason for the continued fundraisers. The only saving grace will be that he cannot sign any more executive orders or appoint any more worthless judges to the bench.

As Manasseh found out, Babylonian captivity may change you, but the damage you did to your society during your reign will not go away easily. . . If at all.

Agree fully, Obama is not going away. My prediction is that he aspires to be Secretary General of the United Nations – World Leader, Savior of the Planet – better to free its oppressed; to lead us from the ways of war, rancor, and discord; to save the planet from consumption and wanton destruction of its natural resources; to show us all The Better Way. The principal players in the UN today are mirror images of his primary followers and supporters here, on a global scale. They are corrupt, entitled, and dishonest, and include some of the world’s most notorious despots, dictators, tyrants, and thieves. Condition of the world he’s left behind notwithstanding, he’s a shoo-in.

“She really wanted Florida and Ohio, specifically North Korea — North Carlina I should say, was always, was always one of her goals,” Blitzer said.

Violence from the left is nothing new. Heres one take on how Reagan handled it compared to Trump.
https://www.youtube.com/watch?v=XWi1B_lyd7s

Here is a speech by Trump where he had hecklers.
https://www.youtube.com/watch?v=r-mNeY1_GsQ

I thought it was in Kansas City, but have been told it was Wichita.
Here’s the Kansas City speech.
https://www.youtube.com/watch?v=owSn8IYQUks

The speeches are presented in full, but in each case, the interesting part is at the beginning, when the protesters try to disrupt the rally. Trump’s response is masterful, and may I add, far gentler than Ronald Reagan’s, both verbally and physically.

Meanwhile, yesterday’s San Diego Union-Tribune huffed that Donald Trump should say something to discourage violence by his supporters, as if the violence was coming from them.
http://www.sandiegouniontribune.com/news/2016/mar/14/will-someone-die-today-at-trump-rally/

So: in the past few days, I have found the secret of Trump’s appeal: His speeches are far better than his debate performances. When he talks on a subject, he comments on it from different angles, and includes several sides of the same issue. He’s reasonable. Then, somebody tries to take any one sentence out of the lot, and pretend that this is ALL of what the man said. Meanwhile, his supporters aren’t fooled, because they either were there or can get video, and they know better.

Barack Obama can take swipes at him all he likes, but with the whole country able to cross-check his comments, and Trump’s actual speeches available, he can’t get away with it so easily.

There is at least plausible deniability that “get in their faces” was a hyperbole, that all Obama wanted was for his supporters to get argumentative.
Trump is not quite nuanced. “I’d like to punch him in the face” or “in the good old days he’d be carried out on the stretcher” or “Be careful Bernie my protesters will come to your rallies” or “If I don’t get the nomination, there will be riots”, etc., etc., etc. are threats.
And two wrongs don’t make a right.

If it takes a bloodbath. Let’s get it over with. No more appeasement-Ronald Reagan. Maybe Obama’s following the rhetoric of Reagan