Biden became visibly agitated when Savannah Guthrie noted the impeachment process “has ensured that everyone knows about Hunter’s dealings with Ukraine.” 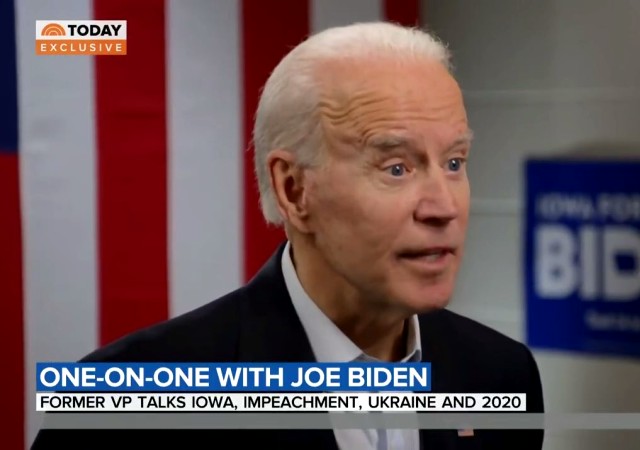 Back in October, when Joe Biden called for President Trump’s impeachment, I speculated that one of the reasons for him doing so was to attempt to regain control of the frontrunner narrative he’d lost.

In the back of my mind, I also wondered if Biden’s call for Trump’s ouster would ultimately come back to bite him. After all, impeachment and the Senate trial that would inevitably follow would keep the Ukraine issue and his role in it front and center in the minds of voters, even those who don’t follow politics too carefully.

Fast forward into 2020, and we see that’s precisely what’s happened. Biden’s campaign is continuing to stumble and fumble to shore up existing support. In the meantime, Sen. Bernie Sanders is surging ahead of Biden and Sen. Elizabeth Warren in both national and state polls.

At the forefront of it all? Impeachment. Ukraine. Hunter Biden. And not just questions about what Trump has said and done, but also Joe Biden’s part in all of it as well.

It’s well known the mainstream media throws softball questions to Democrats regarding Joe Biden’s admitted role in the firing of the former Ukrainian prosecutor who just happened to be investigating Burisma Holdings at the time Hunter Biden was a board member. However, some reporters and liberal commentators have acknowledged that at the very least, the whole situation gave off the appearance of wrongdoing, if not more.

It was exactly that sentiment that Today show co-host Savannah Guthrie had in mind during a Sunday interview she did with Biden while he was out on the campaign trail. During the short segment, the topic turned to Hunter Biden and Ukraine, and the 2020 Democratic candidate for president became visibly agitated when Guthrie noted the impeachment process “has ensured that everyone knows about Hunter’s dealings with Ukraine:”

The former vice president was asked by Savannah Guthrie during an interview on NBC’s “Today” show about the “irony” surrounding Trump’s allegations against Biden himself and the claims being amplified during the impeachment proceedings.

“It’s a good thing that no one’s found anything wrong with his dealing with Ukraine except they say it sets a bad image,” Biden said in the interview broadcast Monday.

Seconds later, Guthrie pressed Biden on if it was right for his son to take the board of directors position knowing it was likely due to the energy company wanting more access to his father and President Obama:

Joe Biden snapped at NBC’s Savannah Guthrie in a Monday interview, saying she didn’t know what she was talking about after Guthrie asked the former vice president if his son Hunter Biden was hired by a Ukrainian energy company to gain access to the Obama administration.

“Well, that’s not true,” Biden retorted. “You are saying things — you do not know what you are talking about. No one said that. Who said that? Who said that?”

“Don’t you think that it’s just one of those things where people think, well, that seems kind of sleazy,” Guthrie said. “Why would he have that job if not for who his father was?”

“Because he’s a very bright guy,” Biden responded, before later adding that his son is a “grown man” who can “speak for himself.”

This isn’t the first time Biden has snapped at someone for probing more in-depth into the Ukraine/Hunter Biden controversy. He called an Iowa voter a “damn liar” back in December when the self-proclaimed Warren supporter brought up the issue:

“You’re a damn liar, man. That’s not true. And no one has ever said that,” Biden shot back.

He’s also lashed out at Fox News reporters for asking questions about his role. He had a meltdown in October when one reporter asked him how Hunter Biden working for Burisma at the same time Biden was in charge of Ukraine policy was “not a conflict of interest:”

"How was your role as Vice President in charge of policy in Ukraine and your son's job in Ukraine, how is that not a conflict of interest?"

Biden: "I'm not going to respond to that!"

What is he hiding? pic.twitter.com/jbycKLARhE

This whole issue has backfired spectacularly on Democrats but especially on Biden. By dramatically calling for Trump’s impeachment and then consistently being dodgy and belligerent with reporters anytime they go near the subject of Ukraine and his son, Biden has only invited more questions about the who, what, when, where, and why even from media outlets that are usually friendly to Democrats.

He has no one to blame for this but himself.

Biden could have also said to the reporter … “This will go away if you just let me grop you.” After all, Biden just oozes sleaze with everything he touches.

I’m no Savannah Guthrie fan but I gotta say she was wholly unprofessional using the word “sleazy”. Further, I’m even less of a fan of Biden’s but even I’d be pissy if confronted with such a poor excuse of a question/answer session.

It has been so long since she has asked a Democrat a tough question that she has forgotten how to do it right.

Just pray that the scales keep falling off her eyes.

Joe Biden’s mistake is losing his temper. Jeez, what a tell. I would love to play poker with him.

Yikes, rough crowd today. I think this is a first for me, getting more down votes than up. Oh well.

I don’t know about you, but when my kids ‘didn’t do anything wrong,’ I don’t get all pissy when people ask me about it.

I hope Lyndsey follows through on his promise and starts an investigation soon into this stinking mess. It’s payback time, big time.

Maybe add the China payoff too? The amount dwarfs the Ukrainian payoff but then again, they have more money.
That’s the way Communists work, those that have more, pay more.

Simple question for anyone with the wit and wisdom to investigate. How many “tax payer dollars” were laundered through Ukraine into the pockets of politicians and their relatives?
(That includes Democrats and Republicans alike.)

I’m not going to respond to that…..BTW what is that intoxicating shampoo you use and does it work on hair plugs?
if I could sniff my own hair I could avoid a lot of trouble.

So is it ok for a political party to try to impeach a president for investigating possible criminal wrongdoing of one of their own?

They keep saying it’s been debunked or nothing wrong was found but doesn’t that come at the end of an investigation and not before the start?

I want to know how much of my hard earned money was taken from me to funnel into joe bidens pockets.

“It’s a good thing that no one’s found anything wrong with his dealing with Ukraine except they say it sets a bad image,” Biden said in the interview broadcast Monday.

Joe continues to frame the issue as being about his son’s behavior and insists that Hunter did nothing wrong.

But the real issue is what Joe himself did to help his son get that plush job and then to quash an investigation into the corruption the company was involved in.

I wouldn’t be surprised if, by the end of this primary campaign, somebody gets tired of Gropey Joe’s tough-guy act and punches him in his lying fucking mouth.

That would clearly be assault – but what class? Aggravated? … and battery? I propose a novel class for such occasions: commendable.

Joe’s one card to play was middle road squish electability. It was a fake card as calling him a moderate just means less crazy in his party. However, Dems were believing it and that’s what would have mattered. After this Ukraine stuff came out, his fake card got torched.

Sleazy?!? Just ask him about his newest grandson. That’ll get a rise.