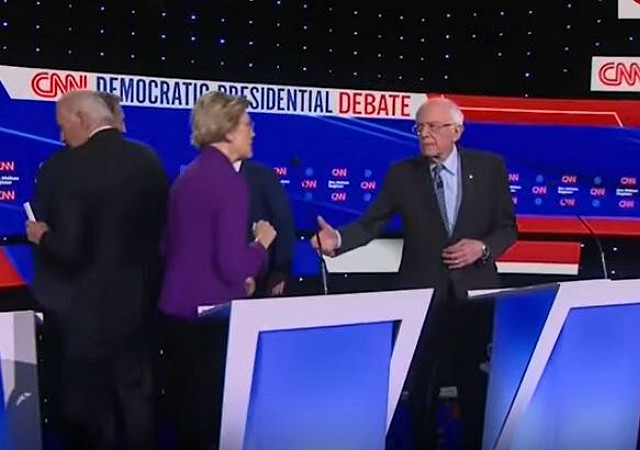 Who knew that the most dramatic and intriguing moment of Tuesday night’s Democratic presidential primary debate would happen in the immediate aftermath?

Most of us watching the debate from the cheap seats were looking forward to how Sens. Elizabeth Warren and Bernie Sanders would address the he said/she said reports from CNN on who allegedly said what at the now-infamous December 2018 meeting. The two senators made a non-aggression pact of sorts with each other in advance of announcing their respective presidential candidacies at the meeting.

But if you turned off your TV as soon as the debate was over, you missed the best part. As all of the candidates were respectfully giving back pats and shaking hands with each other, Warren turned to walk towards Bernie, who extended his hand out to shake hers.

Except Warren drew back from his attempted handshake and appeared to admonish him sternly. Sanders, in turn, seemed put off by what she was saying and gestured a few times with his hands animatedly before walking off the stage.

Watch the intense moment below:

“This is not warm and cuddly.”

CNN’s @DavidAxelrod reacts to a seemingly chilly interaction between Sens. Warren and Sanders just moments after the conclusion of tonight’s #DemDebate. pic.twitter.com/8hSc8IHaft

Unfortunately, what exactly was said isn’t known to anyone, but Warren and Sanders (and probably Tom Steyer, though he’s not saying anything useful), but the body language spoke volumes: 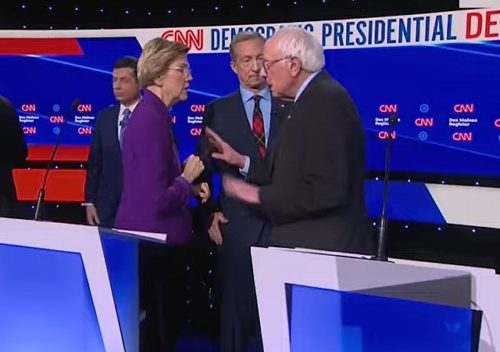 Speculation is at a fever pitch that Warren likely was not pleased that Sanders (again) denied saying a woman couldn’t be elected president when asked about it by moderator Abby Phillip. She then predictably took Warren’s side of the argument when asking her to respond.

Most people reading this are probably not Bernie fans, but I think after watching that exchange and how CNN handled it that most would agree the fix was in from the start. Case in point, this chyron: 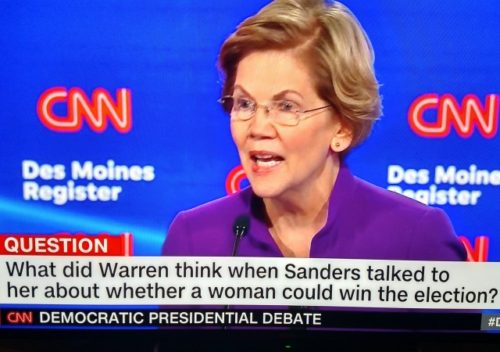 Bernie Sanders supporters are seriously angry about how moderators asked questions on the “sexism” issue and the optics of Warren’s snub. Overnight, #NeverWarren, #WarrenIsASnake, and #CNNisTrash all trended on Twitter:

We watched you stab a “good friend” of 25 years in the back tonight, then refuse to shake his hand. Why should anyone believe anything you say ever again? #NeverWarren

Elizabeth Warren will never get my vote. I don’t care if she’s the nominee. Warren is weaponizing her identity just like Hillary did and it’s disgusting. #WarrenIsASnake #NeverWarren

Warren is now the biggest threat to the progressive movement, the biggest possibility of a Biden nominee, & the biggest chance of four more years of Trump. I went from loving her, to being cautious of her, to being #NeverWarren. Backstabbing liars have no place in this movement. 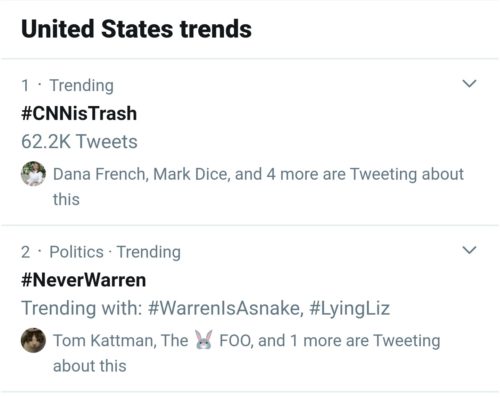 I wouldn’t underestimate how this feud is playing out between the two camps, even more so from their rank and file supporters than their campaign spokespeople. Supporters of Sen. Sanders are still raw over how the DNC gamed the primary system for Hillary Clinton in 2016, and that has carried over to his 2020 presidential candidacy as well.

All that anger and rage will fuel more negative official and unofficial reports about Warren’s history at a time where she needs all the positive press she can get.

But as Prof. Jacobson has documented, Warren has earned every bit of scrutiny she’s receiving in the debate over what happened at that December 2018 meeting.

Warren has no one to blame but herself for all the backlash. She has a history of not being honest with voters about her past. Those include her false claims of Native American heritage, that her children only went to public school, and allegedly being let go from a teaching job because she was pregnant.

Even if Warren told the truth about her conversation with Sanders, she’s made it harder for people to believe her. Thanks to conservative sleuths, new media websites, and President Trump, Democratic voters know she’s not above telling a whopper or two at the expense of other candidates to get ahead.

Seems discord does exist on the left.

notamemberofanyorganizedpolicital in reply to 2smartforlibs. | January 15, 2020 at 1:02 pm

Just wait till we get the transcript of Warren chewing out Bernie from the “LIP READERS.”

RE: “Unfortunately, what exactly was said isn’t known to anyone..”

Michael Moore: Warren Stuck A Knife In Bernie’s Back…

When the DEM top Critters are worried…..
You can be glad they’re worried about 10 years TOO LATE!!!!!

Van Jones On Democrat Debate: “I Came Away Feeling Worried For The Democratic Party”

CNN takes marching orders from the DNC, who wishes Bernie would just go away. And Warren is on the war path with Bernie …. she just forgot to apply her war paint.

As CNN takes up the DNC cause to keep the nomination out of Sanders’ reach, we can only expect that MSNBC will pick up the beat when they are cued… This is like 2016, part 2.

I wonder if Bernie will take this sitting down or will he say “enough is enough” and let his Independent status send him to running 3rd party. Will he get to the point that he says F-you Dems, you want to cheat me again, do it on your own. I’d rather Trump win than reward you with the prize.” ?

If Bernie went 3rd party he would take a lot of voters with him and it is not fantasy, if that happened, Trump could even carry CA — with the Dem votes split. That would be a hoot.

Bless her heart. LOL! Stacey Matthews, you MUST be from the south:).

Wait. There was a debate?

notamemberofanyorganizedpolicital in reply to The Friendly Grizzly. | January 15, 2020 at 6:01 pm

The DEMS have more Debates than two dogs in heat do….

TURN THE HOSE ON THEM!

Indians don’t shake hands. They raise hand and say, “how.” Then hold out other hand and ask for heap big wampum (info obtained from Warren’s Pure Blood Native American site).

She was pretty riled up last night. Her usual rude stage presence, while Bernie did a fine job imitating a crazy old commie rabble rouser. Klobuchar, apparently, was the only one who did a lot of things, and even predicted the hit on Soleimani by Trump. Biden saw a lot of yellow lights and used the “word cloud” debate strategy. No one else showed up.

I have no love for Sanders, but, Warren is a childish and vile crone, a transparently miserable fabulist and a self-aggrandizing apparatchik, demagogue and all-around scold/nag/termagant/harridan/shrew.

The Democrats are in a real dilemma with Bernie. He is their Jeremy Corbyn. He has a fanatical base who will turn out for him in the primaries, while none of the others do. However, he probably is unelectable in the main. Still, a lot of the primaries are his because of the naive youth vote.

Everyone agrees that Uncle Joe is the least threatening choice to Undecided Voters… but they don’t vote in Primary Elections. So, can he get as far as the main? This is not to mention any possible damage to him via the Impeachment hearings True or not he is going to drag a can full of Hunter Biden with him everywhere the sweet old idiot goes. No clear wins for him in the primaries. The Presidency? Maybe, but I think there’s just too much malarkey and senility to ignore. Imagine a debate between him and Trump….(giggle).

So that leaves Warren -but who is her base? She is unlikable as a personality, and her Socialist promises of Free Stuff©️ just seem less believable than Bernie’s… perhaps because it’s so obvious that she lies about things (seriously). The young socialists are going Bernie. The Centrists are going Biden. Still, if she can survive the primaries she is probably the most electable of the bunch, assuming she gets ALL the Democrats to turn out for her. time. I don’t think there’s any enthusiasm for her among Blacks or Latinos… So the only way for her to get to the main is a brokered convention.

The only way to make that happen is slur both Biden and Bernie. Biden is taken care of…just wait and watch the next two weeks. Bernie must be actively and heavily attacked and last night was just the start. He will not be permitted a clear win; just as last time with Hillary, he must be shut up and/or bought-off.

The problem is, if Bernie is bought-off or cheated by the Democrats -again- I don’t believe his supporters are going to run over to ‘Lizbeth’s (I hope I am spelling her Indian name correctly) wagon. I think they just stay home at election time.

“…he must be shut up and/or bought-off.”

How many houses does this guy need?

You can bet there are tens of thousands of Bernie supporters just as crazy as the campaign staffer James O’Keefe exposed yesterday. Crazy Bernie is really starting to scare the DNC.

What happened to Peter Paul of South Bend, IN (a Chicago city sewer outlet)?

Regarding what Sanders said/did not say about the possibility of a woman being elected president: As Hillary Clinton would say: “At this point, what difference does it make.”

But it’s great to see Democrats hating Democrats. CNN has long tried to influence the electoral process: Candy Crowley in the 2012 debate and Donna Brazile leaking debate questions to Hillary.

The Dems are making it easier and easier for the “Evil Orange Man.”

Clearly, we now understand how Liz got her moniker, Fauxchahontas. Steyer is nearby so he can learn from two progressives destroying themselves, and to pick up any intel he can on what NOT to do. Bernie supporters got burned in the last election cycle by Hillary, and obviously Warren’s team are hoping to replicate what Bernie didn’t learn the first time. So as they go about destroying each other, this leaves room for creepy Uncle Joe, and billionaire Tom Steyer, who can dictate what we should all do for climate change, etc., yet sits on his own money.