Warren denies that either of her children attended private school: “No my children went to public schools” 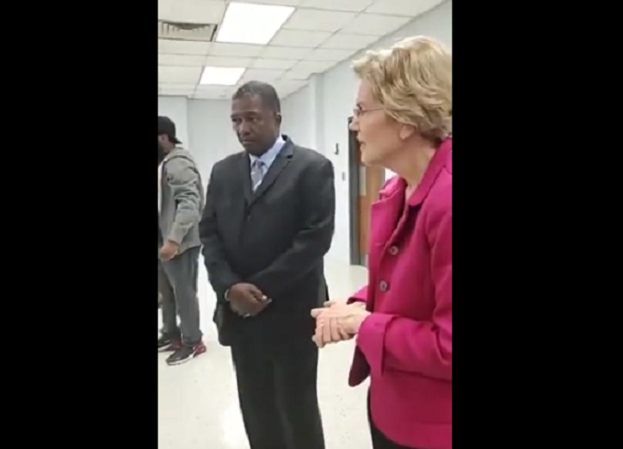 Elizabeth Warren is having a terrible, horrible, no good, very bad week.  Not only were her long-delayed Medicare for All plan and its subsequent revisions met with incredulity and ridicule from both the left and right, but her poll numbers are tanking in the very states she most needs right now:  Iowa and New Hampshire.

Already widely seen as disingenuous and phony, Warren has compounded this impression with her most recent unforced error.  Confronted by a pro-school choice activist, Warren insisted that her children had gone to public schools.

Holy shit. I have Warren on video lying about where she sent her kids to school.

Sarah Carpenter: "I read that your children went to private schools"

Warren: "No my children went to public schools" pic.twitter.com/PEHr3jNvjx

Here it is if you can’t view it in the above tweet:

This is partially true, but it’s also partially untrue given that her son attended public school only until fifth grade, when he was moved to a tony private school.

Confronted by a school-choice activist Sen. Elizabeth Warren (D., Mass.) denied sending one of her children to a private school, though her presidential campaign later told the Free Beacon that her son, Alex Warren, did in fact attend private school.

Sarah Carpenter, a pro-school choice activist who organized a protest of Warren’s Thursday speech in Atlanta, told Warren that she had read news reports indicating the candidate had sent her kids to private school. Though Warren once favored school choice and was an advocate for charter schools, she changed her views while seeking the Democratic presidential nomination.

“We are going to have the same choice that you had for your kids because I read that your children went to private schools,” Carpenter told Warren when the two met, according to video posted to social media, which was first identified by Corey DeAngelis, director of school choice at Reason Foundation.

A school yearbook obtained by the Washington Free Beacon indicates, however, that Warren’s son, Alex Warren, attended the Kirby Hall School for at least the 1986-1987 school year, Warren’s final year as a professor at the University of Texas at Austin. The college preparatory school is known for its “academically advanced curriculum” and offers small class sizes for students in grades K-12. The yearbook indicates that Alex Warren attended as a fifth grader.

A statement from Warren’s campaign does nothing to improve the optics here.

“Elizabeth’s daughter went to public school. Her son went to public school until 5th grade,” Warren communications director Kristen Orthman told the Washington Free Beacon. “Elizabeth wants every kid to get a great education regardless of where they live, which is why her plan makes a historic investment in our public schools. Every public school should be a great school. Her plan does not affect funding for existing non-profit charter schools, but she believes we should not put public dollars behind a further expansion of charters until they are subject to the same accountability requirements as public schools.”

Warren’s public school “plan” and its opposition to school choice for underserved, largely minority, students may have been the impetus for Carpenter’s challenge, but it’s now been overshadowed by what many perceive is simply more disingenuousness from a fundamentally disingenuous person.

Adding to an already bizarre situation in which Warren apparently fibs about her son’s education in a private school, Warren went on to undermine her own K-12 education plan.

Somehow it all went to the state government and never made it down!" pic.twitter.com/JNkUNNfaVs

As the conversation with Carpenter continued, Warren made the case against her proposal to eliminate charter schools.

“Well, listen, I understand that, I got an increase in child care development bloc grants, and 85 percent, I told all my folks back in Massachusetts ‘you’re gonna get an 85 percent raise at all of our low child development centers.’ You know how much of a raise they got? Zero,” Warren said.

A new report shows Warren is falling behind Joe Biden and Sen. Bernie Sanders in national polls. But, when she campaigns on eliminating charter schools — the greatest equalizer in education for minority students — it’s no wonder she’s falling behind Biden and Sanders. It’s not only her out-of-touch, horrid plans, now, it’s the deceit and lies that are leading to her downfall.

They don’t call her Lie-A-Watha for nothing.

It is too bad that SNL is no longer funny because a great skit would be Warren stuck in an elevator with John Lovitz’s perennial liar character.

Wait. Shouldn’t they have gone to tribal school? After all, Fauxcahontas is a genuine WOC and the first such on the Harvaaahd faculty, right?

This woman is such complete scum. How the GOP didn’t not bust her years ago?

and the press consider Warren a pro-business moderate.

When confronted with an uncomfortable situation, her first instinct is to lie her way out of it. It is just her nature.

Heh, I just wrote a bit for the LI Newsletter that says essentially this. It’s really weird how her first response when challenged is to lie or deny. She’s like a kid caught with her hand in the cookie jar and insisting that she’s not doing anything. It’s kind of cute in a five-year-old, not so much in a presidential candidate.

Driving past a used car lot the other day, I saw a fifteen-foot high model of her. She was waving her arms high in the air and jerking around spastically, just like she always does. To keep here moving they had to keep blowing hot air up her bottom.

“The thing about a lie is it’s pretty much the same as the truth.”