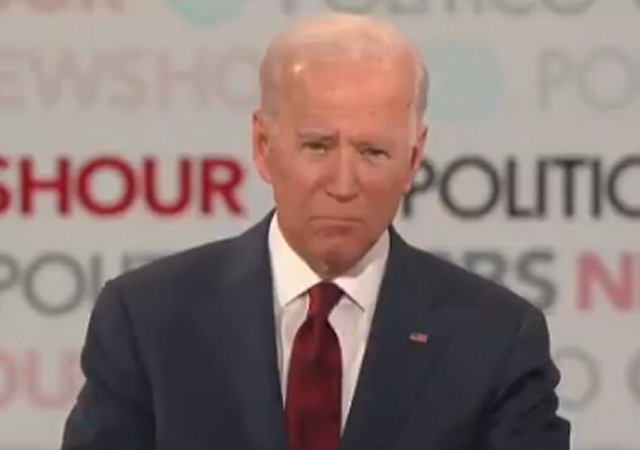 Former Vice President Joe Biden (D-DE) is still hanging on to the top slot in the 2020 presidential primary clown car.  Biden has recovered from a disappointing third quarter fundraising slump and is still leading the Democrat field in most polls.

But he clearly understands that he’s not there because Democrat primary voters are clamoring for his special brand of creepy, handsy buffoonery.

Therefore, I read this headline from CNN with much amusement:  “Joe Biden says he would consider a Republican for his running mate.”  He said he “can’t think of one right now,” but that’s hardly surprising since he couldn’t name one female Democrat he’d consider, either.

Joe Biden told voters in New Hampshire on Monday that he would consider choosing a Republican as a running mate, but added, “I can’t think of one right now.”

Biden discussed the possibility after a woman told the former vice president that if he is the nominee, he will “have to pull out all the stops.”

“Our 21-year-old son said the other night, ‘I wonder if Joe Biden would consider choosing a Republican as a running mate,” the woman added.

“The answer is I would, but I can’t think of one now,” Biden replied. “Let me explain that. You know there’s some really decent Republicans that are out there still, but here’s the problem right now … they’ve got to step up.”

Why would he say this?  Is this another in the long (long) list of Biden gaffes?  Or is he really feeling that his job destroying, big government, Obama throwback message is not breaking through and he needs a Republican, of all things, to attract voters?

Who knows?  It’s Biden, after all, but if he is serious, can you just imagine the “Republican” he would pick?  It certainly wouldn’t be a solid conservative like Sen. Ted Cruz (R-TX) or Rep. Matt Gaetz (R-FL).

No, Biden would go for a Republican like Mittens McRomneyCare (R-MA, UT, Wherever He Can Win).

Or maybe he’d really think outside the box and select a prominent #NeverTrumper like Bill Kristol or Kellyanne Conway’s husband.  Or maybe, for a bit of diversity, female #NeverTrumpers like a Jennifer Rubin or an SE Cupp.

Whomever he chose, he’d enrage both the left and the right, so it’s a pretty safe bet that this is just Joe being Joe and burbling nonsense.

Gropey Joe needs to just go pick out a comfy chair. He’s not going to be the nominee.

Don’t bet on it. This is basically a throwaway election for the ‘rats unless their fraud machine is up to the task.

notamemberofanyorganizedpolicital in reply to Lanceman. | December 31, 2019 at 1:47 pm

But what RINO would run as Joe’s VP now that this will be the established chorus at all of Biden’s Rallies?

Lotsa RINOS out there.

A Republican running mate for Joe?

So many excellent choices!

Well Mueller says he is a Republican. You both have much in common…if you could remember what it was.

I think quid pro joe is emulating lizzie warren anymore.
Truth never was a big thing with dems but it seems to have totally disappeared from their party planks as liability to the agenda.

Your positive use of “anymore” makes me think you are from Pennsylvania. Am I close?

C’mon… ya’ll know Romney would jump at the chance.

The winner right there! Romney will never be elected president. His only hope is VP to an old and feeble president who doesn’t have long to live. Losing ticket but come on Romney! Say yes anyway!

Haha, well Sarah Palin might be able to help him along in his late years. She sold her soul to run with McCain, how much worse would hanging with Biden be?

OTOH, Hillary probably has some “republican” friends and that would easily qualify her as a possibility. She would make short work of him and she could probably show DOKTOR Jill a good-time, in due course.

I think that this fits in with Joe’s pitch; he wants to be ‘the great healer’ who goes back to the Bush and Clinton days where moderates ruled the jungle and there wasn’t much difference between the parties.
However, the Democrats burned that jungle to the ground with their attacks on Republican moderates. I mean, they hated Romney and that guy is as close to a moderate Democrat as exists today.

Now both parties are ‘polarized’ and “Middle of the road guys get run over.” I think that is what will ultimately happen to Joe. I really don’t see him surviving the primaries; I believe we will see a showdown between Warren and Sanders.

Well Joe, your dance card seems to have no partners. Obama for the Supremes, some RINO for the VEEP, and still no one seems to care who you partner with. Keep dropping the chum in the water and just maybe someone will be interested.

At this point I honestly expect it to be Romney.

The shitstain has never gotten over the fact that nobody cares about him after Trump showed what a pathetic loser he was.

He owes Trump for his current Senate seat. And he can’t STAND that.

Maybe he can select Ana Navarro.

He just forgot McCain is dead…

Well, if dead people can vote, they should be able to run, too.

If they put Ted Kennedy on a ballot in MA, he would win by a landslide. hell, he could even have Mary Jo as his running mate!

The title for this entry is incomplete. It should read:
“Joe Biden Says He’d Consider a Republican Running Mate when Hell Freezes Over in July.”

The hardcore lefties will not support him choosing a GOP running mate.

But I do wish it was Romney. So we can bring out the binders and the dog again. LOL

Why would he say this? Is this another in the long (long) list of Biden gaffes? Or is he really feeling that his job destroying, big government, Obama throwback message is not breaking through and he needs a Republican, of all things, to attract voters?

Neither one. He said it because he was asked the question, and wanted to look reasonable. To reject a Republican out of hand would have made him appear like an extreme partisan, so he acknowledged that in principle he could be open to a Republican, provided the person agreed to all his leftist positions. The only “Republicans” he’d actually consider would be Democrats who falsely claim to have been Republicans, like Richard Painter or James Comey.

A Biden/Painter ticket? Now that thaar would be a glorious dumpster faar!

Biden belongs in prison with obama, kerry and pelosi.

This traitorous perv is more inclined to pick a 15 year old girl, for obvious reasons.

“Let me clarify: I thought the question was about jogging.”

“He said he “can’t think of one right now,” but that’s hardly surprising since he couldn’t name one female Democrat he’d consider, either.”

It doesn’t matter to Biden as he would not remember who his running mate is anyway.

The person needs to be a gay transgender black that identifies as a white Hispanic that was abused by an uncle. Did I leave anything out?